The Blog Most Likely To...

When considering what to do for this tour, I almost went with the tried and true: The blog most likely to hate love triangles. Discuss love triangles at length etc. etc.

But then I decided to pick something different that is a little less obvious. Let's change things up a bit. So without further ado, I'm

The Blog Most Likely To Edit Published Posts

Here's how it goes. I will spend hours writing a post, feel like it's "ready," set it up to publish at midnight (could be the next day or weeks in the future), and then wake up the morning after the post went live and decide to edit it even more. It doesn't matter if I previously thought it was as good as it could be, there's something about the urgency of knowing a post is already live, that makes me see it a little bit differently (more clearly?). I don't usually make drastic changes to a post, but even small things seem really important for me to fix ASAP!

I've always worked best as the pressure is building, and editing a review last minute fits right into that. Pretty much the only way for me not to do this is if I don't re-read my post in the morning, or ever be tempted to look at older posts.


Do you ever edit your posts after you publish them?
Sometimes I think I could tinker with mine forever if I didn't make myself let them go.
(And yes, I edited this post after it was published.)


A few more general thoughts on my post/review writing:

1) When I started blogging, I spent 2-3 hours minimum writing each review. It took at least half the time that reading the book did - sometimes more. Part of this is because I wanted to include my thoughts on everything, the longer the review the better. I've never been a quick writer, either. Breaking down my feelings about a book into coherent points and then forming those into paragraphs feels overwhelming sometimes. But I'm working on it!

2) I've been trying to be less neurotic about reviews these days. Writing them out (or at least a quick listing of thoughts) as soon as I finish a book, helps a lot. I actually like shorter to the point reviews, and I'm less afraid to attempt them than I was a few years ago. Although, they're not a strength of mine.

3) To me, anything that expresses personal thoughts on a book is a "review." I don't really understand why people say their book reactions aren't reviews, and how that differs from people who claim their thoughts are reviews. Maybe I just don't get the nuances. I'm not sure what mine are, in any case. But that's not something that worries me greatly.

4) Every time my husband reads through one of my posts he finds a grammatical error (and I am very grateful when he kindly lets me know). Usually a missed word. No matter how often I read through them, I always miss something!  If there's time, I'll have him read my posts before I publish them.

Don't miss the book that inspired this post coming August 18!

I've already read and loved The Boy Most Likely To. 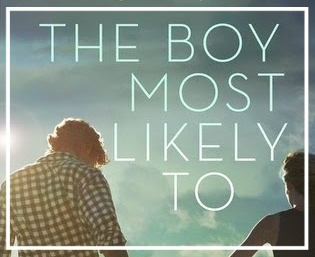 About the book:
Tim Mason was The Boy Most Likely To find the liquor cabinet blindfolded, need a liver transplant, and drive his car into a house
Alice Garrett was The Girl Most Likely To . . . well, not date her little brother’s baggage-burdened best friend, for starters.
For Tim, it wouldn’t be smart to fall for Alice. For Alice, nothing could be scarier than falling for Tim. But Tim has never been known for making the smart choice, and Alice is starting to wonder if the “smart” choice is always the right one. When these two crash into each other, they crash hard.
Then the unexpected consequences of Tim’s wild days come back to shock him. He finds himself in a situation that isn’t all it appears to be, that he never could have predicted . . . but maybe should have.
And Alice is caught in the middle.
Told in Tim’s and Alice’s distinctive, disarming, entirely compelling voices, this novel is for readers of The Spectacular Now, Nick and Norah’s Infinite Playlist, and Paper Towns.

Find: Goodreads | Amazon | B&N | Book Depository | Indiebound
Posted by Lauren @ Love is not a triangle at 12:00 AM