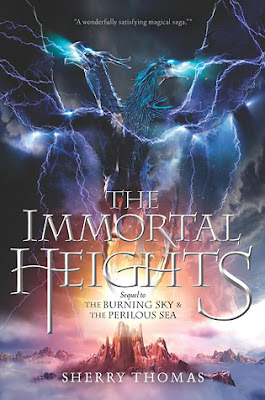 The Immortal Heights
by Sherry Thomas

In a pursuit that has spanned continents, Iolanthe, Titus, and their friends have always managed to remain one step ahead of the forces of Atlantis. But now the Bane, the monstrous tyrant who bestrides the entire mage world, has issued his ultimatum: Titus must hand over Iolanthe, or watch as his entire realm is destroyed in a deadly rampage. Running out of time and options, Iolanthe and Titus must act decisively to deliver a final blow to the Bane, ending his reign of terror for good.

However, getting to the Bane means accomplishing the impossible—finding a way to infiltrate his crypt in the deepest recesses of the most ferociously guarded fortress in Atlantis. And everything is only made more difficult when new prophecies come to light, foretelling a doomed effort....

Iolanthe and Titus will put their love and their lives on the line. But will it be enough?

Find my reviews of the first two books in this series: The Burning Sky and The Perilous Sea.

I never know what to expect when I get to the conclusion of a series. They used to excitement me(!). I'd have a sense of accomplishment as I followed the characters to their end, putting the final pieces of the puzzle together and watching them defeat evil and be left in peace and love, finally. I'm not ashamed to admit that I'm all about the romance and HEAs. But I've experienced some not so pleasant endings, where my hopes and expectations went wildly off course from what the author had planned. Thankfully, this was one of the former experiences, and I was very pleased with how The Elemental Trilogy has turned out. Book two, The Perilous Sea remains my favorite of the series. But The Immortal Heights is a solid conclusion with plenty of danger, deception and intrigue.

Three things that stood out to me about this book:

1) I looooove Titus and Fairfax. This is exactly what I look for in a series for romance. No love triangles! Lots of swoon! And a couple who builds and works together without unnecessary drama! These two aren't perfect, and they have some major disagreements, but I love that they're always fighting for each other despite that. Any moments of tension between them worked well for me. Fairfax's anger comes out after Titus does something she doesn't agree with, a move I've seen many a hero pull, and I was cheering her on for not letting him get away with it. I adore that they're not afraid to confront each other's stupidity, and how much of a team they are.
2) This book has a lot of information downloads. I wasn't ever bored, but heavy world building has been a characteristic of the series from its beginning. I think these books would work best read back to back with all the background details and characters one must remember, but I've read them each as they've released without rereading and have managed to keep up. Also, I did notice more Harry Potter similarities in this one, especially with the (spoiler>>) evil villain obsessed with immortality that the characters must take down (End spoiler).


3) Although I'm in love with the main characters in this story, Kashkari is right up there with them. He is the other star of this series for me and goodness I ached and cheered for him. I wish so much that (spoiler>>) Kashkari had been more lucky in romance though, his storyline was painful! This story actually had a large number of experiences of unrequited love (End spoiler).

I definitely recommend this trilogy. A solid fantasy series with beautiful covers, a historical, magical setting and not a hint of a love triangle anywhere inside of it. Get your copies asap!