The Masked Truth by Kelley Armstrong 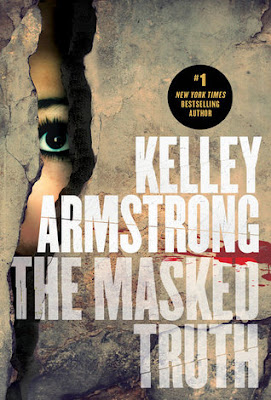 The Masked Truth
by Kelley Armstrong

In this heart-stopping suspense thriller, #1 New York Times bestselling author Kelley Armstrong proves herself to be a master of terror and suspense.

Riley Vasquez is haunted by the brutal murder of the couple she was babysitting for.

Max Cross is suffering under the shadow of a life-altering diagnosis he doesn’t dare reveal.

The last thing either of them wants is to spend a weekend away at a therapy camp alongside five other teens with “issues.” But that’s exactly where they are when three masked men burst in to take the group hostage.

The building has no windows. The exits are sealed shut. Their phones are gone. And their captors are on a killing spree.

Set-up
Riley Vasquez has had a difficult year and a half. Her cop father died while on a job, and then months later, the couple Riley was babysitting for was brutally murdered while she was in the house with their child. Now Riley is suffering from PTSD and survivor's guilt, despite being lauded as a hero. This weekend she's agreed to attend a therapy camp with five other teens in a newly renovated warehouse, hoping it will help her overcome some of her "issues." Max Cross is one of the teens also attending a weekend away. He has his own reasons for being at the weekend camp, but completely refuses to share what they are.

During their first meeting at the camp, three masked men take the entire group hostage. The building has no windows and all the exits are sealed shut. Because no one was allowed to bring a phone to the weekend, they have no way to contact anyone. Everything quickly spirals out of control on both sides as the captives panic and the captors go on a killing spree. Riley and Max are determined to find a way out before they're the next victims.

Breakdown
The Masked Truth does a great job at intensity, and it just increases as the story continues. I did not expect where the plot was going, and I kept freaking out as I encountered another unseen twist. The whole situation was even more terrifying because of Riley and Max's personal issues. Riley's PTSD and Max's diagnosis, as well as all the things the two of them have already experienced, made me even more worried for them. But I was also proud of them for how well they handle the extreme situations they encounter. Max and Riley are forced to rely on each other under very stressful circumstances that just keep increasing, and I love how they support each other unwaveringly throughout this book.

Amidst all the crazy happening, a romance slowly blooms between Riley and Max. I think the author did a great job balancing it within the thriller plot. It doesn't overtake what's going on, but compliments it well. And I could totally understand how these two people brought together under extreme circumstances, who already feel broken from their pasts, could come to rely on each other. I wanted so much for both of them to be okay.

This was the first book by Kelley Armstrong that I've read and it's made me an immediate fan. I'm not sure if edge-of-your-seat thrillers are her regular genre, but this was excellent! I would definitely recommend The Masked Truth!