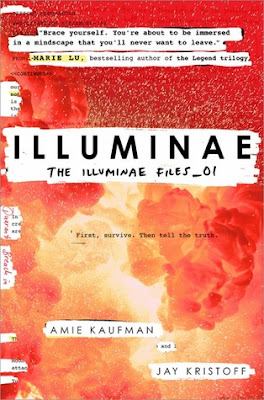 This morning, Kady thought breaking up with Ezra was the hardest thing she’d have to do.This afternoon, her planet was invaded.The year is 2575, and two rival megacorporations are at war over a planet that’s little more than an ice-covered speck at the edge of the universe. Too bad nobody thought to warn the people living on it. With enemy fire raining down on them, Kady and Ezra—who are barely even talking to each other—are forced to fight their way onto an evacuating fleet, with an enemy warship in hot pursuit.But their problems are just getting started. A deadly plague has broken out and is mutating, with terrifying results; the fleet's AI, which should be protecting them, may actually be their enemy; and nobody in charge will say what’s really going on. As Kady hacks into a tangled web of data to find the truth, it's clear only one person can help her bring it all to light: the ex-boyfriend she swore she'd never speak to again.Told through a fascinating dossier of hacked documents—including emails, schematics, military files, IMs, medical reports, interviews, and more—Illuminae is the first book in a heart-stopping, high-octane trilogy about lives interrupted, the price of truth, and the courage of everyday heroes.
______________________________________________________________________________

I'm not sure how to review Illuminae. It's crazy and epic and not to be missed at all. Instead of a proper review, here are 10 thoughts I have after finishing the book:

2) This book has some huge revelations. Like punch you in the stomach, then gouge you in the spleen while ripping out your heart type. They just keep coming. I'm not sure I've recovered yet.

3) This book features the scariest plague I can imagine. I actually started wishing I could don one of those special space enviro suits while reading this, just in case! But I'm not even sure the plague's the most frightening thing in these pages. Way to go big with those imaginations, writers.

4) I LOVE that Illuminae is told through collected documents. I wasn't sure I'd be able to follow a story that way, but it ended up being extremely engaging and very readable. It's also quite clever, and I'm fascinated by how the authors wrote and put it all together. Thinking back, I have to remind myself it wasn't written as a typical narrative, because it flowed so well.

5) Kady is badass. That girl is incredible. She could give any of those dystopian chicks a run for their money. Goodness gracious she's amazing. I'd be curled up in a fetal position with all she faced. I basically was just while reading the book. But she doesn't stop, despite some of the worst odds you could ever imagine. But Kady's not a machine and she has some quite moments of desperate feelings too. Who wouldn't with all she's faced? I love her more for that.

6) I was surprised how much I enjoyed the romance, though it begins with a break-up and has a lot of separation and many bad things occur along the way. Did I mention that no one is safe? But the authors made it work despite all of that. And no love triangle. YAY.

7) I became fascinated by the height difference between Kady and Ezra, who is also awesome by the way. She's 5 feet and he's 6'5" (Think Hayden Panettiere and her husband).  I don't know why, but knowing that detail made the story and these characters even more incredibly real to me. These two are very different but their strengths and weaknesses counterbalance each other well. And both of them surprised me.

8) Thankfully after the incredibly intense story, the ending isn't a crazy cliffhanger. Not all is solved, but it's not a moment where you feel like you're on the edge of a cliff. More like you've found a nice resting platform before you have to go off the ledge again. This time to a steeper drop!

9) One of the only slight concessions I'd make about this book is that some things about it reminded me of These Broken Stars, Amie's other co-authored series. The way parts of the story are set up. I don't want to spoil anything by giving specifics, but I did have some moments of déjà vu.

10) This is the type of book you want to re-read once you've finished it: a) because it's awesome and b) because you'll want to read it again knowing what you didn't know before.


Love Triangle Factor: None
Cliffhanger Scale: Low - but I can feel the energy building to a lot more drama to come! Book two will be a sequel/companion...if anyone from the first book survives.