The Anatomical Shape of the Heart by Jenn Bennett 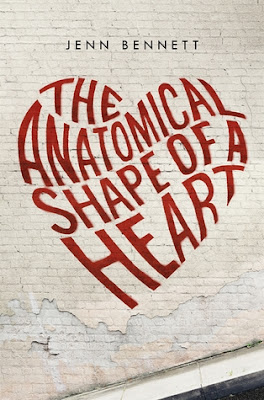 The Anatomical Shape of the Heart
by Jenn Bennett

Artist Beatrix Adams knows exactly how she's spending the summer before her senior year. Determined to follow in Leonardo da Vinci’s footsteps, she's ready to tackle the one thing that will give her an advantage in a museum-sponsored scholarship contest: drawing actual cadavers. But when she tries to sneak her way into the hospital’s Willed Body program and misses the last metro train home, she meets a boy who turns her summer plans upside down.
Jack is charming, wildly attractive . . . and possibly one of San Francisco’s most notorious graffiti artists. On midnight buses and city rooftops, Beatrix begins to see who Jack really is—and tries to uncover what he’s hiding that leaves him so wounded. But will these secrets come back to haunt him? Or will the skeletons in Beatrix’s own family’s closet tear them apart?
__________________________________________________________________________

Set-up Bex Adams meets Jack Vincent one night while waiting for a late train after a failed meeting with a professor. She wants to get permission to draw cadavers in the hospital's Willed Body program, which is just the first step in her plan to apply for a scientific scholarship and eventually go to college to be a medical artist. Jack is waiting for the same train dressed head to toe in black, and everything about him screams he's up to no good. This is confirmed when spray paint falls out his bag, linking him to a wanted graffiti artist who's work has been popping up all over the city. It's a shame he's so attractive and charming, and appears to be just as fascinated by Bex as she is with him. Bex expects never to see him again, but, thank goodness, that doesn't happen.

Breakdown I enjoyed this story so much! After a few rough moment at the very beginning (Bex was sort of mean at first, and then I was worried that Jack was going to flake out bad boy style. I also thought Sierra caused more angst than warranted), The Anatomical Shape of the Heart ended up being wonderful. I loved Jack. Swoon! Goodness. He and his tattoos and secret graffiti stole my heart of sure. I also thought Bex was a great heroine too. I admire her talent and her drive, as well as the way she goes after what she wants - including Jack.

Even more exciting, the story builds tension well and though there's drama in the second half, there's no Big Break! These two managed to forge ahead and work through their problems. WHAT! I also love how much Bex and Jack communicate with each other, both serious conversations and fun banter. And they both have moments where each of them goes after the other - I love how straightforward and honest they were about their feelings. This book gave me flutters all the way through.

I adored the San Francisco setting. It's clear the author knows the city well, and I enjoyed exploring it with these characters. Also, I was fascinated by both Bex and Jack's interest in the arts and how those played through the book. It made them relate to each other better as well. This is the second story I've read recently that has focused on mental illness, most specifically, schizophrenia. Reading two books close together featuring this disorder has made me think more about how complex mental illness is in general and schizophrenia in particular.

I really wish this book came with visual images, because I'm dying to see Bex's art and Jack's graffiti for myself. But I love imagining them living in San Francisco together, inspiring each other and creating beautiful things. Don't miss this one!