The Raven Cycle by Maggie Stiefvater - An Audio Reread 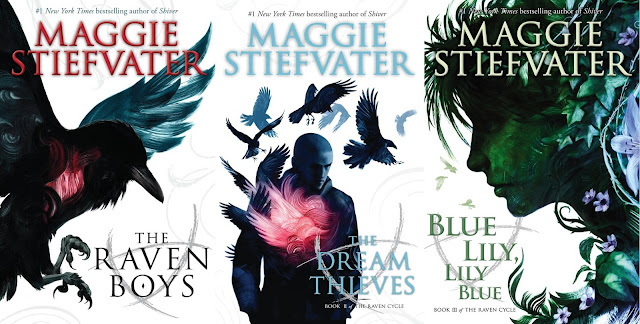 NOTE: This post is for people who have read The Raven Boys, The Dream Thieves and Blue Lily, Lily Blue already. I tried not to give away anything vital, but this is not a comprehensive overview, and it has been written for people who know (and love) these books.

In case you've forgotten what this series is about. Here are the author's words herself:

"I have to say that blurb on the back of maggie stiefvater’s book The Raven Boys doesn’t do it justice." I fixed it: pic.twitter.com/9IzGqNiO0r
— Maggie Stiefvater (@mstiefvater) November 25, 2015


I just finished rereading the first three books in The Raven Cycle via audio, and it was the most delicious experience. I tried to savor it as long as possible, but alas, the words have come to an end. Now am even more obsessed with Blue, Gansey, Ronan, Adam, Noah and basically everything else, and suffering from major Henrietta withdrawal.

For me, rereading is always a very different experience from the first time I pick up a book. When I read a story for the first time, I'm focused on What Is Going to Happen and Answers along with getting to know the characters and their world. But the second time through, I'm able to dig in and spend time with the story and the people in it, more than I'm gathering information, although that is always happening too. My focus is a bit different, and my perspective is wider, because I already know what is to come, and that changes my experience.

Experiencing a reread though audio adds another layer of richness to a story, even more so when it is a good narrator. Thankfully, Will Patton did an amazing job bringing the Raven boys to life. Honestly, I was not sure how I was going to like an older male actor as the reader, but now I am in love with his voice. For many of the characters, I hear his version in my head when I think of them. That is always a testament to a good audiobook narrator.

Below are some general thoughts I had after completing these three books for a second time, elements that stood out to me or were different than the first time I read this series.


This time through the series

1) I was struck by how Stiefvater's characters are very honest about their own truth. In other words, they say what they mean and mean what they say. Even Stiefvater herself has stated this point repeatedly. 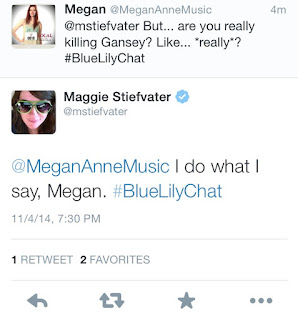 Some examples of "I do what I say" from the series: 1) The first thing Noah says in The Raven Boys is that he's dead. 2) Mr. Gray tells Maura he's a hit man. 3) Ronan says Chainsaw came out of his dream, though we all think he's being evasive. 4) Kavinsky states, "My favorite forgery is Prokopenko." I could keep going, but I'll stop there. All that is to say, this doesn't bode well for Gansey. I just hope Stiefvater has some tricky tricks up her sleeve and with the circular time, and dream abilities and wishes, Gansey won't be dead forever. PLEASSSEEE SAVE HIM!!

2) This goes along with what I stated above, but the first time I read this series I was focused on getting answers to the bajillion questions I have about it. I was even a bit disappointed with book three, because it keeps piling on the questions, with very little answers. And why I was reminded of my endless list of questions on my re-read, I didn't care about that so much this time. I think it's because we know what we know at this point in the series. Also, I've become increasingly invested in the characters and the lives, and I don't care anymore that I'm still clueless about most things. I just want to BE with them a little bit longer.

3) I like Adam MUCH better this time. I definitely went through a period thinking he was going to become a villain early in the first two books, and I just didn't connect to him well at all. But those things changed a lot on this read. That was partially due to Will Patton's reading, because he makes Adam's southern accent sound sweet and slow and dreamy. I also eagerly spent a lot of time looking for seeds of his future ship, and I definitely saw more of those, but they're very subtle still. Come on Pynch!

4) The almost triangle with Adam-Blue-Gansey actually bugged me more. I'm not sure why, maybe because I knew where things were headed and wanted to get to the part where my ships were headed in the right direction.  But it was really hard for me to read Blue's slow process to figure out who she did and didn't have feelings for and do something about it. This was one of two things that grated on me on this read.

5) The other thing that weighed me down a bit was the constant talk about money differences between the Haves (Ronan and Gansey) and the Have Nots (Adam and Blue). This is one of the reasons I didn't care for Adam on my first read of the series because he's obsessed with it. But this reading, I noticed how much the characters' differences in finances are brought up by more than just him. Though it was especially hard to watch Blue struggle with wanting in book three - not just for things that cost money, I appreciated when Calla (typically) told her to get over her whining. Also, it is interesting to see how the ship pairings are going despite/in spite of their social statuses.

6) HOWEVER, one of my most favorite scenes in this series remains when Gansey's family conspires to 'help' Adam without him knowing what they're doing. I have a vivid picture in my head of Adam trying to lug a 5 gallon rubber plant, while Gansey carries his tiny pot of mint to the car. Such a metaphor, that.

7) I have even more of an overwhelming feeling of dread going into the final book after rereading this series. There's no guarantee it's all going to turn out ok and there's been so much heartbreak and yearning between these characters already. I really want to cling to this recent Stiefvater text, because I'm desperate to want to reread the entire series again with audio and include the final book, but that will only happen if the last one ends in a way that I can handle. Stiefvater has done that for me with her other books/series, and I'm hoping that will happen again. Please, please make it all work out somehow!!

My goal is— and always was— to give you guys a book that you will keep under your pillow for the rest of your days. https://t.co/7r4IHcYqC0
— Maggie Stiefvater (@mstiefvater) November 15, 2015


Now, on April 26, 2016, two days after St. Mark's Eve, the night it all began with the prediction of Gansey's death, the final installment, The Raven King is releasing next year. I'm thinking I may have to reread these books again before then. 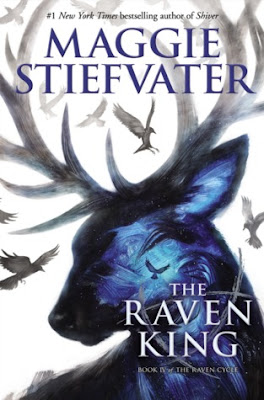 Have you reread this series?
Tell me some of the things that stood out to you on the second time through?
Or some of your most memorable parts from your first read.
Posted by Lauren @ Love is not a triangle at 10:09 PM