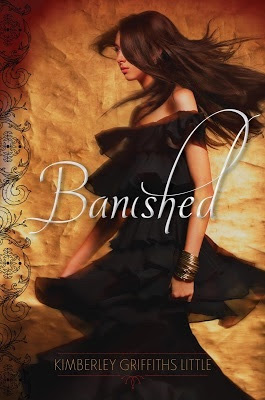 She thought she’d lost everything . . .After spending months traveling the harsh, unforgiving Mesopotamian desert, Jayden reunites with a broken, injured Kadesh. Although everyone was convinced the violent and unpredictable Horeb, Jayden’s betrothed, killed the handsome prince, Jayden knew in her heart that her love was alive and safe. But their reunion is short-lived, as they learn Horeb is on their trail and determined to take back the girl he has claimed. Soon, the two star-crossed lovers are on the run toward Sariba, Kadesh’s homeland, where, as heir to the Kingdom, he plans to make Jayden his princess.But the trek to Sariba is fraught with heartache and danger. After narrowly escaping being stoned to death for a crime she didn’t commit, and learning that her sister has disappeared, Jayden’s only solace is her love for Kadesh. But even he is keeping secrets from her . . . secrets that will change everything.This gorgeous and enchanting sequel to Forbidden, is full of love, danger, and heated passion that will leave readers breathless.
_________________________________________________________________________


Banished is the second book in the Forbidden trilogy. After a cliffhanger at the end of Forbidden, I was eager to get back to Jayden's world and find out what she was doing - and hopefully quickly reunite with Kadesh. Thankfully, the action starts up right away, and it isn't long before exciting things - and reunions are happening :).

I'm always wary that second books in trilogies will catch the dreaded middle book syndrome. Thankfully, Banished manages to stay love triangle free, while also continuing to build Jayden and Kadesh's relationship. They are even together most of the book, which is contrary to most middle series books books without love triangles (usually it's love triangle or a huge separation). For succeeding to avoid both those elements, I give this book major bonus points. However, while Banished manages to avoid many second book traps, it also falls into some of them.

First, the good - In Banished, Jayden continues to prove her strength and will as she travels across the sands to find Kadesh and then through a harsh journey with him to his homeland. This is a society where women do not often have a lot of power, but Jayden does not let that stop her when she is determined. I admire her a great deal in this book, especially as she stands firm and perseveres and is true to herself even when she's out of her depth in a new land and culture. The trip to Sariba and further look at this historical time period is another part of this story that I loved. This series continues to bring this ancient desert setting and culture to life in sensory detail. I especially enjoyed learning more about Kadesh's home, because I'd heard very little before about frankincense before. And it bears repeating that this book doesn't have any love triangles. YAY!

Then the not so good - Although this book has no love triangle, another boy named Asher is introduced, and his addition bugged me a lot through the first half of the story. Asher is assigned as Jayden's bodyguard and is present almost constantly. In name and action it least, he took the place of a pseudo second love interest, although it felt a too contrived to me. What I mean by pseudo love interest, is that Jayden and Asher were set up for a lot of one on one scenes, where they were put in situations you'd expect her to find Jayden in with a love interest, and it all felt a bit unnecessary. For example, Asher being assigned as Jayden's body guard and spending a lot of time with her, as well as (Highlight for SPOILERS) Asher saving Jayden by physically shielding her with his body, putting them in very close proximity; Asher finding Jayden dancing alone and bathing alone in different scenes. Asher also falls for Jayden, though she is always clear that she doesn't reciprocate (thank goodness for that at least!) Jayden naively brushes all these moments off, but I wish she'd talked to Kadesh about it sooner.

Second, I did not care for the fact that Kadesh kept some secrets about his life in Sariba from Jayden for as long as he did. Although I think he's a great love interest overall, that definitely affected how I saw him in this story. I thought his excuses for why he kept so much quiet, were pretty thin and I wanted to smack him for how Jayden was blindside by some information. But he does redeem himself well in the end.
Overall Banished is a good follow up to Forbidden. It succeeds in avoiding a lot of middle book issues, but also adds several that I thought were unnecessary.The story ends right at a very critical moment, and I'm eager to find out what happens in the conclusion.
Love Triangle Factor: NoneCliffhanger Scale: Medium/High.