Walk the Edge By Katie McGarry 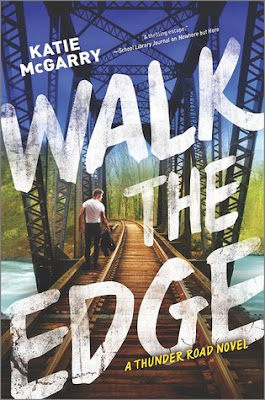 Walk the Edge
By Katie McGarry

Book Description: One moment of recklessness will change their worlds Smart. Responsible. That's seventeen-year-old Breanna's role in her large family, and heaven forbid she put a toe out of line. Until one night of shockingly un-Breanna-like behavior puts her into a vicious cyber-bully's line of fire—and brings fellow senior Thomas "Razor" Turner into her life. Razor lives for the Reign of Terror motorcycle club, and good girls like Breanna just don't belong. But when he learns she's being blackmailed over a compromising picture of the two of them—a picture that turns one unexpected and beautiful moment into ugliness—he knows it's time to step outside the rules. And so they make a pact: he'll help her track down her blackmailer, and in return she'll help him seek answers to the mystery that's haunted him—one that not even his club brothers have been willing to discuss. But the more time they spend together, the more their feelings grow. And suddenly they're both walking the edge of discovering who they really are, what they want, and where they're going from here.
___________________________________________________________________________

Walk the Edge is the second book in Katie McGarry's Thunder Road series. Nowhere But Here introduced readers to the Reign of Terror Motorcycle Club in rural Snowf, Kentucky, as well as Oz and Emily. One who couldn't wait to join the club when he turned 18 and the other who wanted nothing to do with that part of her heritage. They seemed an unlikely pair to fall in love, but of course they were wrong about that. Check out my thought on Nowhere But Here, HERE.

The second installment in the series, Walk the Edge, features fellow Terror member Thomas "Razor" Turner, whom we met in the last book, and Breanna Miller, seemingly Razor's opposite in every way. In addition to his membership a dangerous club, Razor is volatile and has a questionable family history, while Breanna is super smart, quite and the definition of the good girl. But when they have an unexpected encounter the night of senior year orientation, Razor and Breanna are thrown into each other's orbit, and the longer they're there, the more they realize that's exactly where they fit. But will cyber bullying, blackmail, and family secrets and drama have the power to pull them apart or into each other's arms for good?

What I loved - The Relationship
I was very surprised to discover how much of a book hangover I had, after finishing this story. Breanna and Razor (I prefer to think of him as Thomas, since Razor is not my favorite nickname, but I will respect his wishes and continue on) are one of my favorite McGarry couples. I loved how their relationship builds through honesty and communication. They actually work through issues and don't fall into the traps of miscommunication and angst. It was refreshing! Razor and Breanna seemed so different at first, but they both carry baggage that helped to form a strong connection between them, and surprisingly at first, they just get each other. I love when a story can show me why and how a couple works, beyond just physical attraction, and this one does that well.

Both Breanna and Razor belong to big 'families.' Breanna is number 5 of 9 children and though his immediate family only consists of him and his dad, Razor was raised by the motorcycle club. Although their families operate very differently from one another, and both had their own issues issues, they each learn something from each other. Though, I would say Breanna - and I - learned more from Razor's motorcycle club family than hers, because hers was mostly terrible (more on that below). But part of what this series does well is change readers' perceptions about what society sees as "bad" and "good," aka. a Motorcycle Club vs. a wholesome looking family.

Three things I didn't love so much - The Outside Influences
1) The Club - That said, I wouldn't say I'm ready to join the Terror Gypsies (the women's support group for the Reign of Terror). I find several aspects of the club to be baffling and distasteful - like the fact that women are mostly accessories and the club parties look like strip clubs. No WAY could I be with someone who was in one, and I've not been super thrilled at how much Breanna and Emily just had to shrug all that off for their guys - though I do appreciate that Razor was very open about his past 'relationships' and made a point to say multiple times that he would not cheat on Breanna. And I believe him. I keep hoping this club is going to make some policy changes and include more women in its operation, though I don't think that will happen. That said, I do love how much the club is like a family and always supports each other, and takes care of each other. And how they are legal in their dealings and really do try to keep the peace as much as they can.

2) Breanna's Family - I've got to say that the worst part of this book for me was Breanna's family. They are terrible. Her older siblings are horrible to her, and her parents ignored her for most of the book and left her to basically raise their younger children. And then when they realize their mistake, they become dictators. They completely lost that right, in my opinion. I know that Breanna didn't have a lot of choice because she's under 18, but she complied to their wishes way too easily, and the whole situation with them really set a negative tone for the very end of the book. I honestly couldn't see anything redeemable about them. Thankfully, I still ended up loving she and Razor as a couple.

3) Unresolved Plots - This book has a lot of unresolved storylines. Obviously the Violet and Chevy thing is still ongoing, but I mean well beyond that. We have a story teased over and over about something that happened 5 years ago with someone named Mia Ziggler, but it's never pursued much beyond a rumor. We have Kyle blackmailing Breanna* - another horrible side character and hard part of this book. He indicates at the end that there's something more to his actions than originally thought, but we never get the explanation of what is going on with him. Breanna's best friend Addison has a horrible home life, but that's never approached, beyond Breanna noticing that it's getting worse. And Pigpin's brother shows up at the end, though I'm assuming that is another plot that will continue into a future book. This is a companion series, so I'm curious to see how these stories play out in the future, but I don't remember this many side situations teased in Nowhere But Here.

*Addendum to point 3: I wasn't sure where to put this section, but the blackmailing part of this book was so stressful to read about. Kyle's behavior got increasingly more desperate and creepy. I do like that this situation helped to bond Breanna and Razor. However, (spoiler) I can't understand why Breanna or Razor never think to just blackmail Kyle back? Why didn't they take a video of one of his encounters with Bre and threaten to put that online? Kyle was very vocal to her about what he was doing. (end) That said, I do like how Breanna and Razor each dealt with the situation in the end, and how they both grew up and demonstrated their individual strengths because of that.

In Sum -
Although the "what I didn't love so much" section appears longer, I actually liked this book quite a bit, and I gave it 4 stars on Goodreads. Razor and Breanna and their relationship stands out to me as a favorite among McGarry couples, because of the way they compliment and communicate with each other. This book also appears to set up several storylines for the future that have made me super excited to read the next installment in the Thunder Road series.

Anticipating book 3: I'm very much looking forward to (and nervous about) Violet and Chevy's book, which is next. This is the first time we'll get to see McGarry tackle a second chance for a former couple (as she rightfully chose to give Isaiah and Beth new love interests). I'm VERY curious about their story, as it's already quite angsty and they've both hurt each other a lot recently. Most of the negative aspects of the Reign of Terror have been voiced by Violet, so I'm eager to see how that situation turns out. And I can't wait to see the meeting between Chevy and Isaiah, who, if I'm assessing this correctly, are going to discover that they're half brothers.