Early Review: Into The Dim by Janet B. Taylor 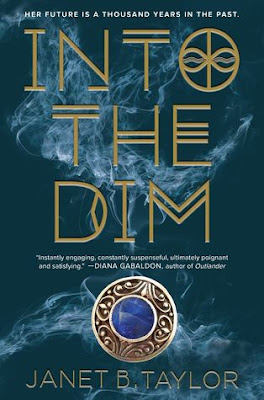 Book description: When fragile, sixteen-year-old Hope Walton loses her mom to an earthquake overseas, her secluded world crumbles. Agreeing to spend the summer in Scotland, Hope discovers that her mother was more than a brilliant academic, but also a member of a secret society of time travelers. Trapped in the twelfth century in the age of Eleanor of Aquitaine, Hope has seventy-two hours to rescue her mother and get back to their own time. Along the way, her path collides with that of a mysterious boy who could be vital to her mission . . . or the key to Hope’s undoing.

Addictive, romantic, and rich with historical detail, Into the Dim is an Outlander for teens.

Into The Dim is a book that I've heard a lot of excitement about. Although I don't think book comparisons are always accurate, the thought of an Outlander for teens, featuring time travel and set in Scotland, definitely sounded exciting to me (it's even blurbed by Diana Gabaldon!). However, despite my high hopes for this one, I came out with very mixed thoughts on it.

The Set-up - Hope has been raised by her academic mother in the South of the United States. But when her mom dies in a earthquake during an overseas speaking engagement, Hope agrees to spend the summer in Scotland with relatives she's never met. It is apparently a big deal that Hope is embarking on this trip, because she has been crippled by phobias her entire life. And yet, Hope seems to overcome these issues fairly easily right away. After Hope gets over the hurdle of actually getting on the plane to Scotland, I don't remember her phobias coming up much at all again.

In another sense, its easy for Hope to make the decision to leave, because she doesn't have any friends or ties to her home. Hope's mom homeschooled her and kept her sheltered, conveniently enough. Honestly I'm tired of this trope, and it didn't help Hope to stand out at all. Also, though we never meet her, I have huge issues with how Hope's mom raised her. Why did Hope's mom keep her sheltered, deny her friends - and almost encourage her phobias - if she was never going to reveal anything about the time travel to her daughter? Especially when she herself got married?

The History - This book involves time travel. I thought how the time travel works was easy to follow, although the why it works was a lot more complicated, and I couldn't begin to explain it to you. Although the beginning of this story didn't grab me as much as I hope, I was much more invested once the traveling started. I love getting a first hand look at history. Going back to Eleanor of Aquitaine's period of time (mid 1100s), and learning more about her earlier reign was fascinating. One thing that stood out to me was finding out out what life was like for women - and for people who were Jewish and female, especially, at this time. Despite Eleanor's power as a ruler, women were pretty much owned by their father's or husbands at this time, and single women were basically at the mercy of any man they encountered. That was eye opening to me, and also made time traveling much more dangerous for Hope. Also, while reading this, I kept thinking about AC Gaughen's Scarlet series because we get to see Eleanor of Aquitaine at the later part of her life those books, where here we see her much younger, while she was having children.

I mostly saw the big revelations coming, and I though that the 'bad guy' was a little maniacally evil. I'd like more complexity there in the future. But overall, the historical aspects of this book were engaging, and my favorite part of the story.

The Romance - Hope's romance started too quickly for my tastes. I though that Hope trusted Bram way too too easily. Although I can get on board with instant attraction, I have a much harder time with instant trust. Especially for Hope in this situation. She's come from a very sheltered background, and is now in a new place with lots of mystery and secrecy. I wanted more hesitation and development between her and Bram, especially after the way they meet when she's out exploring near the Scottish estate. However, because Hope trusted Bram almost right away, I struggled to believe their connection. Although, it grew on me over the course of the book.

Thankfully, is absolutely no love triangle. There is another boy who has expressed some vague interest in Hope, although she doesn't reciprocate, and I'm hoping that they stay in the brother/sister realm of feelings. (I believe the author has said "no triangle" as well).

The End - Into the Dim ends with this story's mission complete, but also anticipating elements for a second book. I like when a story wraps its immediate plot, but also gives hints for what will happen in the future. So many books are going with cliffhangers these days, which is starting to stress me out!

In Conclusion - I enjoyed reading Into the Dim well enough, but the story definitely didn't suck me in as much as I'd hoped - and though the general idea of Scottish time travel is the same, it's a stretch to call this an Outlander read-alike. I had trouble with the set up of Hope's character - she honestly didn't stand out to me much beyond her trope - and I wanted a lot more out of the romance. My favorite part by far was seeing life in 12th century London. However, I read this book several months ago, and I'm afraid it isn't going to be super memorable in the end. Still, at this point, I'm interested enough to find out where these characters travel next, and to see if the characters and romance become stronger as the series progresses.

Love Triangle Factor: None
Cliffhanger Scale: Low - sets up for book 2, though this particular part of the plot felt finished.