City of Saints and Thieves by Natalie C. Anderson 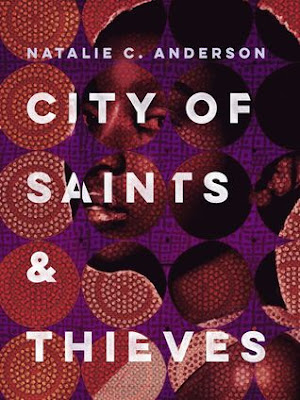 City of Saints and Thieves
By Natalie C. Anderson

Book Description: In the shadows of Sangui City, there lives a girl who doesn't exist. After fleeing the Congo as refugees, Tina and her mother arrived in Kenya looking for the chance to build a new life and home. Her mother quickly found work as a maid for a prominent family, headed by Roland Greyhill, one of the city’s most respected business leaders. But Tina soon learns that the Greyhill fortune was made from a life of corruption and crime. So when her mother is found shot to death in Mr. Greyhill's personal study, she knows exactly who’s behind it.With revenge always on her mind, Tina spends the next four years surviving on the streets alone, working as a master thief for the Goondas, Sangui City’s local gang. It’s a job for the Goondas that finally brings Tina back to the Greyhill estate, giving her the chance for vengeance she’s been waiting for. But as soon as she steps inside the lavish home, she’s overtaken by the pain of old wounds and the pull of past friendships, setting into motion a dangerous cascade of events that could, at any moment, cost Tina her life. But finally uncovering the incredible truth about who killed her mother—and why—keeps her holding on in this fast-paced nail-biting thriller.
__________________________________________________________________

From the first page of City of Saints and Thieves, I was taken with Tina: her life as a thief, the gritty descriptions of Sangui City, and her love for her sister. This girl is fierce. She has survived the past 5 years living on the streets as part of the Goondas gang, and every part of her is focused on her plan to take down the man who killed her mother.

Tina is good at what she does. She is quiet. She is careful. She is quick. She is determined. She gets in and out without being seen...until she breaks into the house of her mother's former employer, and is caught in the the same room where her mom was found dead. It is at this point in the book where I was HOOKED, and the story just got more and more addicting from here. City of Saints and Thieves is a mystery and a thriller, and the danger increases as Tina and Co. get closer to discovering the truth about her mother's death. Some of the revelations surprised me, some did not, but still the story was fast paced and exciting all the way through.

I'm not going to tell you who catches Tina, but this book has lots of interesting and complex characters - many I'd want to stay far, far away from. However, my favorites, besides Tina, are Boyboy and Michael. This story does have a sprinkling of romance. It is not the focus at all, and not necessary to the plot, but a nice compliment. It fits the story well in the way it's messy and a little complicated, but is also clear cut and makes perfect sense for the characters.

In many ways, Tina's mother is the catalyst for this story, and as it continues, Tina discovers a lot of truths about her mother and their past in the Congo. But it is Tina who is at the center of this tale, and as Tina finds out more about her own history, she is shaped into the person she wants to be in the future. This is a girl who has lived the past five years on her own, and the more internal revelations that she makes about the value of friendship and not having to be alone, affected me more than many of the overall plot revelations.
However, I think the most compelling element, and what set apart City of Saints and Thieves for me, is the setting. Especially when Tina travels back to the Congo - from where she and her mother escaped when she was a young child. Although this story is fiction, the Congo is a real place and so is the turmoil its people have faced for hundreds of years (look up King Leopold's role there for a start). This country has been - is being - torn apart by war and violence, but beauty still abounds, and the author depicts the contrasts in the extreme darkness and light - as well as the grey areas in the middle - in a powerful and thought provoking way.
Highly recommended. Love Triangle Factor: noneCliffhanger Scale: Standalone, as far as I know. (Threads could open for a sequel, but this ending is strong if it stays)
Posted by Lauren @ Love is not a triangle at 12:00 AM