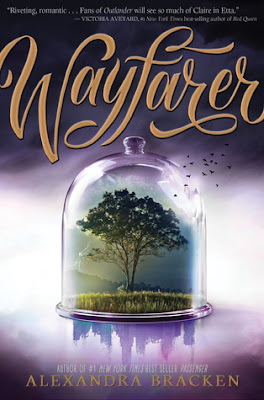 Book Description: All Etta Spencer wanted was to make her violin debut when she was thrust into a treacherous world where the struggle for power could alter history. After losing the one thing that would have allowed her to protect the Timeline, and the one person worth fighting for, Etta awakens alone in an unknown place and time, exposed to the threat of the two groups who would rather see her dead than succeed. When help arrives, it comes from the last person Etta ever expected—Julian Ironwood, the Grand Master’s heir who has long been presumed dead, and whose dangerous alliance with a man from Etta’s past could put them both at risk.

Meanwhile, Nicholas and Sophia are racing through time in order to locate Etta and the missing astrolabe with Ironwood travelers hot on their trail. They cross paths with a mercenary-for-hire, a cheeky girl named Li Min who quickly develops a flirtation with Sophia. But as the three of them attempt to evade their pursuers, Nicholas soon realizes that one of his companions may have ulterior motives.

Wayfarer is the sequel to Passenger, and it is a well-written and worthy conclusion to a gripping time travel duet. See my thoughts on the first book, Passenger, HERE, and don't miss this series!

I read Passenger over a year ago, and though the whole series is told in dual perspective, it is Etta's narrative that I remember most from the first installment. Her entire life changed in an instant when she discovered she was a traveler. I mean, imagine standing in contemporary NYC one moment and then all of a sudden waking up and you're on a ship in the middle of an ocean at the end of 18th century? I'd be more than a little freaked out! I was swept along with Etta's emotions through the entire journey, and just amazed at how well she worked to adapt and keep going forward. However, Nicholas - the pirate privateer Etta meets on said ship - and his POV were very much present, and goodness, I love him too, but it was Etta's voice that spoke to me the most in the first book.

However, the exact opposite was true for me in Wayfarer. This story fully belongs to Nicholas. It is his journey - emotional and physical - that has affected me the strongest, and it's the one I'll remember the clearest in the future. Nicholas goes through a lot in this book, as he and companions make increasingly dangerous choices that have rather destructive consequences. Etta faces much as well, and I don't want to discount her experience in this sequel either, but it is Nick who spoke to me the most - and for whom I ached - as I read this story. His strong sense of honor is one of his defining characteristics, and I was on the edge of my seat as it is repeatedly tested against his life and those he cares about. Nothing in this story is easy for Nicholas, but I love him all the more for how he handles himself through it all. I know I wouldn't have held it together, or been nearly as clear thinking as he is.

As a lover of history, I love time travel books, because I can relate to the idea of watching characters go back in time and try to blend in while navigating a foreign place that has completely different rules. I don't think I'd do half as well as these characters do. Both Etta and Nicholas crisscross the world through time in Wayfarer as they work to make their way back to each other and find the astrolabe before Ironwood gets his hands on it. However as they go, they realize 1) that they're fighting against something much bigger than they ever thought, and 2) their journey back to each other is increasingly less clear or certain as it becomes more dangerous and complicated. I love that the stakes are even higher in this book, and the world is even more complex than it was before.

Of course Wayfarer has other characters in it besides Nicholas and Etta, as each spends time traveling with different companions. Sophie was not my favorite person in the first book, but she grows on me throughout this story, as she travels with Nick. She also gets her own romance with Lin Min, whom I wasn't sure about through most of Wayfarer. But they are definitely well matched and I can understand that they were drawn to each other. Etta, on the other hand, gets to know Henry Hemlock and Julian Ironwood better. I really liked seeing Etta's relationship with the former, while the latter character managed to be both infuriating and endearing. I enjoyed seeing the ways Julian grew up and changed through the story, and I love that Etta won't put up with his nonsense. Although it's partly the point, I never felt like I was able to pin down Rose in this story, and in the end, I wish we could have seen more of a conversation between her and Etta.
My only complaint is that Etta and Nicholas spend the majority of the novel apart. However, though the promise of a happy and long lasting reunion grows increasingly more dim as the stakes get higher, they are always dedicated to and thinking about each other. Although new characters and old return, there is absolutely no waffling or petty drama about their feelings for each other, or their understanding that they are the best partners for each other. Even when others try to deceive or misdirect them, they trust in each other. They want to find each other again, but both have big roads and world changing choices ahead of him. As I said, nothing is certain, but I'll say that I ended this book very satisfied.

I definitely recommend this duet. Don't miss Wayfarer if you haven't yet read Passenger, and if you've yet to read either, this is the perfect time to experience the entire series together.
Love Triangle Factor: None
Cliffhanger Scale: Series conclusion
Posted by Lauren @ Love is not a triangle at 12:00 AM