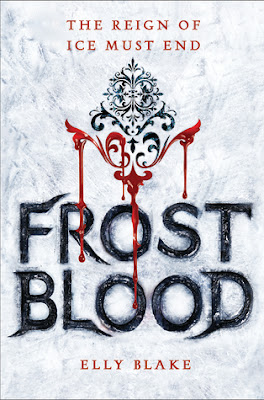 Book Description: Seventeen-year-old Ruby is a fireblood who must hide her powers of heat and flame from the cruel frostblood ruling class that wants to destroy all that are left of her kind. So when her mother is killed for protecting her and rebel frostbloods demand her help to kill their rampaging king, she agrees. But Ruby's powers are unpredictable, and she's not sure she's willing to let the rebels and an infuriating (yet irresistible) young man called Arcus use her as their weapon.All she wants is revenge, but before they can take action, Ruby is captured and forced to take part in the king's tournaments that pit fireblood prisoners against frostblood champions. Now she has only one chance to destroy the maniacal ruler who has taken everything from her and from the icy young man she has come to love.Fast-paced and compelling, Frostblood is the first in a page-turning new young adult three-book series about a world where flame and ice are mortal enemies—but together create a power that could change everything.
________________________________________________________________________

Frostblood is a fairly typical "MC doesn't know yet, but she has great and unique powers that will save the world, if only she can control them (spoiler alert: she figures it out at the right moment!)" BUT still I liked this book as a whole, and I don't mind this storyline set-up. What I loved - I loved the Fire vs Frostblood gifts and the way the character traits of each person matches their abilities. Ruby, our MC and a Fireblood, is much more prone to a fiery temper and not afraid to express her emotions. She needs to learn focus and control. Arcus, her love interest and a Frostblood, freezes his emotions under layers of ice, and it takes work to know know what he's feeling sometimes. I loved the contrast and tension between these two, and especially their banter. Their dialogue was delicious and snappy and just so so good. I could have read a whole book of their interactions. Questions I have - This world has a fairly complex mythology of gods and goddesses fighting and granting different gifts to humans that has led to later chaos. I wish there was a glossary of who each of them is, though, because I felt a bit lost about it all. I also still have many questions about the world building. I'm not at all sure how Ruby got her abilities - maybe it's not hereditary? It doesn't seem to have come from her mother, but not once was any father mentioned. Did he die? Was he a one night stand? It was a strange omission to me that Ruby never thinks about that figure at all. Also, (Spoiler: Why is Ruby the child of darkness? I was a little confused about what that meant and how that happened.) I'm hoping a lot of this is answered as the story goes forward. I think Ruby has a lot more to discover about herself and her history. I'd also love to see a map of this land, as a bunch of different places were mentioned, and I'd like to visualize all the different surrounding kingdoms and where the Fire vs Frostbloods came from. What I didn't love - It's hard to talk about this without mentioning spoilers, but I didn't love how all of the conflict plays out in the second half of the book. I LOVED the story in the first half, and the action was strong and kept me reading in the second half, but some of the direction it took wasn't my favorite. Though, take that with a grain of salt because I know there are certain things that bother me, that most people will not bat an eye at. I'll talk more about it under a spoiler tag: I know it's not a true love triangle, but the way Ruby is almost seduced by King Rasmus while she's being courted by the darkness, creeped me out, and made me really uncomfortable. Although she's being taken over by the power of a corrupted darkness that's pulling at her, this is never a storyline that I like. That said, things are sorted in a way that I don't fear any sort of triangle coming from this direction in the future, so that's good.Anyway, I liked this book as a whole, and I see where it's getting a lot of buzz. I just hope that as the story goes forward, the author won't throw in any unnecessary love triangles, especially because my favorite part is Ruby + Arcus.

Love Triangle Factor: Essentially none, but see the second spoiler above for more information. I think I need a new category called, "It's not really a love triangle."
Cliffhanger Scale: Low. Part of a series. Not sure how many books, but this one wraps itself well.
Posted by Lauren @ Love is not a triangle at 12:00 AM