Daughter of the Pirate King by Tricia Levenseller 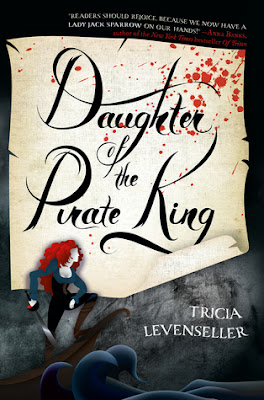 Daughter of the Pirate King
by Tricia Levenseller

It's always exciting when a book lives up to its hype - and this one does for sure! I didn't want to stop reading, and now I'm desperate for the next installment. Daughter of the Pirate King is fast paced and thrilling from start to finish. It is also a lot more intense than I imaged. This is a brutal world and Alosa and the other pirates she encounters are not playing around. The pirate life is gritty and in many cases it is kill or be killed. Thankfully, Alosa is up for the challenge. She's not afraid to make difficult choices to complete her mission and survive.

The strength of this book is the characters, especially, Alosa: Pirate Princess and all around badass. This girl does not need any help, thank you very much. She is capable and strong and gets things done. I loved her from start to finish. I also love that despite her tough exterior, and willingness to do anything to survive and succeed, she is fair, cares for her crew and isn't needlessly ruthless. Although she doesn't need anyone to rescue her, she also realizes that she's not an island to herself, and I loved seeing moments where she works with others. Of course those moments are few and far between when she's stuck on an enemy pirate ship.

My second favorite character is Riden: first mate on the pirate ship Alosa infiltrates on a secret mission for her father. I enjoyed getting to know him better as the story continues. I found his relationship with his brother Draxen, captain of the ship, to be interesting and well written in its complexity. But the best relationship in this book is the one Riden develops with Alosa. Their snappy banter and incredible tension is off the charts. They begin as enemies and are constantly trying to get an angle on each other, but almost immediately, it's very clear how great a match they are for each other - in wits and everything else. And slowly, the working against each other changes flavor to one of support and even more than that. AKA swoons abound. Riden is an observer and he doesn't miss Alosa's attempts at deception, but he also sees her strengths, and respects her for them. He is not threatened by how capable she is. I wish there were more heroes like him.

I'm not sure exactly the scope of this fantasy world, and I would love a map to appear in the finished copy. Alosa's home features a lot of ocean and some islands as well as a pirate king and a land ruler (not seen but briefly mentioned). There's also magic, which was a lot of fun to discover. But this story is mostly spent on a ship so I didn't get a clear picture of what this world looks like.

Daughter of the Pirate King is definitely part of a series (I think it's a duet). The book doesn't end on a cliffy, but it does stop in the middle of the story. This part of the tale is finished, and I can't wait to find out what happens next. Highly recommended.

Love Triangle Factor: None
Cliffhanger Scale: Low/Medium. Ends in the middle of the story but not at a stressful point.
Posted by Lauren @ Love is not a triangle at 12:00 AM