Mighty Jack and the Goblin King by Ben Hatke


Last year I was part of the blog tour for Mighty Jack, and today I'm excited to be featuring the second book in this series, Mighty Jack and the Goblin King. 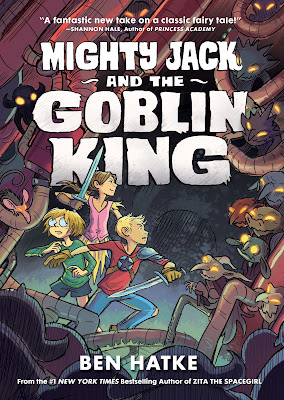 Mighty Jack and the Goblin King
by Ben Hatke

Book Description: The garden behind Jack’s house has gone wild with creatures set loose by the magic beans Jack and his kid sister Maddy planted. One particularly mean creature has kidnapped Maddy and carried her off. Now Jack and his neighbor Lilly must follow her to a world between worlds beyond the vines and stalks, where giants grind the bones of human children to feed their beast in the castle up above, and a fearsome goblin king rules down below. It'll take more than Lilly’s bag of concoctions and tricks, and more than one hero, to rescue Maddy, reunite Jack's family, and bring them all safely home again.

My now 6 year old son and I read Mighty Jack together last year and he could not wait for the sequel to come out. Once again he claimed this book as soon as we received it.

Where Mighty Jack begins this series' retelling of Jack and the Beanstalk by incorporating magic and adventure - and a wildly growing garden - into the modern world, Mighty Jack and the Goblin King takes the story into the world of giants, goblins and other surprising creatures. At the end of the last installment, Jack's sister Maddie was stolen by a terrible giant. Determined to rescue her at all cost, Jack and his neighbor Lilly, too, trek into another world to find her.

While the first book in this series focused more on the discovery of the beans and what grew from them, this one starts right away with action. Overall, it had a more intense tone of danger to it that felt a little darker than the last one. This is a Middle Grade series and the characters are in upper middle school (or even entering high school). For that, the book was a little above my 6 year old, and he definitely noticed the greater intensity to the story. But I highly recommend this series for kids that are a few years older than him (maybe 8+), and older Middle Grade readers will get some of the more subtle deeper themes.

The artwork in this story continues to be bright, imaginative and descriptive. It is easy to read without most of the words. And though the book is titled after Jack, I love how much this story features Lilly and Maddie as well. I definitely felt the girl power in this retelling. Jack and Lilly have their own paths in this story, and I enjoyed how their stories diverged and then converged, as well as how protective they both are of Maddie.

Mighty Jack and the Goblin King wraps up its story well, while also ending on a bit of a reveal that leaves things open for more books in this series. Thankfully it's not another cliffhanger in the "oh no!" sense, but more of the "I can't wait for what's next!" sense.

Love Triangle Factor: None (only a tiny hint of any romance)
Cliffhanger Scale: Low. This story completes itself, but epilogue sets up another story to come.

Ben Hatke is the author and illustrator of the New York Times–bestselling Zita the Spacegirl trilogy, the picture books Julia's House for Lost Creatures and Nobody Likes a Goblin, and the graphic novels Little Robot and Mighty Jack. He lives and works in the Shenandoah Valley with his wife and their boisterous pack of daughters.

Watch a video of Ben Hatke talking about living creatively. 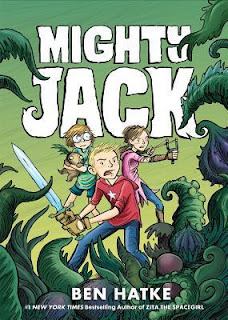 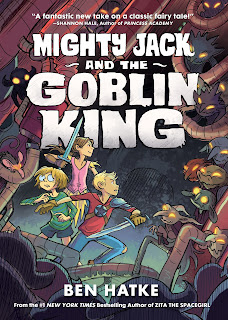