Daughter of the Siren Queen by Tricia Levenseller 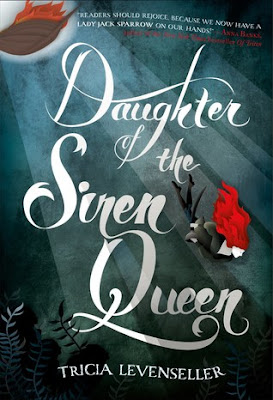 Daughter of the Siren Queen
by Tricia Levenseller

Book Description: Alosa's mission is finally complete. Not only has she recovered all three pieces of the map to a legendary hidden treasure, but the pirates who originally took her captive are now prisoners on her ship. Still unfairly attractive and unexpectedly loyal, first mate Riden is a constant distraction, but now he's under her orders. And she takes great comfort in knowing that the villainous Vordan will soon be facing her father's justice.
When Vordan exposes a secret her father has kept for years, Alosa and her crew find themselves in a deadly race with the feared Pirate King. Despite the danger, Alosa knows they will recover the treasure first . . . after all, she is the daughter of the Siren Queen.
_________________________________________________________________

NOTE: This is the second book in a series. See my thoughts on Daughter of the Pirate King.

What an excellent end to a thrilling duet! I think I may have even liked it more than the first, which is rare for me these days. Everything I loved about Daughter of the Pirate King was even more intense and exciting in Daughter of the Siren Queen.

This time, instead of infiltrating another crew, Alosa is back on her own ship of incredible lady pirates. Right from the first page we get to see them in action. I enjoyed getting to know Alosa's crew better and seeing Alosa back in charge as captain. Alosa also faces some new revelations in this book, both discovering more about her mother's siren nature and finding out what it's like to be on the opposite side as her father. Neither of these revelations is easy for Alosa, but it was rewarding to watch her continue to grow and become even more comfortable with herself as she fought though them.

All this is happening while Alosa is in a race with the Pirate King to follow the map pieces to the siren's hidden treasure. Danger, death and enchantments are lurking everywhere, and not everyone will make it out alive, but Alosa is a great leader and friend and will do anything to succeed. Joining Alosa's crew is Riden, former first mate of the ship Alosa infiltrated in the last book. The tension continues to crackle off of these two. One of my favorite parts of this book was the continued building romance between them. I couldn't get enough of every interaction between them.

This duet comes highly recommended from me! I can't wait to find out what Tricia Levenseller writes next!
Love Triangle Factor: NoneCliffhanger Scale: 2/2 End of duet