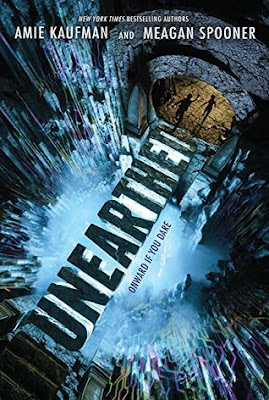 Book Description: When Earth intercepts a message from a long-extinct alien race, it seems like the solution the planet has been waiting for. The Undying's advanced technology has the potential to undo environmental damage and turn lives around, and Gaia, their former home planet, is a treasure trove waiting to be uncovered.

For Jules Addison and his fellow scholars, the discovery of an alien culture offers unprecedented opportunity for study... as long as scavengers like Amelia Radcliffe don't loot everything first. Mia and Jules' different reasons for smuggling themselves onto Gaia put them immediately at odds, but after escaping a dangerous confrontation with other scavvers, they form a fragile alliance.

After loving Kaufman and Spooner's Starbound trilogy, I was so excited to hear they were collaborating again for a new series. These two rock the YA Sci-fi genre and Unearthed is a great addition to that and so much fun!

Although there's never a dull moment for Mia and Jules and exciting, or rather dangerous, things start happening right away in the story, it wasn’t until they reach the temple they're set to explore that I got hooked. That's also when my Indiana Jones loving heart got all the feels. I absolutely adore the Indiana Jones in space vibe to this story, even with the alien a la CRYSTAL SKULL angle. If this was what was made of that movie, I would have been all over it. But I digress.

In Unearthed, Mia and Jules meet after they’ve both landed on the uninhabited planet Gaia, led by messages from a long-dead alien race. They are there for very different reasons. Jules wants to explore the planet for historic and academic reasons, Mia is there to scavenge treasure. They clash immediately but they also both realize the benefit of having the other around and team up, albeit tentatively and with lots of secrets and mistrust between them.

I loved watching Mia and Jules learn how to work together and trust each other. And the romance that blooms from that made me so happy. Of course so much is going on at the same time and these two barely have a moment to breathe, let alone make out.. They’re trying to survive an uninhabited planet, follow the clues and avoid the traps in the alien temple they’re exploring (Think LAST CRUSADE) and outrun all the people trying to get to the end first. Then as is standard for Spooner and Kaufman, some wild and surprising things happen near the end that change everything. How do they do it, I don't know, but they never fail to leave me with my mouth gaping.

Instead of standalone companions, this appears to be a true series and it ends on quite the cliffhanger. I can’t wait to find out what happens next!
Love Triangle Factor: None Cliffhanger Scale: High 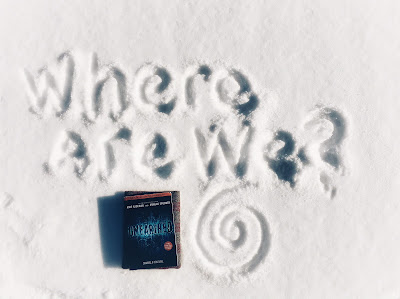 Here's my photo inspiration for Unearthed
Can you guess where I was in the book when I took this?
Find these and other pictures on my bookish Instagram

PS. I kept trying to connect this to the world of the Starbound trilogy and didn't quite manage to make that happen. There was one thing that made me pause, but I don't think this is the same universe as that. So no Lila or Tarver pop up, sadly. Though I can't wait for more of these new characters.
Posted by Lauren @ Love is not a triangle at 12:01 PM