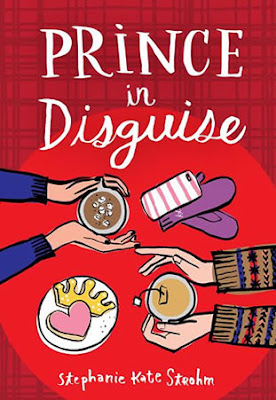 Book Description: Someday I want to live in a place where I never hear “You’re Dusty’s sister?” ever again.
Life is real enough for Dylan—especially as the ordinary younger sister of Dusty, former Miss Mississippi and the most perfect, popular girl in Tupelo. But when Dusty wins the hand of the handsome Scottish laird-to-be Ronan on the TRC television network’s crown jewel, Prince in Disguise, Dylan has to face a different kind of reality: reality TV.

This was completely utterly adorable! Our heroine Dylan attends a wedding at a Scottish castle and gets her own cute romance with a boy in the wedding party, who has a delicious English accent and is in fact a prince, though she doesn’t know it. Throw in secret passages and a camera crew filming the entire experience and hilarity is sure to ensue and does frequently. I love how awkward and sweet Dylan and Jamie’s romance is. And that it’s clear they like each other being entirely themselves. I was also pleasantly surprised that their romance is such a central focus of this book. While the side cast seems very one dimensional at first, I enjoyed watching several of them become more fleshed out as the story went on. Especially Dylan’s sister Dusty, as well as their mom.

For anyone who has dreamed of marrying a prince, loves an adorkably good romance, secret identities and lots of hilarious, awkward situations, this is for you!

1) Based on the cover, I thought this book was MG or very young YA and put off reading this for a while because of that. While the story is light and appropriate for upper MG, the cover is a little misleading. I think this book could have a broader appeal if it was repackaged with a different cover. (And the bonus content I mention below LOL)

2) I really wanted to see what happened when Dylan actually watched the TV show she unwittingly became part of. That must have been hilarious. I wanted a later scene showing that!

3) My biggest wish and only real complaint about this story deals with the end. I'm desperate for an epilogue of Dylan and Jamie in the future! Although the end is more realistic and does have some hope, my romantic heart wanted something more concrete for their future. Despite all the obstacles, these two were made for each other!
Love Triangle Factor: None Cliffhanger Scale: Stand-alone
Posted by Lauren @ Love is not a triangle at 12:00 AM