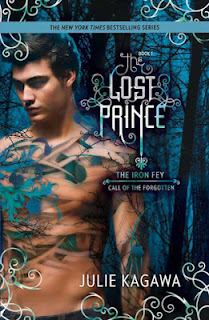 Don’t look at Them. Never let Them know you can see Them.That is Ethan Chase’s unbreakable rule. Until the fey he avoids at all costs—including his reputation—begin to disappear, and Ethan is attacked. Now he must change the rules to protect his family. To save a girl he never thought he’d dare to fall for.

Ethan thought he had protected himself from his older sister’s world—the land of Faery. His previous time in the Iron Realm left him with nothing but fear and disgust for the world Meghan Chase has made her home, a land of myth and talking cats, of magic and seductive enemies. But when destiny comes for Ethan, there is no escape from a danger long, long forgotten. (From Goodreads)

A note about the series:

The Lost Prince is the second cycle of Julie Kagawa’s Iron Fey series, which started with The Iron King. Although you could read this book without having read the four books in the first series, I think this story will be more meaningful if those books were read first. The beginning of Meghan’s journey is also the beginning of Ethan’s.

I am always hesitant to make a pronouncement like that, because it means there are a lot of books to read before getting to the current one. But the Iron Fey is an excellent series and it has the added benefit of being complete. If you are interested in this book, I’d encourage you to start first with Meghan, Puck and Ash in The Iron King.

My review will contain some SPOILERS for the Iron Fey series. You've been warned.

Ethan was left behind but the fey haven't forgotten who he is.
The Lost Prince is the story of the people - or more specifically the person - left behind when Meghan Chase chose to stay in the Nevernever to become the Iron Queen. Meghan's journey into Faery began with the kidnapping of her little brother Ethan. It's now 12 years after Ethan was rescued, and while his sister is living in the Iron Realm, Ethan is back in the human world. But his life is anything but normal.

Ethan has always been able to see the faeries that live around him. But he learned long ago that behind their colorful exterior lies an acute danger. Because when you can see Them, they also pay attention to you. To protect himself and those around him, Ethan avoids making friends with anyones, takes a martial art called Kali, and is an expert on wards that keep faeries away. But still they taunt him, and he is constantly in trouble because of their games.

Everything changes when something happens to a half faery boy that Ethan knows. Suddenly he is forced to stop running from the fey and face them head on, whether he wants to or not.

Once again Julie Kagawa creates a richly imagined world.
One reason that I loved the Iron Fey series so much is because Julie Kagawa did an amazing job of building the faery mythology and world. If faeries are a product of human imaginations, then the rise of the Iron fey in a technology obsessed world made perfect sense to me. In The Lost Prince, the conflict comes from another type of fey, and the new storyline is just as well thought out. Also, the Nevernever Ms. Kagawa created in the first series was lush and richly described, and she did not disappoint with her descriptions in The Lost Prince. I especially loved the the Iron Kingdom, which has a Victorian steampunk vibe that made me want to take a trip there myself.

Some beloved characters return.
A favorite aspect of companion books/series is that they give readers the opportunity to view beloved characters from a different angle. I enjoyed being back in the Nevernever, but seeing everything from Ethan's perspective. We also get to see some old friends again, and I loved the outside perspective on them. I was actually pleasantly surprised at how many characters came back for a visit.

Ethan makes friends - and enemies.
The Lost Prince also introduces us to some new faces, most notably Makenzie St. James, called Kenzie, a girl in Ethan's class who is determined to break down his tough exterior. I  think she is great for Ethan (although her nickname for him got a little annoying), but I didn't find myself connecting to her very well. I'm hoping this will change in future books. We also meet Kierran, who is my favorite addition to the storyline. Kenzie and Kierran are both much lighter contrasts to Ethan's brooding nature. I see a great friendship developing between Kierran and Ethan.

As is the way of the faery world, there are always menacing creatures looking for an opportunity to strike. A new threat is on the rise, and it is affecting the local fey. But you'll have to read the story to find out who - or what - I'm talking about.

Ethan does a lot of brooding.
I really like that The Lost Prince explores "what happens after." Meghan has her happy ending, but that doesn't mean that everyone else does as well. In light of what Ethan has been through - and is still facing - I very much understood Ethan's mindset. He is lonely and angry and bitter. However, I did get a little tired of his brooding.

Also, Because Ethan has no friends and shuns everyone - he's afraid of them getting hurt because of him - a lot of the first quarter of the book is Ethan's inner monologue or conversations where he's trying to push everyone away. Unfortunately, it read a bit tedious for me.

Ethan grows up.
Thankfully the second half of the book really picks up. Ethan also grows a lot throughout this story, and I think it was a necessary journey for him, although it was a bit tiring at times. I foresee the next books moving much more quickly.

Rating: 3.5 stars - Despite a slow start and some excessive brooding, a overall promising beginning to the series. I am hopeful for the future books.

*I received this book from NetGallery in exchange for an honest review.
Posted by Lauren @ Love is not a triangle at 12:00 AM