A resonant debut novel about retreating from the world after losing everything—and the connections that force you to rejoin it.Since the night of the crash, Wren Wells has been running away. Though she lived through the accident that killed her boyfriend Patrick, the girl she used to be didn’t survive. Instead of heading off to college as planned, Wren retreats to her father’s studio in the far-north woods of Maine. Somewhere she can be alone.Then she meets Cal Owen. Dealing with his own troubles, Cal’s hiding out too. When the chemistry between them threatens to pull Wren from her hard-won isolation, Wren has to choose: risk opening her broken heart to the world again, or join the ghosts who haunt her. (From Goodreads)

I had things I didn’t want and then I lost them.

After surviving a car crash that killed her boyfriend, high school graduate Mamie Wells (nicknamed Wren) escapes from her life in New York City and all of its expectations to her sculptor father’s house in eastern Maine. There she retreats inside herself in an effort to handle the suffocating grief, depression and survivor’s guilt that is crushing her. Just being alive and making it through a day is an accomplishment for her.

Biking along the wooded roads one day, Wren meets Cal Owen after his car nearly runs her over. Cal has his own set of problems, and he and Wren are a terrible match in every respect. But in many ways they wake each other up, and slowly, together they make each other’s lives better. Their relationship is awkward, messy and both of them make mistakes.  But the fact that they are two broken people with insurmountable issues between them is also what makes them exactly right for each other. While it took me some time to really understand Wren, I adored Cal from the beginning.

I came here because it’s pine-dark and the ocean is wild. The kind of quiet-noise you need when there’s too much going on in your head. Like the water and the woods are doing all the feeling, and I can hang out, quiet as a headstone, in a between place. A blank I can bear.

Lovely, Dark and Deep could not have been told without its beautiful prose or the coastal winter setting. The trees and the cliffs and the sea. The cold and the heavy snow. The rural isolation of Maine in the winter. The place of the story is a solid element in this book. A mood I could sense, describing the weight of Wren’s depression in a tangible way. I can't say enough things about how amazing and visceral is the setting of this story. Reading Lovely, Dark and Deep in a snow storm just added to my connection to this moody book.

The thing about grief is that you have to let yourself feel it.

Everyone grieves differently, and there will always be people who don’t understand yours. At first I felt that way about Wren. Although I was sad for her, I couldn't grasp why she wasn’t able to move on from the accident, especially if everyone else was trying to. But the more I watched her, and the more I learned, the greater sympathy I had for this girl lost in in a sea of her own pain. It wasn’t just the car crash that killed her boyfriend that was crushing Wren, many things were pulling her under. I think Amy McNamara did an excellent job describing Wren's debilitating emotions, and how they skewed her perspective of the world and the people around her.

This story takes place in the year after Wren has graduated from high school. Tangled in Wren's depression and grief about the accident, are parental expectations and pressure about her future. Wren's understanding about who she is and what she wants for her life vastly differ from her mothers' beliefs, and that creates even more tension within Wren. Although I wish Wren had found more resolution with her mother, I am hopeful that it will come. I also love the new closeness Wren gains with her father, and the reluctant but solid connections she makes with others that she meets in the small Maine town. I think that finding new friends and moving on from old ones, is a part of growing up. Though the experience is stark and painful to watch happen in Wren's life, I also felt like it was realistic of that transition period between high school and life.

Lovely, Dark and Deep is an introverted book about one person trying to learn to breathe again – moment by moment – after a tragedy. It doesn’t wrap itself up neatly, and in the end many things are still uncertain. Wren's life is a mess and bridges are still burned, but I still felt hopeful for her in the end. I believe that Wren will be okay again, and that is not something that I could have said at the start of the book. She won’t ever be the same as before. But there is no way to go back anyway, so wishing for that is foolish. The beautiful conundrum of this story is that in the after, Wren and Cal both find something in each other that they wouldn’t want to erase either.

Maybe this is what it’s supposed to feel like, love, steady in the face of things. 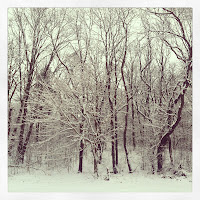 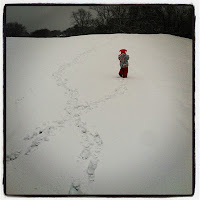 If I were going to do a Six Degrees of Separation between Lovely, Dark and Deep and past contemporaries I've read, I'd pair it with -

Small Damages by Beth Kephart because both books feature beautiful, lyrical language, and stories that feel organic to their settings, as well as heroines who have to create a new path for themselves after something happens in their lives to drastically alter the old one.

Raw Blue by Kirsty Eager because both Wren and Carly are trying desperately to stay afloat after a tragic experience. They are two girls who will never be the same. But in going forward both girls create new lives, including relationships that would not have come before. They also find peace and solace in the outdoors: Wren has a compulsion to run, Carly feels the same about surfing. They feel as if their lives are manageable if they can just do that one thing.

Just One Day by Gayle Forman because both books take place in the transition period after high school and feature heroines who must face the fact that their mothers' expectations for their lives differ from their own. Both Wren and Allyson also face the painful reality of growing apart from childhood friends, and the realization that one event can change everything that comes after. 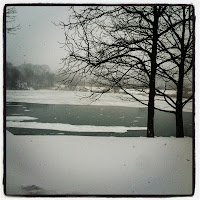 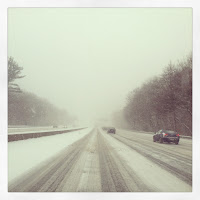 *I took these four photographs this winter with instagram.
Posted by Lauren @ Love is not a triangle at 12:00 AM