NOTE: Everbound is book 2 in a series, my thoughts below may contain spoilers for Everneath. 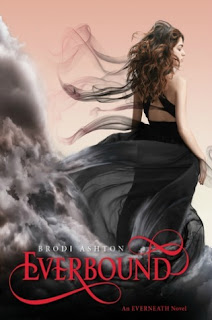 Nikki Beckett could only watch as her boyfriend, Jack, sacrificed himself to save her, taking her place in the Tunnels of the Everneath for eternity — a debt that should’ve been hers. She’s living a borrowed life, and she doesn’t know what to do with the guilt. And every night Jack appears in her dreams, lost and confused and wasting away.Desperate for answers, Nikki turns to Cole, the immortal bad boy who wants to make her his queen — and the one person least likely to help. But his heart has been touched by everything about Nikki, and he agrees to assist her in the only way he can: by taking her to the Everneath himself.Nikki and Cole descend into the Everneath, only to discover that their journey will be more difficult than they’d anticipated — and more deadly. But Nikki vows to stop at nothing to save Jack — even if it means making an incredible sacrifice of her own.In this enthralling sequel to Everneath, Brodi Ashton tests the bonds of destiny and explores the lengths we’ll go to for the ones we love. (From Goodreads)

Nikki is determined to get Jack back.
It has been two months since Jack took Nikki's place in the Tunnels, and she will do anything to rescue him. Nikki knows that Jack is still alive, because she sees him in her dreams. But Jack is remembering less and less when he visits her, and Nikki knows that soon he will forget her entirely. When that happens, he will die. You see, Nikki is Jack's Tether, or his tie to the Surface. She anchors him to life. He did the same for her when she was in the Feed with Cole. It's why she survived 100 years in the Everneath being drained of energy. But time is running out for Jack, and Nikki is desperate to save him. Although she resents and distrusts Cole, she knows he's her only hope of getting Jack back.

Nikki has regained her strength.
When Everbound begins, Nikki is remarkably different from the wasted girl we met in Everneath. Although she is wracked by guilt that her decision to go the Feed with Cole led to Jack taking her place in the Tunnels, she is focused and determined to rescue Jack at any cost. Nikki does have some moments when her emotions overwhelm her, but who wouldn't in her place? What I really admire about Nikki is that she regrets that her previous decisions hurt a lot of people, but she is still unapologetic about the fact that Jack is her number one priority.

Nikki's personal life is a mess.
Nikki's previous disappearance and now Jack's sudden status as missing, is continuing to affect her personal life. I'm glad that the author didn't erase those problems for Nikki. Her father still doesn't know where Nikki was for six months, and is starting to worry about the state of her sanity, especially now that she is completely obsessed with underworld mythology. Nikki has to go to therapy, where of course she can't open up about anything. Jack's mother is frantic to find her son and has hired a detective to interrogate Nikki, who was the last person to see him. And Nikki's friend Jules is rightfully suspicious and angry at Nikki for not admitting that she knows where Jack is. The only person that Nikki really has on her side is Will, who has miraculously remained sober since Jack has been gone. While this is all going on, Nikki (with the help of Will) is secretly trying to figure out how she can rescue Jack.

Isn't it ironic that the only way Nikki can save Jack is with Cole's help.
Nikki needs Cole to get her back to the Everneath, only she has to find him first. And beg him to help her. After a great deal of pleading and coercion, he reluctantly agrees. I will admit to sympathizing with Cole at several points throughout Everbound. Brodi Ashton did an excellent job at getting us see how Nikki's choices - her love for Jack, her decision to go to the Feed, her determination to search for Jack - have affected the people around her, most especially Cole.

I'm not saying that Cole is blameless. He has an unhealthy obsession with Nikki, and definitely coerced encouraged her into agreeing to the Feed. But I definitely saw Cole a little differently when I was reading Everbound. Where before in Everneath, Cole's feelings for Nikki seemed mostly tied up in his obsession to overtake the Queen, they came across as more genuine in Everbound. As much as Nikki is focused on getting to Jack, she would have never made it into the Everneath, let alone survived a single moment there without Cole's help.

Ashton's underworld mythology is vibrant.
One thing I most love about this series is Ashton's mythology, and the fact that the features of the Everneath have been taken from other myths throughout history - Greek, Egyptian mythology and even Dante's Inferno are referenced. Nikki spends a lot of time in the Everneath in this book, and I absolutely loved exploring it. The Everneath is a dangerous place, especially for a human, both because of the creatures that inhabit it, and in the way the physical place plays with the mind and emotions. Where I could see a lot of Persephone and even Eurydice's tales in Everneath, myths of the labyrinth and minotaur are specifically explored in Everbound. I was completely fascinated by the way that Ashton created her own spin on those classic stories.

Nikki and Jack are each others' Tether.
Nikki's connection to Jack guides her through the deadly maze that is the Everneath. There are also times that their connection helps keep Nikki, Cole and their other companions alive. Although Jack is not physically present for most...or all (I won't spoil what happens) of the book, I still felt very connected to him through Nikki's memories. Even though Nikki and Jack have been apart for so much of the series, their devotion to each other is a tangible presence on every page. I think their feelings of longing, and overwhelming need to save each other at great personal risk to themselves, speaks to the power of their relationship. However, I will admit to being anxious for Jack and Nikki to make some new memories together, instead of relying on flashbacks. I won't tell you whether that happens in this book, except to say that I have hope for them.

Is this a love triangle?

Thankfully, from Nikki's perspective this book has no love triangle. Although she is tied to, and comes to care for, both Cole and Jack, it is always clear that she is in love with Jack. Even though Nikki relies greatly on Cole to get Jack back, she is always honest about her feelings for him. There is no waffling, and I greatly appreciated that about her.

Although Nikki doesn't always make the best decisions, and her single minded focus puts other people at risk at times, she is up front about it. While there were moments that I felt bad for anyone in her way, including Cole, I also admired Nikki's devotion to Jack and commitment to save him. As to whether other characters believe they have a chance with Nikki in the future, or how likely she is to change her mind at any point...I will leave that up to the reader to decide.

I was completely shocked by the end.
The ending of Everbound completely floored me. I felt shocked, angry and desperate for the final installment in this series. It was brilliant in the most frustrating way possible. Please read this book NOW so that we can talk about it!

Love Triangle Factor: Mild - Nikki's feelings are always clear.
Cliffhanger Scale: MEDIUM - No immediate danger. Even so, this end felt HIGH to me. I am ready to jump into action, and desperate to know what is next!