Out of the Easy 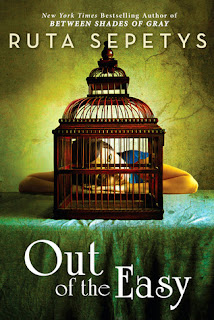 It’s 1950, and as the French Quarter of New Orleans simmers with secrets, seventeen-year-old Josie Moraine is silently stirring a pot of her own. Known among locals as the daughter of a brothel prostitute, Josie wants more out of life than the Big Easy has to offer. She devises a plan get out, but a mysterious death in the Quarter leaves Josie tangled in an investigation that will challenge her allegiance to her mother, her conscience, and Willie Woodley, the brusque madam on Conti Street.Josie is caught between the dream of an elite college and a clandestine underworld. New Orleans lures her in her quest for truth, dangling temptation at every turn, and escalating to the ultimate test.With characters as captivating as those in her internationally bestselling novel Between Shades of Gray, Ruta Sepetys skillfully creates a rich story of secrets, lies, and the haunting reminder that decisions can shape our destiny. (From Goodreads)

Josie Moraine is the seventeen year old daughter of a prostitute. All her life she's felt judged, and she wants out of New Orleans and away from the stigma that surrounds her life. Josie longs to go to college and make something of herself, so she saves every cent she earns and dreams of a future where she escapes from the underbelly of the French Quarter. Where she is know by her own merits and not by her mothers talents. But life rarely goes as planned, and though it often brings heartbreak, it can also be filled with unexpected beauty and love.

Historical fiction is one of my favorite genres, especially when it is well-researched, well-written and a compelling story. Out of the Easy is all those things. I was completely immersed in Josie's search for identity and love, all the while I felt like I was learning about what it was like to live in New Orleans in 1950. From the dynamic cast of characters, including the way they spoke and wore their hair, to the businesses they visited and secrets they hid, Ruta Sepetys brings the the colorful Quarter to life in vivid detail.

The copy of  Out of the Easy that I read (before I bought my own and got it signed) was from the library, and it had the word "Mystery" stickered to its spine. While this book does involve an unsolved crime, it's not the focus of the story. I think it it is a disservice to this book to think of it that way (plus you might wind up disappointed). Out of the Easy is really a coming of age story about a girl who thinks she's alone in the world, because she is judged for who she is, and because she sees "bad" people all around her. But through the course of the story, this girl begins to see how many people do care for her, and that she's not alone after all.

Out of the Easy has a light sweet romance in it that builds gradually throughout the book. Although there is a hint of a love triangle, it was clear to me from the beginning who Josie's choice would be. In fact, I would hesitate to call this a love triangle at all, but more of an interest triangle. The love story is the realistic kind, and Josie's choice grows naturally out of her development in the story.

I didn't know how much I'd been missing the historical fiction genre recently until I picked up Out of the Easy. Not only is Josie's story a fresh and engaging coming of age tale, the book feels authentic. It is also readable and accessible, which I think people sometimes fear with this genre. What better way to get to know a specific time and place, than through a story? But it's not only that. While reading about Josie's struggles in 1950s New Orleans, you just might learn something about your own life. Ruta Sepetys has a gift for bringing the past to life, and I hope she keeps writing about it far into the future.

Last week I had the opportunity to meet Ruta Sepetys and learn about her research and inspiration for Out of the Easy. Read a recap of the discussion with pictures and more, HERE.
Posted by Lauren @ Love is not a triangle at 12:01 AM