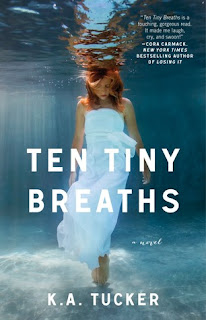 A few weeks ago I read Ten Tiny Breaths by K.A. Tucker, and this is supposed to be a review of that book. I will get to it eventually, but first you're going to find out a little about how my brain works, and how that affects the books I read sometimes. I think many people will really like Ten Tiny Breaths, and my reaction to it may have more to do with the order in which I read certain books, than it does that book specifically. But sometimes I just cannot shut off the connections that my brain makes.

Recently, I've started to notice that a lot of New Adult books tend to have a similar plot line and types of characters, even though their stories and characters are different (I know that sounds contradictory, but bear with me). After reading several such books recently, I wanted to talk about it.

So there's this girl who has suffered some sort of trauma in her life, and this event has caused her to close herself off emotionally to the world. She usually has few to no friends, and is completely unaffected by guys, though occasionally she uses them anyway.

Then, as is the way of all books, something changes for her. She moves to a new place, and/or meets someone new (this new person is a guy, of course). All of a sudden, with the prodding of of this guy, she begins to wake up and slowly break down her walls.  There are various reasons given for why this guy is the first person who has made it past this girl's emotional block, although often his hotness and striking eyes are a factor. The girl futility tries to resist this guy's magical charms for a while. But there's just something about him that she can't fight, and soon she is letting him into her tightly controlled world. Of course this guy is able to wake up more than this girls' emotions. After some false starts, everything begins to seem great (or she pretends that it is), though of course as a reader you know that there's a huge freight train rushing towards the happy couple that is two seconds away from shattering their fragile calm.

This is the part when some thing happens that destroys the couple's delicate happy. It usually involves a negative trigger for the girl's past trauma, and as a result she can no longer hide that she is doing "fine." No matter what this new plot development is, it always leads to the girl realizing that she actually hasn't dealt with her issues, she's just pushed them to the side. This train wreck always causes mass chaos and a huge breakdown between the couple. They inevitably break-up and mope about for a while, during which time the girl really deals with her issues. Eventually the girl and guy get back together before the book ends.

Does anyone else recognize that plot?
I'll admit that it is a good one, and I've enjoyed several books that feature it, some of the ones in this post are my favorites. But I think I've read too many in a row recently that it's started to make me feel twitchy. With the New Adult genre so hot right now, the story arc especially seems to be increasing in popularity. Unfortunately, if I see the same story-line multiple times in a row, it stops reading as natural, and starts to look more like a plot device. I think that's the point I've gotten to with this one.

Maybe I'm being unfair.
I realize that I was being rather sarcastic in the description, and it's not really fair to simplify all of these books in that way. As I said, I really enjoyed the books pictured in this post, and not all of them are exactly like the outline. I don't want to trivialize any of these books, but I'm reacting to the shear number of them that are out there.

Let's talk about some of the characters: The Girl.
I think the hardest time I have with this storyline is my ability to connect with the type of girl who is closed off to everyone around her. She is usually struggling from some form of PTSD or depression due to the past trauma. I don't want to belittle what she's gone through, or judge anyone's coping mechanisms, healthy or otherwise. I know that many people in real life have experienced horrifying situations. I get that what she feels is real to her, but that doesn't change the fact that she's popping up everywhere, and that her character is starting to seem overdone and unimaginative. Or the fact that I don't always understand her actions. Not everyone who has suffered a traumatic event acts like she does. If I'm being honest, often I just want to shake some sense into her and tell her to WAKE UP AND DEAL WITH YOUR LIFE!! Because really she's only hurting herself in the long run.

The Guy.
In most of these books, one of my favorite characters is the guy the girl meets. He's almost always suffered his own share of problems and heartbreak, but I usually find him to be more approachable and relatable than she is. Often because he's a bit further along in the healing process than the girl, or he deals with his pain less hostilely. Although it's not always clear what draws the guy to this girl when she's closed off and unfriendly, I'm thankful for his role in her healing process (as well as the swoon he provides). God bless him.

So what's your point?
I am not writing this post to be critical. As I said, I really enjoyed these books, especially Raw Blue, The Sea of Tranquility and Lovely, Dark and Deep (which to be fair, are a bit different from that general plot description above). And this genre is not the only one that features this type of female character. But that doesn't change the fact that I often find her frustrating and difficult to relate to. Or that I've started avoiding books where it looks like she's going to be the protagonist, because I'm not sure I want to deal with the same story again. Watching her emotionally fall apart over and over again in different books is exhausting. Hopefully, after a break, I'll be ready to face her again, because I really do want her to find some peace. 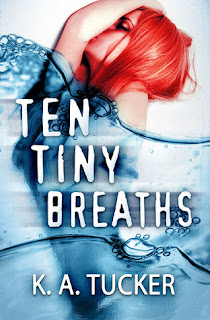 On Ten Tiny Breaths:
All these characters and this plot exist in Ten Tiny Breaths as well. Kacey Cleary's life was destroyed four years ago in a drunk driving accident and ever since then she's been trying to close off her emotions. When she escapes to Miami from a bad living situation at her aunt and uncle's house, she meets Trent Emerson. Trent is Kacey's sexy next door neighbor, who slowly finds a way into her heart. I really enjoyed the secondary characters, including Kacey's sister Livie and Kacey's new (and unexpected) friend Storm. I also liked that the sections of the book were broken down into the seven stages of grief, and how Kacey's journey through its pages mirrors them.

Although I will admit to having some trouble getting into this story without rolling my eyes, because I felt like I'd seen much of it before, I thought Ten Tiny Breaths got a lot more interesting as it went along. Especially when Kacey begins to deal with her past trauma. Although many of the revelations weren't a big surprise, I really liked where the book went in the last third with the description of Kacey's healing process. Trent also became more intriguing as the story progressed, and in the end I am glad that I met both of them.


Does multiple readings of similar plots or characters affect your view of individual books?
Do you ever have trouble relating to a type of character?