The Eternity Cure by Julie Kagawa

Note: The Eternity Cure is the second book in a series. My thoughts contain some spoilers for book one. Find my review of The Immortal Rules, HERE. 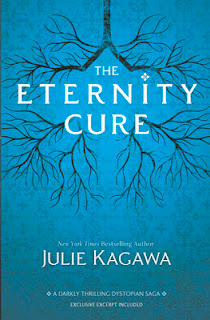 My summary: After leaving Zeke and the other humans safely in Eden at the end of The Immortal Rules, Allison is searching for her sire Kanin. Captured by "Psycho Vampire" Sarren, Kanin is being repeatedly tortured, and Allison knows that she's running out of time to save him. Her blood tie to Kanin allows her to sense where he is and also experience his increasingly bleak emotions. Allison's search for Kanin leads her all over the United States, including back to New Covington. As she travels, she runs into many characters - some old, some new and very few helpful. Allison also discovers more about the origin of rabidism, and realizes that circumstances in her world are even more dire than she’d originally thought.


If I could use a phrase to describe The Eternity Cure, it would be “blood bath.” With lots of violent, gory battle scenes, more vampires and rabids on screen, as well as a new and frightening population of deranged characters, this book is firmly planted in the horror genre. While Allison spent most of her time in The Immortal Rules as the lone vampire living with humans, in The Eternity Cure, she mostly travels within the vampire population, discovering just how scary they can be. This is probably why I spent most of the story on edge, with my stomach churning.

I really enjoyed The Immortal Rules. I thought Julie Kagawa's take on vampire culture in a dystopian world was fresh and engaging. I liked that Allison was fierce, and relatable but not whinny or annoying. I even enjoyed the tentative love story, especially because it was Ezekiel Cross (Zeke) who taught Allison to care for the welfare of others. In many ways Allison became more human and compassionate after she turned into a vampire, because of Zeke's influences. But despite the fact that I was excited for the continuation of Allison's story, I found that I was not able to muster the same enthusiasm for the sequel. It took me a lot of time to engage with the story and characters in The Eternity Cure, although I will admit that I was fully invested by the end.

One of the biggest issues I’m having with this series is the romance. Although I like both Zeke and Allison, I am finding myself emotionally unwilling to invest in a relationship between a mortal and an immortal, when the obstacles in the way of their happiness seem to make the effort not worth it. Unfortunately, this is how I felt for over half of the story. I will admit that this is a recent personal preference - and that I have no idea where this story will take these characters. To their credit, I thought Allison and Zeke's relationship got much stronger and more compelling as this book continued (Zeke also morphs into more of a badass). I am not opposed to them, I just wish that they made me more excited.

The Eternity Cure ends in a scene that is exceedingly stress inducing. Also for all the blood, gore and traveling that Allison did in this book, I’m not sure that this installment moved the overall story forward very much. Although there were a few revelations – at least one good, I was more interested in the psychological and moral aspects that were present in the first book. The second book mostly featured a continuation of the same internal questions that Allison had already wrestled with. However, I was very intrigued by Allison's character growth/change at the end of this installment. The last few chapters definitely made a difference. Because of that, I am interested in what Kagawa does to Allie in the third book.

The Eternity Cure was much more of an intense, fighting to survive story. Horror is not my favorite genre, and at times it was tough for me to get through this one. Even so, I was pleasantly surprised several times by characters who popped up unexpectedly in the story (I secretly kept hoping that Grimalkin would show up to save the day. Spoiler: He didn't.), and I especially love Allison's relationship with her mentor Kanin. Although I had a huge breakdown after the final sentence - where I declared "I hate it" and "I won't be reading the last one," on further reflection - after I got over my tantrum, I am invested enough to want to see where this story goes.

Cliffhanger Scale: This one is very debatable, some would say mild. I'm going to say HIGH for stress level, enough that I wish I hadn't read this over a year from the release of book 3.
Love Triangle Factor: None