Of Triton by Anna Banks

NOTE: Of Triton is the second book in a series. Find my review for Of Poseidon, HERE (or in the previous post). My review contains some spoilers for book 1. 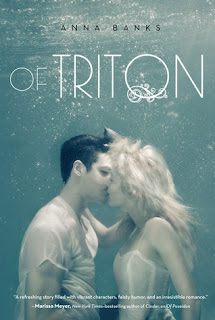 In this sequel to OF POSEIDON, Emma has just learned that her mother is a long-lost Poseidon princess, and now struggles with an identity crisis: As a Half-Breed, she’s a freak in the human world and an abomination in the Syrena realm below. Syrena law states that all Half- Breeds should be put to death.
As if that’s not bad enough, her mother’s reappearance among the Syrena turns the two kingdoms—Poseidon and Triton—against one another. Which leaves Emma with a decision to make: Should she comply with Galen’s request to keep herself safe and just hope for the best? Or should she risk it all and reveal herself—and her Gift—to save a people she’s never known? (From Goodreads)


I really enjoyed Of Poseidon, the first book in Anna Banks' mermaid series, despite a few hesitations (see yesterday's review HERE for my thoughts). And I don't think it's just because I've been obsessed with mermaids since I was a child. That seems to have been confirmed for me this week when I read Of Triton and liked it at least as much.

When Of Triton begins, Emma's life is in an upheaval, and she's not happy about it. As the only half-blood Syrena alive, she is realizing just how alone she is in the world. Her human father is dead, as is her best friend, and she doesn't have many attachments left on land. Still, that's where she's always lived, and the place she considers home. Emma's boyfriend Galen is a merman Syrena, and she's just discovered that her mother is the long lost Syrena princess. But Emma doesn't fully fit into their world either. She also resents her mom for lying to her about who she is. I will admit that I was totally with Emma when she threw a few tantrums at the start of the book - thankfully she realizes she needs to grow up a bit, before they got annoying.

I had a great time being back in Emma and Galen's heads again. Both of their voices are engaging and made me laugh out loud at times. Their perspectives are also both distinct and integral to the telling of this story. Emma continues to be feisty and strong willed, and Galen is protective and determined. I really liked seeing how well they understand and handle each other. They are both willing to take risks to keep the other (and their families) safe, but thankfully they were each able to do that without making transparently stupid decisions in the name of 'protecting' the other. Galen understands Emma and her moods, and he tempers her without undermining her independence, while Emma respects Galen without being a floor mat. Emma and Galen's relationship is much more settled now, which is good because they have bigger issues to focus on than each other. (Don't worry there are some swoony moments in here too).

I think one reason why I like this series so much is its great cast of characters. In addition to Emma and Galen, Rayna, Toraf, Grom and Nalia are back. It was amusing to see how Galen's siblings tend to chose similar types of mates, because they all mirrored the spirited female/steadier male counterpart model. Rachel and all her mob learned talents, continues to be one of the best parts of this series, but Toraf and especially Grom stood out to me in this installment. At least one other amusing relative shows up as well. As I was hoping for after the first book, the characters spend a lot more time in the Syrena world in Of Triton.

While the plot in Of Poseidon was largely focused on introducing the characters and figuring out Emma and her mother's identities, Of Triton is about the aftermath of those revelations. Namely, what will happen now that Nalia, the Poseidon princess, has been found, and how will they best keep Emma safe. Revealing that Nalia is alive launches the usually peaceful Syrena into a fierce political debate with all the ruthlessness and diplomacy of humans. I though this was a realistic and fascinating plot turn. However, in the end many of these issues were solved superficially, not really addressing all Emma's internal questions about the Royals and Syrena laws. I wish that there had been a little more upheaval and change, but hopefully that will come to play in book 3.

Of Triton is much more of a plot driven story than Of Poseidon, but its short 250 pages kept me reading quickly. Although there is something pretty shocking that happens at the end of this book, I was expecting a different kind of revelation to give this story a bigger impact. But even as is, I had a great time reading this book. Of Triton ends on a settled note, but I'm hoping Of Neptune confronts some of the deeper lingering questions.