Siege and Storm by Leigh Bardugo

Siege and Storm
by Leigh Bardugo
Read: March 1-5, 2013
Published: June 4, 2013 by Henry Holt and Co.
Source: ARC leant by Asheley @ Into the Hall of Books
Category: Fantasy, YA
Series: The Grisha Trilogy Book 2

NOTE: Siege and Storm is the second book in a series, my thoughts contain spoilers for Shadow and Bone, though you're pretty safe if you skip The Set-Up. If you have yet to start The Grisha Trilogy, see my spoiler free thoughts on book 1, HERE. 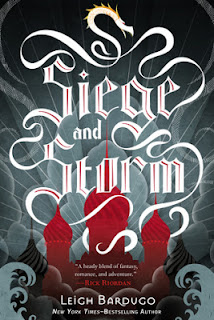 Darkness never dies.
Hunted across the True Sea, haunted by the lives she took on the Fold, Alina must try to make a life with Mal in an unfamiliar land, all while keeping her identity as the Sun Summoner a secret. But she can't outrun her past or her destiny for long.
The Darkling has emerged from the Shadow Fold with a terrifying new power and a dangerous plan that will test the very boundaries of the natural world. With the help of a notorious privateer, Alina returns to the country she abandoned, determined to fight the forces gathering against Ravka. But as her power grows, Alina slips deeper into the Darkling's game of forbidden magic, and farther away from Mal. Somehow, she will have to choose between her country, her power, and the love she always thought would guide her--or risk losing everything to the oncoming storm. (From Goodreads)

The Set-Up:
Alina and Mal are on the run from The Darkling, and they are worried that they will never be safe again. Although she is happy to be free, Alina cannot use her powers for fear of discovery, and she is weak and beginning to wither from hiding them. No longer The Darkling's Grisha, she feels purposeless, and is haunted by the deaths she caused when she and Mal escaped the Shadow Fold. Because Mal deserted the army, he can never return either, but he is far more at ease and adaptable to their life in hiding.

However, Alina and Mal's peace - no matter how false it really is - doesn't last long. Soon they are thrust back into the action, and Alina realizes that she cannot escape from her power or from the mounting internal and external pressure that is amassing because of it.

The Plot and Characters:
In Siege and Storm, Alina must face what it means to be the Sun Summoner amidst an increasing number of people who want to use her ability for their own purposes. She continues to struggle with loneliness and self doubt, even while she relishes the strength and power that she feels when she is summoning light. Alina also contends with sea voyages, mythical creatures, monsters, battles, flying machines, costumes, saints and pilgrims. Oh and The Darkling of course, who has a talent of popping up when you least expect it. But is he right in claiming that he is the only person who understands Alina's power and as an extension of that, her?

If anyone could steal attention away from the The Darkling - who somehow still succeeds in making seething darkness look sexy - it would be pirate, of course! Or rather a charismatic privateer named Sturmhond, who has an abundance of charm as well as an agenda of his own. He is hands down the scene stealer of this book, and you definitely don't want to miss him. But we also get to see old faces again and meet some additional new ones, including a kick-butt set of twins that I would not want to be caught on the wrong side of.

Where does Mal fair amidst the other two overachieving males? Mal is still the best tracker and in demand because of it. But what gives him an edge in my book, is the fact that he is the only person who has loved Alina all her life, before she became a powerful Grisha. His interest in her does not lie in what she can accomplish for him, and that makes him the only person she feels like she can trust. But the question is, can he love her now that she is a Grisha? And is there a future that ends with them together? Both Mal and Alina make mistakes in this book, that definitely don't help matters any.

I wouldn't call this story a love triangle from Alina's point of view, because I think she' has always loved Mal. Even so, there are several people who are more than willing to step into his place. Whether or not their feelings for Alina are genuine or tied to how much they need her - or how amenable Alina is to their advances, you'll have to make your own judgements.

The Conclusion:
Siege and Storm is exciting from the beginning. I loved exploring more of the Russian-inspired world that Leigh Bardugo has created, as well as the waters that surround it. The story does slow down a bit in the middle, when the book becomes much more Alina introspective. But the action increases exponentially near the end. Remember in Shadow and Bone when you think everything is going one way and then, BOOM! - suddenly there's a huge explosion that completely changes the landscape? Siege and Storm had a couple of moments like that, as well as another high stakes ending. Thankfully, this plot wraps itself up well. Although there are hints of what is to come and a feeling of looming danger, this is not a cliffhanger. I cannot wait to find out what Leigh Bardugo has in store for us in Ruin and Rising.