Written in Red by Anne Bishop 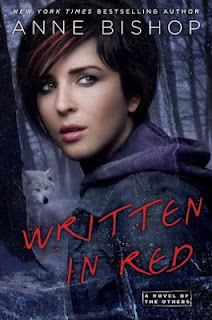 No one creates realms like New York Times bestselling author Anne Bishop. Now in a thrilling new fantasy series, enter a world inhabited by the Others, unearthly entities—vampires and shape-shifters among them—who rule the Earth and whose prey are humans.

As a cassandra sangue, or blood prophet, Meg Corbyn can see the future when her skin is cut—a gift that feels more like a curse. Meg’s Controller keeps her enslaved so he can have full access to her visions. But when she escapes, the only safe place Meg can hide is at the Lakeside Courtyard—a business district operated by the Others.
Shape-shifter Simon Wolfgard is reluctant to hire the stranger who inquires about the Human Liaison job. First, he senses she’s keeping a secret, and second, she doesn’t smell like human prey. Yet a stronger instinct propels him to give Meg the job. And when he learns the truth about Meg and that she’s wanted by the government, he’ll have to decide if she’s worth the fight between humans and the Others that will surely follow. (From Goodreads)
__________________________________________________________________________


The more I think about Written in Red, the more I like it, and I liked it a lot right after I finished it. Anne Bishop's world, and its cast of characters featuring humans and terre indigene or Others, are complex and well imagined. I was fascinated by the characterization of each type of Other - the huge and scary wolves, who might eat humans, but like to run and play; the crows' attraction to shiny things; the ponies who can cause massive elemental destruction but also loves sugar lumps. These animals and creatures are unapologetic about being not-human, and can be scary and dangerous. But this story isn't about them trying to conform to the human world, it's about Meg fitting into theirs. Along the way she changes them too, but they are always going to be dangerous and Other, which is one of the reasons why I enjoyed this book so much.

Anne Bishop's story is highly detailed and slow moving at first, as she takes time to introduce her society and build her story. But Written In Red is definitely worth the extra time spent investing in it. The story follows several characters, but the plot centers around the human and blood prophet, Meg Corbyn. Although a third person limited perspective, featuring several voices can slow down a storyline a bit in the beginning, I actually love this writing style. Especially seeing a broader picture of the society and action, finding out what the different players thought of each other, and watching them strategize and underestimate one another.

Although Meg is physically weak at first, because she has been kept that way by her Controller, she is clever and resilient. I know some people don't like heroines that aren't kick-butt and appear naive and needy at first. But they are sometimes my favorite, because they are almost always underestimated. Meg is that type of heroine. Because of her captivity she sees the world differently, and her ability as a blood prophet is fascinating and terrifying. I enjoyed watching her immerse herself into the lives of the Others, and also surprise and sometimes outsmart them. Along with Meg, many other characters stole my heart including Tess, Grandfather Erebus, Simon, Monty and especially Sam.

Besides the pacing at the start of the book, there are two other aspects of this story that bugged me. First, for all the descriptions of the Others' community and Meg's daily life, there are some details that seem notoriously absent. For instance, we are told that Daphne was Sam's mother, but there is never a mention of his father. We also know that Elliot is Simon's father but a mother is never mentioned. Perhaps I missed something, but this seemed like an odd omission. In fact almost nothing is officially said about the mating/child rearing nature of the culture, or how exactly families or packs operate. However, I have a feeling that some of these details will come out in the future. Second, although the characters were usually very perceptive, and I enjoyed watching them out maneuver each other, there was at least one instance near the end, when they seemed overly obtuse and didn't pick up on some details that I thought were fairly obvious. Or maybe it's just that there was a certain character that I wanted taken out much sooner.

Written In Red does not feature any sort of visible romance, and I think it's better because of that. What this book does have is a slow building connection that has the potential to be one of my favorite types of love stories. I don't know where Bishop will take her characters next, but I really like the foundation that she built between some of them. I can't wait for them to figure out (and be forced to deal with) what is going on between them. My most favorite romances are always the very slow burn kind. But even if it never happens, this is a great book.

Despite a few minor hiccups, I really fell for Written In Red. I found Anne Bishop's world and it's inhabitants to be complex and believable. It is clear that she spent a lot of time imagining  this society, and I got completely lost in it.

Written In Red is wraps itself up well. The action is completed and there is no cliffhanger. However, it is part of a series and many issues are brewing that will come to play in the future. I cannot wait to get my hands on Murder of Crows in 2014.