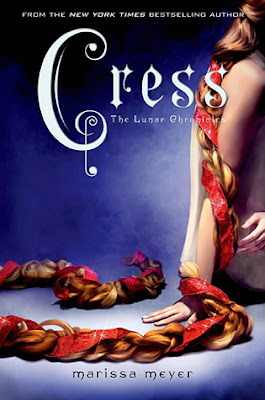 Rapunzel’s tower is a satellite. She can’t let down her hair—or her guard.
In this third book in the bestselling Lunar Chronicles series, Cinder and Captain Thorne are fugitives on the run, with Scarlet and Wolf in tow. Together, they’re plotting to overthrow Queen Levana and her army.
Their best hope lies with Cress, who has been trapped on a satellite since childhood with only her netscreens as company. All that screen time has made Cress an excellent hacker—unfortunately, she’s just received orders from Levana to track down Cinder and her handsome accomplice.
When a daring rescue goes awry, the group is separated. Cress finally has her freedom, but it comes at a high price. Meanwhile, Queen Levana will let nothing stop her marriage to Emperor Kai. Cress, Scarlet, and Cinder may not have signed up to save the world, but they may be the only ones who can.
_________________________________________________________________

With each book I read in the Lunar Chronicles, I fall deeper in love with Marissa Meyer's characters and her storytelling. It's well documented in my letter to the author after I read Scarlet, that I had mixed feelings about Cinder but was completely hooked on the series by the end of book two. Cress is even better. Although Scarlet and Wolf remain my favorite pairing, this book is the most complex and exciting. I was on the edge of my seat for nearly the entire way through, riveted to these characters' stories and the twisting plot.

Although we now have three main couples, plus secondaries and villains, Meyer has managed to make all of the characters feel present and vital, even when they are separated or at odds with each other. Even more than Cinder and Scarlet, Cress manages to balance several story lines without slowing down the plot. And possibly my most favorite aspect of this series is how Meyer continues to play with fairytale details in surprising ways, continually making her stories fresh and original.

This time it's Cress and Thorne's turn in the fairytale spotlight. And if you don't yet know what story they come from, it's the one with the girl with the long hair. I really enjoyed seeing details from Rapunzel in Cress, especially because this fairytale is not quite as widely known as the previous two inspirations.

With so many plots converging, Cress and Thorne are not the only characters or storyline in the spotlight. We meet a few new characters, finally glimpsing all of our major players. We also travel throughout earth, into space and onto Luna. One of my favorite parts of this series is the wonderful mix of sci-fi space elements, including satellites and space ships, with a variety of continents and cultures. In Cress, we're also seeing all the pieces of this story line up, getting a larger picture of this world and what these characters will be facing in the final book Winter. I can't wait.

Despite the fact that these are fairytale characters - some with exciting 'extra' abilities, because of their Luna (alien) natures - they have real struggles and insecurities. They can be pretty quirky (or even odd) at times, and they are incredibly strong in some ways and vulnerable in others. It's an interesting juxtaposition that serves to make the characters relatable, and also creates many nail biting scenes. I'm very much enjoying the dynamic between all of them, and the ways Meyer forces different members of the 'team' to work together.

Here's the thing, despite how much I adored this book and the Rapunzel storyline, Cress and Thorne are not my favorite couple. They don't seem evenly matched or like they have much if any common ground. I just didn't sense a lot of chemistry between them. I'm hoping this will change on the final book. However, surprisingly, none of this dragged down Cress for me.

Love Triangle Factor: None
Cliffhanger Scale: Low/Medium - Present action wrapped up. But lots more to solve to complete the series.