Double Feature: When the Sea is Rising Red and
House of Sand and Secrets by Cat Hellisen 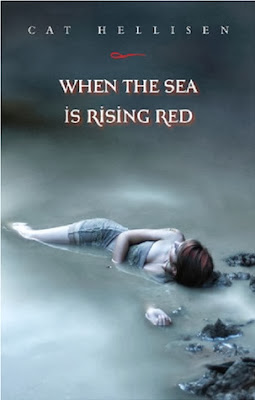 After seventeen-year-old Felicita’s dearest friend, Ilven, kills herself to escape an arranged marriage, Felicita chooses freedom over privilege. She fakes her own death and leaves her sheltered life as one of Pelimburg’s magical elite behind. Living in the slums, scrubbing dishes for a living, she falls for charismatic Dash while also becoming fascinated with vampire Jannik. Then something shocking washes up on the beach: Ilven's death has called out of the sea a dangerous, wild magic. Felicita must decide whether her loyalties lie with the family she abandoned . . . or with those who would twist this dark power to destroy Pelimburg's caste system, and the whole city along with it. (From Goodreads)

When the Sea is Rising Red drops readers right in the middle of a rich fantasy world with magic, social, political hierarchies and relationship that are not bound by gender. In this world, the higher class or Lammars, retain power through their ability to do magic. But they require a powerful and addictive drug called scriv to do so. The lower Hob class has no magic but they are not without their drugs too. Then there are vampires and a whole host of other magical beings inhabiting this society. But none have the ruling power of the upper class.

Felicita is from one of the oldest and most powerful families. But as a 16 year old girl, she doesn't have much control over her own life choices. When her best friend commits suicide to avoid being married off for political gain, Felicita is heartbroken. When Felicita is told she too is to be married, she fakes her own death and runs into the lower class hob neighborhoods.

Felicita is an interesting heroine to follow. She is overly naive and prejudice against the lower class due to how she's been raised. She makes lots of stupid choices that made me cringe and yell at her, and I didn't always like her. But she was complex, and I believed her characterization. I also found myself rooting for her despite myself. The longer Felicita lives in the lower class neighborhoods and interacts with the people she meets there, the broader her perspective becomes. I appreciated the slow growth of her character and the ways she reveals her inner strength although it was hard earned, and definitely stress inducing at times.

When Felicita escapes she falls in with a group of people led by Dash a charming and enterprising hob who has an agenda of his own. Although complicated, I likes this group, and I especially enjoyed watching Felicita's perspective slowly shift by knowing them. Felicita also meets Jannick in the city, a vampire whose family has some power. He also plays a vital role in Felicita's journey through this book.  The relationship between Felicita, Dash and Jannick is quite interesting. I can't say much that isn't a spoiler but there is a love triangle of sorts at play that was not something I've read before. If you are love triangle hesitant, but like romance and high fantasy, I'd encourage you to read this book and then the follow up below, close together as I did.

When the Sea is Rising Red is not your typical YA both for its characters and also this complex world and story that takes time to digest and navigate. But I quickly became completely hooked on this story and I found it to be an utterly enchanting read.

NOTE: I attempted to make my review of House of Sand and Secrets spoiler free if you've not read the first book. But please skip the summary beside the book image if you haven't read When the Sea is Rising Red. 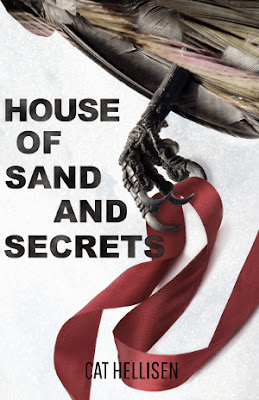 Sometimes playing to lose is the only way to survive the game of Houses.
Trapped in an arranged marriage to lower-caste Jannik and trying to make the best of her fall from grace, Felicita is immersed in the machinations of powerful families. MallenIve is worlds apart from Felicita’s native Pelimburg, and her family name and standing will not help her here. Haunted by her past and those who died because of her, she attempts to regain her status as the scion of a once-great house.
If MallenIve’s leaders have their way, Jannik will soon have no more rights than an animal, and a union that once seemed to offer a solution to Felicita’s problems is now a liability. Felicita’s feelings are conflicted and it is all too easy to fall into the prejudiced mindset of the higher castes … until faceless corpses begin turning up on the rubbish tips, and Felicita might be the only hope Jannik’s people have.
Set after the events of When the Sea is Rising Red, House of Sand and Secrets is out 23rd October 2013. (From Goodreads)
__________________________________________________________________________

House of Sand and Secrets begins a few months after the end of When the Sea is Rising Red. While the author has called all of the books in her "Hobverse" series companions that could be read in any order, I would argue that these two stories are a solid duet. House of Sand and Secrets again follows Felcita, continuing the emotional and personal growth she began in the first book. I read these novels back to back, and I found it to be extremely rewarding to experience them as a pair. However, while WTSIRR was published as a YA book, I'd consider HOSAS to have crossed the line into adult fiction. The story and themes have Felicita navigating much more in an adult world, especially in her responsibilities and relationships.

While it was sometimes hard to tell what Felicita was thinking in When the Sea is Rising Red, causing a bit of disconnect and frustration between me and her, she is much more reflective and aware of herself in House of Sand and Secrets. Felicita feels guilt for past choices and works to correct them. Her change from the first story is tremendous and one of my favorite parts of this book. That isn't to say she doesn't still make a few decisions that made me want to strangle her. But Felicita is so much more self aware and trying her best. I truly loved her progress throughout this book, and I especially enjoyed seeing how far she's grown since the start of book one.

I also adored the romance in House of Sand and Secrets, although I thought I'd hate it at first. It is tough in the beginning, and had my stomach in uncomfortable knots for a while, but the payoff is hard won and sweet. I loved seeing the power of these two together. How well they balance each other and what they could accomplish when they were on the same page and had the same goals. This is another aspect of HOSAS that I think was stronger for me because I'd read WTSIRR, and watched how the relationship between these two has developed throughout the series.

What I like about Cat Hellisen's stories is that she has created a complex and rich fantasy world with a detailed society and political climate, and stuck a very human, personal story about one girl within it. The strongest theme carrying throughout this series is Felicita. This book stays focused on the characters instead of what needs to be fixed in this society, although that is very much present and it would be impossible to separate the characters from their world. However, I am hoping that we get to see some more changes come in the next book in the series.

If you've read and enjoyed When the Sea is Rising Red, House of Sand and Secrets is a must read. If you've yet to start the series these two books read very well back to back. Although the location and problems shift, there is continuity in the overall issues in this world as well as in Felicita's growth as a person and in her relationships. The lush fantasy world also enchanted me, and got stronger as the series progressed. I really liked WTSIRR, but I fell hard for HOSAS and cannot wait for whatever else Hellisen writes.

At end of House of Sand and Serets, there is an excerpt from the next Hobverse book. According to Hellisen's website, Bones Like Bridges takes place 10 years after HOSAS and will focus on new characters, but Felicita will be present as a minor characters. The larger Hobverse society is still very much in turmoil when HOSAS ends, and I'm very curious to see how the story continues years later. I'm hoping that we will get a chance to see a larger explosion of the political and societal issues that are presented in the first two books in this series.