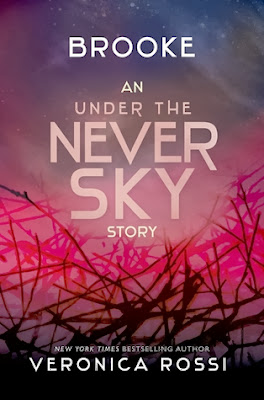 Summary: Set just before the events of Into the Still Blue, the conclusion to Veronica Rossi's Under the Never Sky trilogy, this breathtaking novella is a satisfying stand-alone for new readers as well as an exciting glimpse at favorite characters from the trilogy. Pulsing with romance and danger, Brooke will leave readers desperate for the conclusion to this epic and unforgettable saga.
The only fight she can't win is the one for Perry's heart. Following the stunning climax in Through the Ever Night, the Tides have been forced to seek shelter from the Aether storms in a dismal, secluded cave. But Brooke's memories of the cave go back much further, to when she and Perry used to come here together. That was before Perry fell in love with Aria and before Vale's dealings with the Dwellers altered the course of the Tides forever.Now, with her sister back from a haunting year in captivity and Aria lying unconscious in the sick bay, Brooke struggles to put the pieces of her life back together. Without Perry, who is she? And what is her role in this frightening new world? As these questions swirl about her, an old threat to the Tides resurfaces, and Brooke is forced to put the lives of her people before her own. But in taking this step outside of herself, Brooke may finally discover what she truly wants.

Thoughts: I liked this novella a lot, despite being hesitant at first to read Brooke's POV. I will take any chance to get back into this world, but didn't expect how much I would understand Brooke by reading the story that bears her name. Brooke is hurt and angry about losing Perry to Aria - or that's how she sees the problem. But as Brooke reflects on her heartbreak, amidst the return of her sister and the ever present Aether storms plaguing her tribe, I began warming to her. Behind her sometimes abrasive exterior and role as a warrior and protector of her people, is a girl who longs to find a love who puts her first. After spending this time in Brooke's head, I have so much more respect for her. I can completely relate to her struggles and admire her strength.


What do I want? I have to think about it for a moment. I want to feel wanted and cherished and safe. I want to find someone who won't trade me for another. I want to find love that is visceral and life-sustaining.

Of course I also enjoyed seeing Perry and Aria from an outside perspective. I would gobble them up if I could. I read Into the Still Blue before Brooke, and while it's not vital to read this novella to understand the conclusion of the series, I did find it to be valuable in enriching this world and characters. It is also a great transition between books two and three. 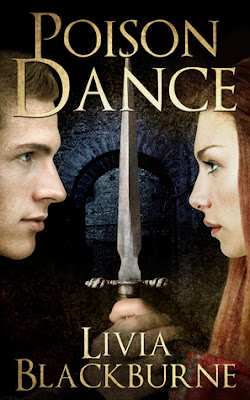 Summary: James is skilled, efficient, and deadly, a hired blade navigating the shifting alliances of a deteriorating Assassin’s Guild. Then he meets Thalia, an alluring but troubled dancing girl who offers him a way out—if he’ll help her kill a powerful nobleman. With the Guild falling apart, it just might be worth the risk. But when you live, breathe, and love in a world that’s forever flirting with death, the slightest misstep can be poison. Poison dance is approximately 14,000 words, or 54 printed pages.

Thoughts: My appetite is officially whet! Poison Dance is a prequel novella for the upcoming Midnight Thief, which will be released by Disney - Hyperion next July 2014. Poison Dance follows James, a member of the Assassin's Guild, who is approached one night at a tavern by a dancing girl named Thalia. If he will help her kill someone, she offers him a lucrative trade opportunity and a possible way out of his job.
This story is not long, just 54 pages, but what it offers is a glimpse into the world and characters that we'll meet again in the full length novel (according to the author, four characters overlap). Basically Poison Dance just made me want more. I'm a big fan of stories about assassins, especially those that turn them into likable characters, contradicting their harsh and unforgiving jobs. Poison Dance provides a closer glimpse at James, who a supporting character in Midnight Thief. From this prequel, I'm intrigued by him. He is very good at what he does, but what I really liked were the moment when his personal side comes out, both his care for his friends and also for this girl who seeks his help and slowly works into his heart. The emotions in this book are muted, but I like stories that make me read between the lines, and James doesn't give anything away easily. I'm very curious about how we'll see James in the full length novel, which takes place after this novella. I have a feeling that he'll continue to be careful about what he reveals of himself.

Midnight Thief is a Young Adult Fantasy, but author Livia Blackburne says that she'd consider Poison Dance to be Adult Fantasy because it is a bit darker in comparison. James is an assassin and some of the themes are more mature. But much of the heavier content is implied instead of witnessed, so I think it's a very manageable read if you're worried.

If you've read the book description of Midnight Thief and you're wondering (or fretting as I tend to do) about love triangles, the author assured me that it will have a Love Triangle Factor of Mild. Take that as you will, but I am relieved. 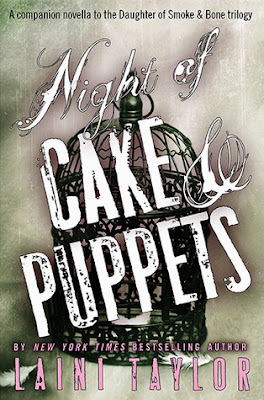 Night of Cake and Puppets
by Laini Taylor
Read: December 2, 2013
Published: November 26, 2013 by Little, Brown Books for Young Readers
Source: Kindle purchase
Category: Fantasy, YA, (for this novella: Contemporary with a splash of magic)
Series: Daughter of Smoke and Bone 2.5
Find: Goodreads | Amazon

Summary: In Night of Cake & Puppets, Taylor brings to life a night only hinted at in the Daughter of Smoke & Bone trilogy—the magical first date of fan-favorites Zuzana and Mik. Told in alternating perspectives, it’s the perfect love story for fans of the series and new readers alike. Petite though she may be, Zuzana is not known for timidity. Her best friend, Karou, calls her “rabid fairy,” her “voodoo eyes” are said to freeze blood, and even her older brother fears her wrath. But when it comes to the simple matter of talking to Mik, or “Violin Boy,” her courage deserts her. Now, enough is enough. Zuzana is determined to meet him, and she has a fistful of magic and a plan. It’s a wonderfully elaborate treasure hunt of a plan that will take Mik all over Prague on a cold winter’s night before finally leading him to the treasure: herself! Violin Boy’s not going to know what hit him.

Thoughts: Night of Cake and Puppets is the story of Zuzana and Mik's first date, which reads exactly like an enchanting dream.


I have scuppies in my pocket and lust in my heart. Tonight's the night.

We watched Karou’s best friend pine for her violin boy in Daughter of Smoke and Bone and we had the pleasure of seeing Zuzana and Mik together in Days of Blood and Starlight. In fact their relationship was one of the sweet, happy elements in the stunningly dark book. But how did the rabid fairy with the voodoo eyes snag her man? In a Night of Cake and Puppets we get to see the events unfold like a delicious fairytale brought to life.

How did this enchantment turn into a real live kiss? Through careful planning, a treasure map, puppets, cake, music and a bit of magic. Two things I especially loved about this short novella: 1) Although Zuzana is the catalyst for the evening's events, both she and Mik are active participants in the festivities. It's pretty clear that these two are going to be excellent together. 2) Amidst this sugar coated story is some bite. Night of Cake and Puppets features Taylor's perfect blending of lush writing with some mystery and mood thrown in to keep you from getting too comfortable.

Laini Taylor's writing is so gorgeous I wish I could eat it with a spoon. I seriously highlighted so many passages in this novella, it was crazy.

Knit cap, brown leather jacket, violin backpack. Sweet, cold-pinked cheeks. What a lovely display of personhood. He's like  a good book cover that grabs your gaze. Read me. I'm fun but smart. You won't be able to put me down.

I want to do mysterious and improbable things alongside a fierce and beautiful girl who looks like a doll brought to life by a sorcerer.

Hell. Seeing her shiver, I want to take her into my coat and button it around her. I want to warm my face against her neck and steam her up like a mirror and write my name on her with my fingertip.

Now I'm feeling pretty desperate to get my hands on Dreams of Gods and Monsters and read the conclusion of Karou and Akiva's story. I'm crossing my fingers that their final book is going to blow this romantic evening out of the water. But it's going to be amazing, even if it's a complete tragedy.