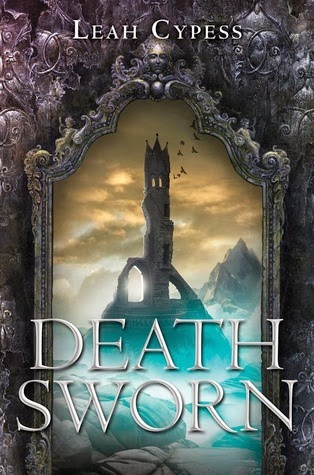 When Ileni lost her magic, she lost everything: her place in society, her purpose in life, and the man she had expected to spend her life with. So when the Elders sent her to be magic tutor to a secret sect of assassins, she went willingly, even though the last two tutors had died under mysterious circumstances.
But beneath the assassins’ caves, Ileni will discover a new place and a new purpose… and a new and dangerous love. She will struggle to keep her lost magic a secret while teaching it to her deadly students, and to find out what happened to the two tutors who preceded her. But what she discovers will change not only her future, but the future of her people, the assassins… and possibly the entire world.

Ileni is a sorceress. Or at least she used to be before her powers started to fade. In her world many children are born with an infinity towards magic, but for most of them it fades before adulthood. As a child, Ileni was tested and approved for training as a sorceress, but somehow the Elders made a mistake, because in the last year her abilities have begun to disappear. Soon they will be completely gone.

Now Ileni has a new mission that might as well be a death sentence. Her Elders have sent her to be a tutor to a secret sect of assassins who live and train deep in a network of mountain caves. Their last two tutors died of mysterious circumstances, and part of Ileni's task is to discover what happened to them. As she does this, Ileni must work hard to keep her fading powers a secret. This task proves to be more difficult the longer she is in the caves, completely surrounded by boys who wouldn't hesitate even a second to kill her if they were ordered to do so - or if a good opportunity arose.

Ileni is dealing with a lot in this book. Her whole way of life and future has been taken away, including the boy who easily left her behind when her fading power was discovered. Ileni's people essentially sentenced her to die by sending her on this mission, and now she's the only girl in the middle of a group of hostile killers. It's no wonder that Ileni's on edge for most of this story. Maybe that's why I never felt very emotionally connected to her. I really liked watching Ileni grown into her own person, but her character felt very narrow at times - focused solely on her fading talent and her task.

Death Sworn features assassins that actually assassinate. This book is gritty in places, and I really appreciate that the author didn't soften their trade at all. Ileni enters the assassin's cave society believing that these boys are all killers for hire, working solely for money without conscience. But then she meets Sorin, the assassin assigned to protect her, and sees his incredible conviction for his way of life. Sorin doesn't push Ileni into his perspective but quietly challenges her preconceived notions and encourages her to begin to think for herself.

Ileni is surprised to discover that the assassins have a well thought out belief system. At first, she feels only fear and disgust for their way of life, but as the story continues she begins to understand that the world is not as black and white as she originally imagined. I really enjoyed this transition in Ileni's character, as well as the difficult questions this book asks about responsibility, conviction, and how much you should sacrifice for the greater good. I also loved how Sorin's character balances and counters Ileni's, and the way this leads into a subtle but lovely romance between them.

Besides the assassins' cave network Ileni's world is made up of the Empire, a powerful society of people run by sorcerers, and the Renegai who split from the Empire 400 years ago to escape the nation's brutality. Ileni is a Renegai, a people dedicated to peace. Because the entirety of this book takes place in and around the assassin's caves, we have to be told everything about the outside world. Unfortunately, that's where this book becomes a little foggy for me. I still feel unclear on the location and set up of these outside societies. Yet, as the story continues we learn that they are very important to the overall tale. I'm hoping we're going to get more information in the next installment, but I wish the context for the world would have been more clear from the beginning.

Death Sworn is a quick enjoyable read, that features an intriguing concept and asks some thought provoking questions. It is a book with assassins that are appropriately brutal, and a heroine who is losing her magical powers instead of gaining them. The plot and mystery is twisty and surprising. But I still wanted a more out of this book. Although I was engaged in this story, I left it wishing that I knew this world and some of the characters a little bit better. Death Sworn does a very good job at the areas on which it focuses, but it could have been better at setting those ideas into a broader, richer context.

The end of Death Sworn is surprising and gutsy, and a great set up for book two in this duet. Everything indicates that the weaker elements will become stronger in the final installment.

Love Triangle Factor: None in this book.
Book Two Love Triangle Predictions: Slight possibility that Ileni's former boyfriend could revive his interest, though I think it's a very unlikely that Ileni would reciprocate. Sorin is a much better catch!
Cliffhanger Scale: Medium. No immediate danger, but a lot is still unresolved. End of book 1 is definitely the middle of the series, but not stressful place.