Waiting on Wednesday: Salt and Storm by Kendall Kulper

Waiting On Wednesday is a weekly meme, hosted by Jill at Breaking the Spine
that spotlights upcoming releases we can't wait to read

This week I can't wait for 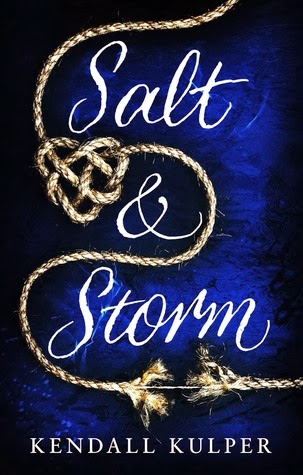 Sixteen-year-old Avery Roe wants only to take her rightful place as the witch of Prince Island, making the charms that keep the island’s whale men safe and prosperous at sea. But before she could learn how to control her power, her mother, the first Roe woman in centuries to turn her back on magic, stole Avery away from her grandmother. Avery must escape from her mother before her grandmother dies, taking with her the secrets of the Roes’ power.
When Avery awakens from a dream foretelling her own murder, she realizes time is running short—for her and for the people of her island, who, without the Roes, will lose their ships and the only life they know.
With the help of Tane, a tattooed harpoon boy from the Pacific Islands, Avery plots her escape from her mother and unravels the mysteries of her mother’s and grandmother’s pasts. Becoming a witch may prevent her murder and save her island from ruin, but Avery discovers it will also require a sacrifice she never expected—one she might not be able to make.

I basically want to read this book because that cover is GORGEOUS. Also, the island where this book takes place is apparently set off of New England somewhere. And there's a tattooed harpoon boy and magic.

What are you waiting on this week?
Posted by Lauren @ Love is not a triangle at 12:00 AM