The Shadow Throne by Jennifer A. Nielsen 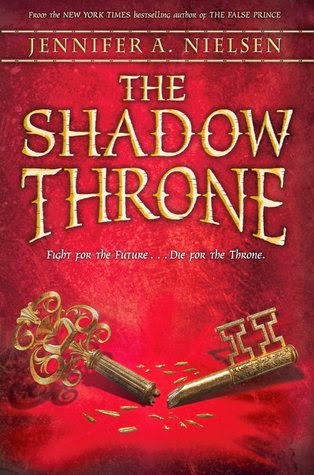 NOTE: The Shadow Throne is the third book in a series. My review contains some spoilers for the first two books. See my thoughts on The False Prince and The Runaway King.

Goodreads summary: One war.
Too many deadly battles.
Can a king save his kingdom, when his own survival seems unlikely?
War has come to Carthya. It knocks at every door and window in the land. And when Jaron learns that King Vargan of Avenia has kidnapped Imogen in a plot to bring Carthya to its knees, Jaron knows it is up to him to embark on a daring rescue mission. But everything that can go wrong does.
His friends are flung far and wide across Carthya and its neighbouring lands. In a last-ditch effort to stave off what looks to be a devastating loss for the kingdom, Jaron undertakes what may be his last journey to save everything and everyone he loves. But even with his lightning-quick wit, Jaron cannot forestall the terrible danger that descends on him and his country. Along the way, will he lose what matters most? And in the end, who will sit on Carthya's throne?
Rousing and affecting, Jaron's adventures have thrilled and moved readers in The False Prince and The Runaway King. Journey once again with the Ascendant King of Carthya, as New York Times bestselling author Jennifer A. Nielsen brings his story to a stunning conclusion with The Shadow Throne.
______________________________________________________________________


The Shadow Throne is the final book in Jennifer A. Nielsen's Ascendence trilogy. Carthya is at war, Imogen has been kidnapped and things are looking pretty bleak for Jaron and his country. Thankfully, our young king works well under pressure.

Jaron continues to be my favorite thing about this series. He's apt to complain loudly if it serves his purposes and he can seem reckless and impulsive. He outsmarts everyone around him, but still puts those he loves above any of his own needs, which tends to place him in extremely stressful situations. His ability to look at a problem from a different direction from everyone else is one of my favorite of his characteristics. In this book Jaron gains confidence, wisdom, and learns about love and sacrifice.

One element that stands out to me about the third book in this series is how much Jaron matures in his relationships with others. Especially, how his interactions with Ronan and Tobias have grown since the first book. I also continue to love his connection to Mott. It's fun to see how Jaron is able to continually rile up his mentor, but also how their connection and mutual respect has deepened through the series.

As these characters are at war, there is a lot more fighting going on in this story, and Jaron faces some tough situations. This book has some really intense and exciting parts throughout. I thought the book slowed down a bit in the middle, but I was on the edge of my seat for the first half and also the end. I couldn't always figure out what Jaron was up to, and I like that he still surprises me at times. Although this series is told in Jaron's first person male perspective, I appreciated how much the author worked to add women into the book. They aren't doing much of the actual fighting, but it is very clear how much Jaron values the women in his life and kingdom and how much they are integral to the war.

This entire series has been fairly low on romance, although it has been clear from the beginning which way it was headed (I've always approved of this direction). Though there is slightly more love story in this final installment, the low amount in this book fits in with the rest of the series. Thankfully there is still no relationship angst, though there is a fair bit of anguish. No triangle either. Jaron begins to think about love and partnership for the first time and it's a lovely part of the book, and also speaks to his growing maturity. But it doesn't overwhelm or cripple the story. I, of course, always want more romance, and wish it had been weaved more throughout the entire story. But that is not what this series has been about and The Shadow Throne continues in that vain.

The Shadow Throne is a strong end to a series that has focused on one boy's journey from a poor orphan to king of an entire country. I have enjoyed being inside of Jaron's head so much. It's definitely never a boring place to be. This series has done a good job at showing Jaron's growth throughout three books while also staying true to his character and the target audience. The Ascendence trilogy is a great fit for teen boys, even older middle school, but I enjoyed this series as an adult.