Dreams of Gods and Monsters by Laini Taylor

NOTE: Dreams of Gods and Monsters is the third book in a series, preceded by Daughter of Smoke and Bone and Days of Blood and Starlight. My review may contain spoilers for the first two installments. I'd also recommend you avoid reading this if you don't want to know anything about the finale. 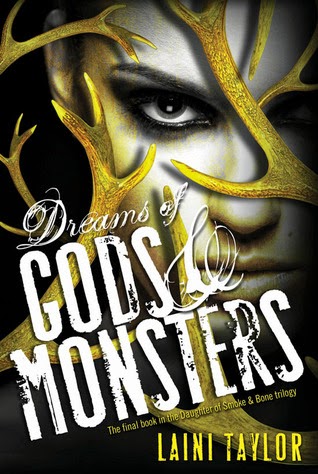 By way of a staggering deception, Karou has taken control of the chimaera rebellion and is intent on steering its course away from dead-end vengeance. The future rests on her, if there can even be a future for the chimaera in war-ravaged Eretz.
Common enemy, common cause.
When Jael's brutal seraph army trespasses into the human world, the unthinkable becomes essential, and Karou and Akiva must ally their enemy armies against the threat. It is a twisted version of their long-ago dream, and they begin to hope that it might forge a way forward for their people.
And, perhaps, for themselves. Toward a new way of living, and maybe even love.
But there are bigger threats than Jael in the offing. A vicious queen is hunting Akiva, and, in the skies of Eretz ... something is happening. Massive stains are spreading like bruises from horizon to horizon; the great winged stormhunters are gathering as if summoned, ceaselessly circling, and a deep sense of wrong pervades the world.
What power can bruise the sky?
From the streets of Rome to the caves of the Kirin and beyond, humans, chimaera and seraphim will fight, strive, love, and die in an epic theater that transcends good and evil, right and wrong, friend and enemy.
At the very barriers of space and time, what do gods and monsters dream of? And does anything else matter?
___________________________________________________________________________

I finished Dreams of Gods and Monsters with the overwhelming feeling of crushing disappointment. Perhaps my expectations were too high, but I'm devastated by this book, and upset at myself for not being able to like it more. The thing is, this is not a bad story. It contains beautiful scenes, moments of greatness, and of course, beloved characters. But so much of that was overshadowed by extras. My only explanation is that the ideas of this story got to be too big for even what this one massive page count could contain. While I’ve always loved how epic (or ambitious as my friend Heather says in her review) this series has been since the beginning, that element backfired in the conclusion.


Five ways this story faltered for me:

1)   Dreams of Gods and Monsters has way too much story in it even for its 600 page length. There were several plot threads I wanted to take out entirely (see #3 for more on this). I just could not care about all of them. I was especially disappointed in the last 15% of the book when the new stories and characters suddenly became Very Important. I’m still confused about what happened, and frustrated about the many details left open or poorly explained.

2)   The pacing of this book is wildly off balance. The narration starts prior to the end of Days of Blood and Starlight, and it takes the first 30% to get past that point. While I’m glad to have the details of the end of book 2 explained better, I was anxious about how this could end adequately based on all the different stories going (my premonition was good). Dreams of Gods and Monsters progresses at a slow and measured pace for at least the first two thirds, continually switching between numerous voices. Then all of a sudden there is an explosion of storylines out the end. There just wasn't enough room for all of them.

3)   I did not care about the new character Eliza, or the major role the Stelians played in this book. If they were to be as massive a part of the conclusion, I wish they had been introduced sooner in the series. I'm sad because I feel like I lost Brimstone and Karou and Akiva’s dream in the wake of all the new elements. I’m not saying it didn’t happen, just that that part of the story no longer had the same weight as before - or that I wanted it to have. In many ways, this book feels like the beginning of something new, instead of the culmination of the previous books. I don't mind spinoffs, and I like when a story doesn't wrap in a perfectly neat bow. But this was too much introduced too late and then left unexplained.

4)  The plot device of "plan thwarting" was used too frequently in the second half of the book. I don't want to go into too many details and spoil anything, but this happened over and over again to my increased anxiety. So much so that I began to worry that this plot would never move forward. I get that out maneuvering each other is the whole idea of war. But it was done in the same way every time, and got to be too repetitive. I'm still not over the last one.

5)   There are some wonderful gems in this book. As expected, the language is gorgeous, and I was excited to see many hoped for elements come to pass. But a lot of them were overshadowed by the extra plots, characters I couldn't care about, and a whole new story direction. Parts that I hoped would be HUGE, felt anticlimactic, while some other parts I didn’t care about took on a lot of weight in the story. Ziri, Liraz, Zuzana and Mik’s sections are shining moments. I still love Karou and Akiva. But their slowly reconnecting romance, which started out beautifully at the beginning of this third installment, was another element overshadowed by other things. This is one of the big reasons why I feel such disappointment.

After falling in love with the first two books in the series, I'm incredibly sad about my reaction to the third. I’ve also come to realize that my emotional response to a book can cloud out almost everything else. Emotionally I feel wounded by this story, because of how much it didn’t meet my expectations. However, I've seen reviews by other bloggers who had similar criticism, but still loved this (Paul wrote a particularly lovely review on Cuddlebuggery). It's all in your perspective, and unfortunately, I was unable make myself enjoy this more. So far, time and distance hasn't helped either. Still, I did buy a hard copy of this finale and would recommend the series as a whole.

If you’re freaked out by my thoughts, I do think many people will love this book. There is a lot of horror and heartbreak in these pages, but there is also a lot of hope and happy. I just wish I could shift through all the clutter and see it better.

Love Triangle Factor: None
Cliffhanger Scale: Series conclusion – but lots left open for future books. According to an  'eavesdropped' on twitter conversation: