I was excited to read two stories recently where a forced marriage actually turned into love. Often it seems that when someone tells a heroine "you must be with him," the story becomes a free will vs. destiny love triangle, where she rebells and goes after someone new.  (Clearly I've been reading the wrong books.) Inevitably when these situations arise, I end up preferring the destiny guy, though the girl always chooses the other one. Of course I'm avoiding triangles at all cost these days. But I'm very interested in exploring how a relationship that starts with "you have no choice," could actually work. I had a great time thinking about that question with these two books.

In The Hollow Kingdom and Stolen Songbird, the heroines are forcibly kidnapped (or almost), and against their wishes, end up married to mythical creatures that they previously knew nothing about. The former to a goblin and the latter to a troll. The Hollow Kingdom takes place in rural 19th century England, Stolen Songbird in a fantasy world that that seems to resemble a 19th century Britain (the characters live on an island and there is talk about the Continent). These stories share similarities in themes, but they are also quite different. I'm going to talk about them separately and together below. 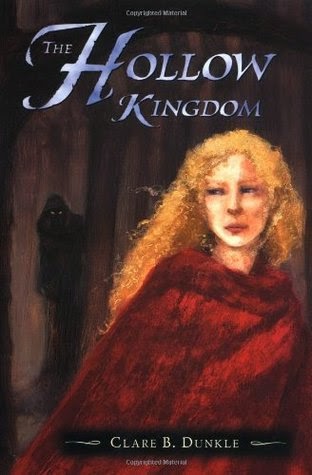 In nineteenth-century England, a powerful sorcerer and King of the Goblins chooses Kate, the elder of two orphan girls recently arrived at their ancestral home, Hallow Hill, to become his bride and queen…

"She had never screamed before, not when she overturned the rowboat and almost drowned, not even when Lightfoot bucked her off and she felt her leg break underneath her with an agonizing crunch. But now she screamed long and loud, with all her breath."
Hallow Hill has a strange and tragic history. For thousands of years, young women have been vanishing from the estate, never to be seen again. Now Kate and Emily have come to live at Hallow Hill. Brought up in a civilized age, they have no idea of the land's dreadful heritage-until, that is, Marak decides to tell them himself.
Intelligent, pleasant, and completely pitiless, Marak is a powerful magician who claims to be a king-and he has very specific plans for the two new girls who have trespassed into his kingdom.
__________________________________________________________________________

It is a goblin tradition for the king to steal a human bride. According to the current goblin king, Marak, it is also a necessity. When Kate and her sister move to their ancestral home Hallow Hill after the death of their parents, Marak picks Kate to be his wife. She is obviously not pleased with this, and does everything she can to prevent being taken by him. What follows is a Beauty and the Beast-like story, with a slow building romance, and amazing character building. Kate is fiercely determined, loyal to her sister, innocent in many ways, and also not easily duped. I liked her a lot. While reading, I waffled between wanting Kate to outwit Marak and get away from him, and wanting her to give in a little and get to know him. Marak is unapologetic about the fact that he needs Kate, and it leads to a very intriguing and uncomfortable story, which I enjoyed immensely. At least for the first half.

Unfortunately, there’s a point where this book makes a huge emotional and physical leap in these character’s relationship and the story lost me for a while. This is a Middle Grade read, which explains a lot of why the author chose not to highlight certain details, but I still wanted more. I’m all for subtle, but this was so slight that it felt more like a leap without any transition. I desperately needed more for this to work for me. The Hollow Kingdom would have been amazing as a YA or Adult book, if it was able to explore those themes, though I do think it could have managed it a bit more gracefully in this genre. Although I enjoyed seeing these two grow into a true relationship on both sides, missing the crucial transition meant that I wasn’t able to emotionally connect with them as much as I wanted. The book also ended a little too abruptly. However, as a whole this is an excellent story that does not do what is expected, in a wonderful way.

Love Triangle Factor: None
Cliffhanger Scale: None. The Hollow Kingdom is part of a companion series, but this story is complete. 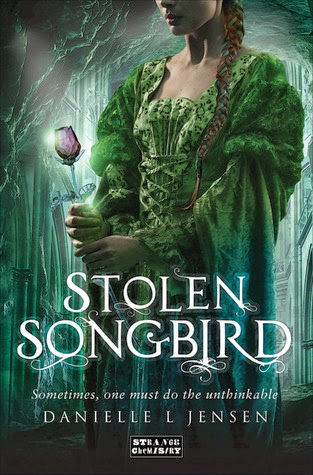 For five centuries, a witch’s curse has bound the trolls to their city beneath the ruins of Forsaken Mountain. Time enough for their dark and nefarious magic to fade from human memory and into myth. But a prophesy has been spoken of a union with the power to set the trolls free, and when Cécile de Troyes is kidnapped and taken beneath the mountain, she learns there is far more to the myth of the trolls than she could have imagined.
Cécile has only one thing on her mind after she is brought to Trollus: escape. Only the trolls are clever, fast, and inhumanly strong. She will have to bide her time, wait for the perfect opportunity.
But something unexpected happens while she’s waiting – she begins to fall for the enigmatic troll prince to whom she has been bonded and married. She begins to make friends. And she begins to see that she may be the only hope for the half-bloods – part troll, part human creatures who are slaves to the full-blooded trolls. There is a rebellion brewing. And her prince, Tristan, the future king, is its secret leader.
As Cécile becomes involved in the intricate political games of Trollus, she becomes more than a farmer’s daughter. She becomes a princess, the hope of a people, and a witch with magic powerful enough to change Trollus forever.
________________________________________________________________________

Cécile has just turned 17 and is finally going to join her mother in the city to become an opera singer. She has been brought up on a rural farm with her father and grandmother, a childhood that she’s loved, but she’s also excited for her new life to come, for which she's been preparing for years. That is until she is captured while riding alone. Cécile is taken to the city of Trollus, which exists deep under a mountain, and told that she is to be the wife of Tristan, the Prince and heir to the throne. Against her will, Cécile is bound and wed to Tristan, when all she can think of is escape. When trolls bind to each other in marriage their emotions become shared with each other. Cécile can feel everything Tristan does and he her, which is unwelcome and also very confusing.

Cécile soon learns that nothing is what it seems in Trollus, most especially her husband. As she gets caught up in court politics and tries to figure out what to do about the fact that she's stuck married to someone she doesn't know, Cecile has to figure out who she is and what she's most willing to fight for. Cécile starts off the story just going along with her mother’s plans for her life, but she has to grow up when she’s taken to Trollus and her life is altered wildly beyond her control. That is when Cécile, has to decide what she wants and believes - and where Tristan fits into that. I’m excited to see more of that path for her in book two, especially in light of the revelations she learns about herself in this book.

Although this is mostly Cécile's book, part of the narrative is told from Tristan's point of view. Tristan is very much a man of secrets and convictions, and he has no idea how to fit his new wife into his long range plans. He doesn't trust easily nor is he very open, which leads to a lot of frustration for Cécile. But it is also very clear that he can't help but care for her. I really liked how the binding of their emotions affected their relationship. It added a layer of complexity and confusion, but also eventually forced them to communicate. Even though Tristan and Cécile are clear about how they feel about each other by the end of the story, it's also clear that Tristan hasn't shared all of his secrets. I'm looking forward to the prospect of watching their relationship deepen in the future, and Tristan opening up more.

Stolen Songbird is part of a trilogy and it ends on a cliffhanger, which definitely stressed me out after the struggles Tristan and Cécile face in the book. But it is one that I think will be good of Cécile  as she continues to build up her inner strength. I'm also hoping that we get more of Tristan's narrative in the second book.

Comparing these stories
Stolen Songbird seems more coordinated in how it brings Tristan and Cecile together, where The Hollow Kingdom is decidedly messier. In the first highlighted story, Marak is the one attempting to kidnap Kate, and it makes the story deliciously uncomfortable and complex. Although Marak is described as 'pretty' for a goblin, he also has some strange features that are unsettling for humans. On the other hand, Tristan had nothing to do with Cécile's kidnapping, and he's also one of the most beautiful men Cécile has ever seen. Tristan doesn’t want the match, and Cécile learns very quickly that the antagonistic front he presents to the world is not his real face. Marak is much more what you see is what you get, and completely unrepentant about taking Kate, though it's clear she unsettles and challenges him in a way that makes her a perfect match. Still, it took me a while to feel settled about Marak and Kate as a couple. However, I didn’t struggle as much with the idea of Cécile and Tristan together, and I mostly just enjoyed the process of watching their relationship slowly evolve. Though the prospect of remaining underground forever was unpleasant in both scenarios.

Where I loved the beginning build up of Marak and Kate's relationship, I was much more satisfied with the emotional transition in Cécile and Tristan’s relationship, from disliking and mistrusting each other to love and commitment. It does pick up swiftly at one point, but Cécile struggled with many of the issues I would have, if I were suddenly married and bound against my will to someone I didn’t know. Those elements of internal struggle of becoming a wife were too subtle in Kate's story. I also read Stolen Songbird at a time where I needed a romance that was a little easier to enjoy, which is one reason why I liked the ways it differed from The Hollow Kingdom, and ended up enjoying it a little better overall. But I can also understand why some people prefer the other.