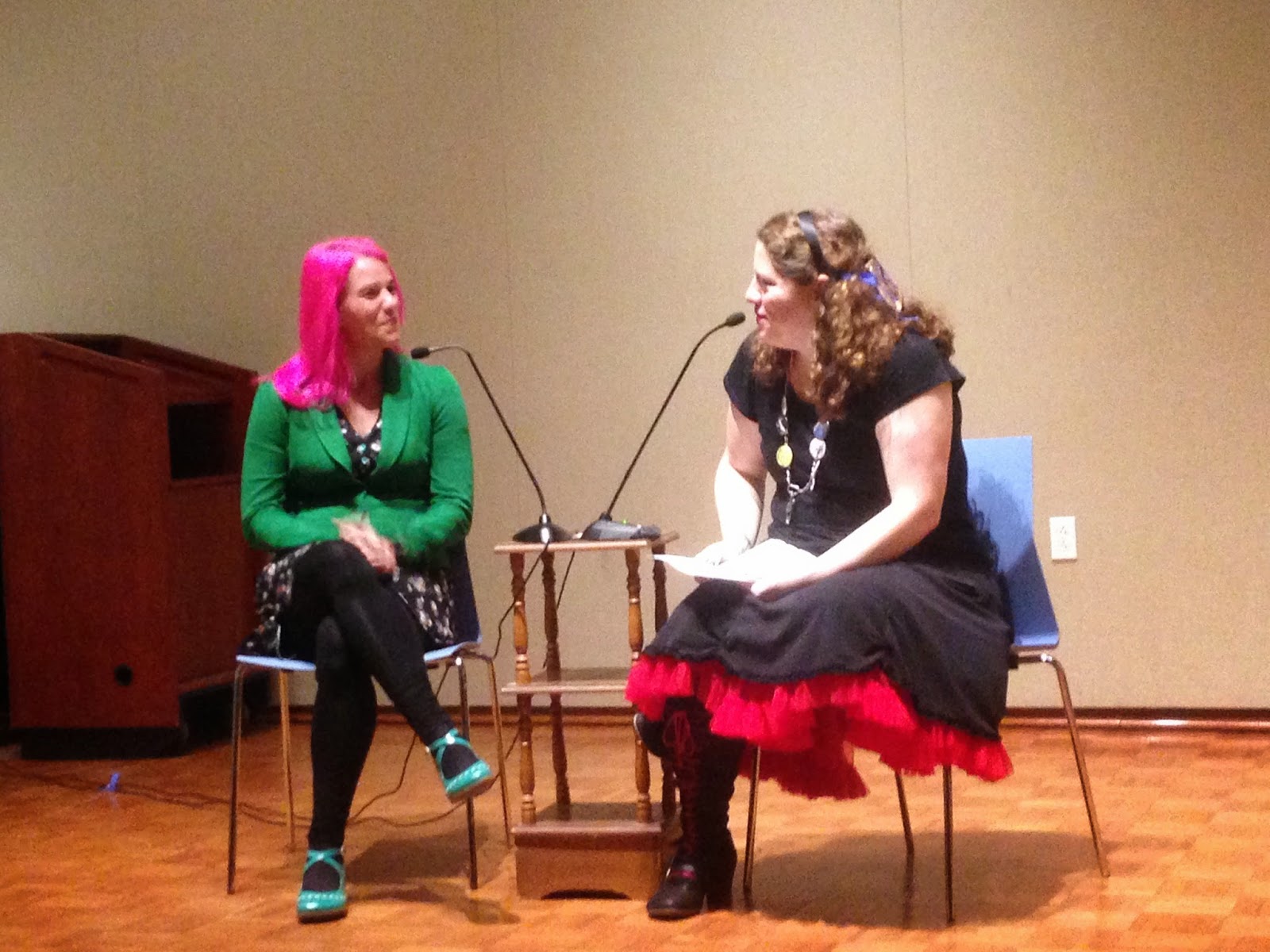 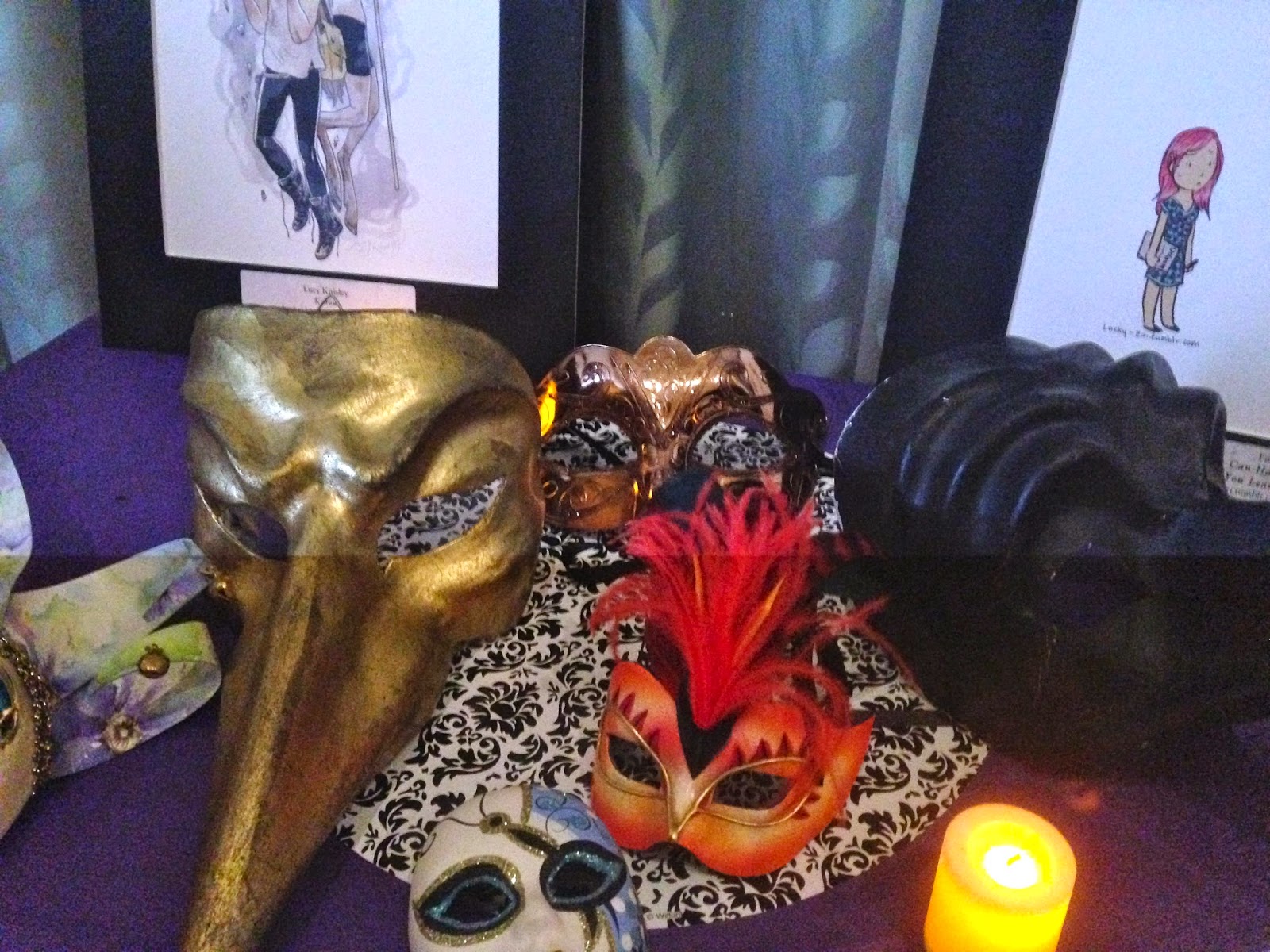 A few evenings ago I met Laini Taylor on her Dreams of Gods and Monsters tour stop at the Public Library in Brookline, Mass. It was an amazing event. Not only for the food, fan art and photo booth, but Laini was was one of the best interviews I've seen. She was enthusiastic, engaging and answered every question she was asked thoroughly and thoughtfully.

Some highlights from the talk: 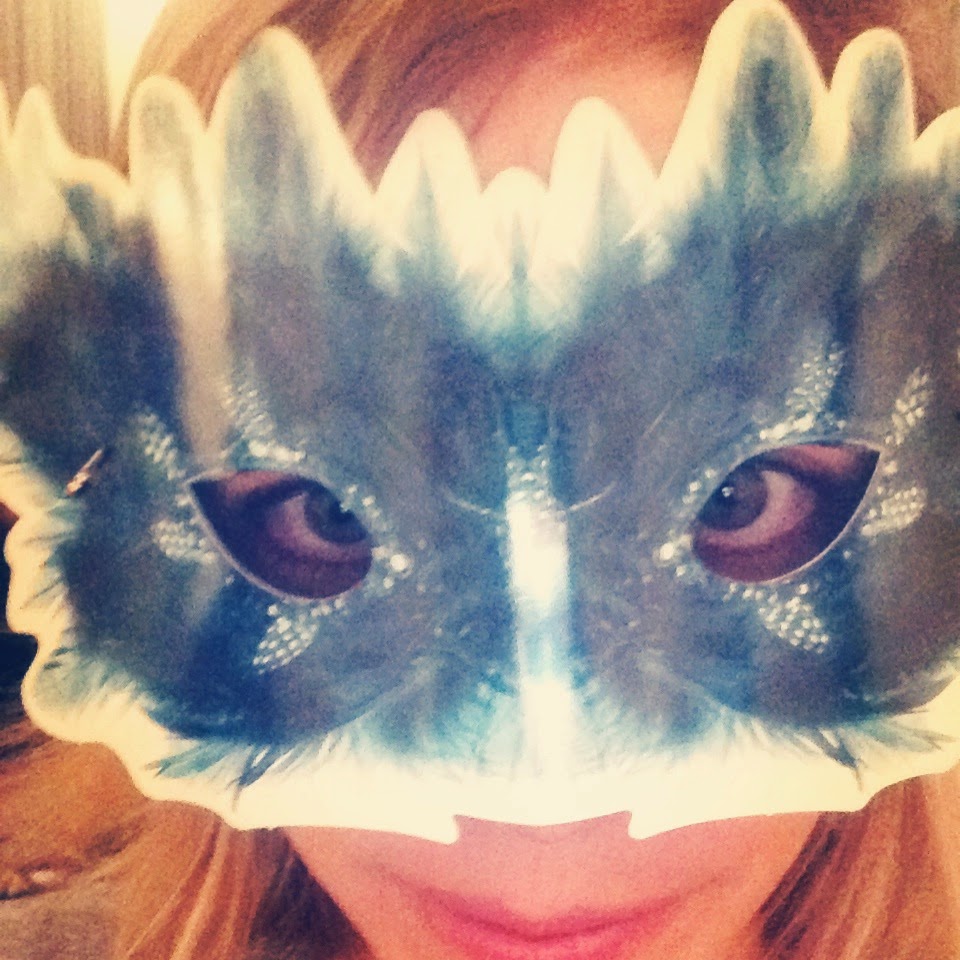 1) How and when does she write? Morning and night, around her daughter's schedule. Laini prefers silence to music and writes the most efficiently when she goes to a hotel, which she usually does when she's writing the end of a book. She wrote 20,000 words of the end of Dreams in 6 days at a hotel on the Oregon coast.

2) Book crashing: Publishers want a manuscript for a book a year in advance if possible, but both Days of Blood and Starlight and Dreams of Gods and Monsters were late, which is called "crashing the book" in the industry. She finished writing Dreams right before Christmas and then edits came quickly after. After taking a bit of a break, she's starting to write again.

3) What aspects make up her chimera? The Kirin chimera pretty much equals Laini's magical wish fulfillment. And bat wings.

4) What is she working on now? A short story for an anthology for Stephanie Perkins called My True Love Gave to Me, filled with romantic holiday stories. Laini's story starts with plague orphans - but she promises it gets romantic. She's also beginning to write an idea she has for a science fiction novel set in historical New York.


5) Daughter of Smoke and Bone was written by cheating on another book. Laini was writing another sci-fi story that wasn't working. She gave herself one day to write whatever she wanted and Karou and Brimstone came alive from that. She sold her story based on the first third of the novel.

5) Did she plan her series out in advance? Laini says her stories are character driven, and outlines don't work for her. When writing the first book, she knew the ultimate end of Daughter, but not beyond that. She builds her stories by creating situations and putting characters in them, often writing the same scene multiple ways before it's right. She never thought she could write this way because of her struggles with perfectionism but has found that she actually loves it in practice. 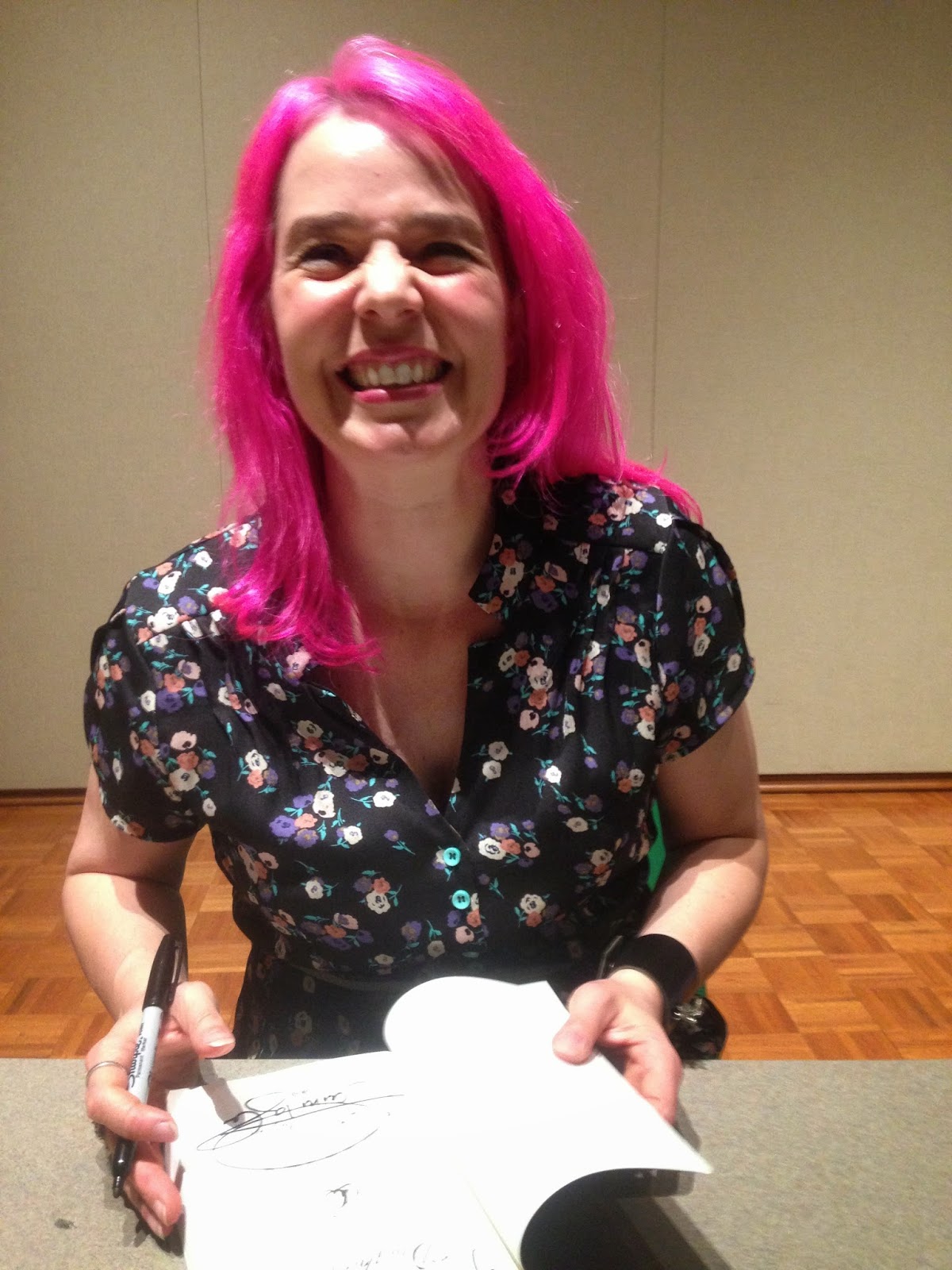 6) Hair: Laini's hair's been pink for 7 years. She says it makes her easily noticed when she wants to be found, but it's impossible to sneak out of a boring conference session.

7) How did she come up with her characters' names? Naming characters is something Laini loves to do, and she does try to make them fit together. For instance she used Hebrew names for the Seraph In fact, she enjoys exploring the idea "what if everything came out of something else?" Like what if the Hebrew names were originally from the Seraph?  Also, sometimes she chooses a not well known county and looks at village names, because they are names that have stood through time but are also obscure.

9) Will she write more stories from this world in the future? Not now. She needs to step away from this world and explore other things first, but it is definitely a possibility.


10) What is her research process? Places Laini wants to visit are also featured locations in her books. She visited Prague with her husband Jim originally for another book which was never written, but she used the material for Daughter. Morocco was chosen as a setting because of her desire to visit. Laini used guide books to write the Moroccan scenes in Daughter. Then she visited before writing Days and ended up using the southern region with its Kazbahs as the setting for the second book.

11) Because she didn't plan her series in advance, in hindsight, does she wish she'd set anything up differently? Little things but nothing major. She doesn't world build ahead of time, and waits until she needs to know something before she starts to write it. In this way she lets the story direct the world building. Laini says she considers writing to be like beach combing. Every day she finds something different, and if she'd written a scene another day, it might have turned out differently.

12) Are there any characters that jumped out more after she started writing them? Eliza. Laini knew she wanted to experience the event at the end of Days through the eyes of a human and a scientist. But last summer when she was trying to get the story to come together, Eliza ended up taking on a much bigger role.

13) What is happening with the movie process for Daughter? Laini is an executive producer on the movie and feels lucky to have ultimate screen play approval. Though she hasn't altered anything major in the screenplay, she was able to polish the first edits on the screenplay that was written. From that they hired a director and went to Universal. She doesn't have any casting info, and will likely not be involved in that process.


14) Are there any mythology/elements she wanted to incorporate in this story but couldn't? She wanted more Zuz/Mik in Daughter but it didn't fit. That's why she wrote the novella Night of Cake and Puppets for them later. She would also love to see more of the end of Dream come to life, and explore what happened to the other six Seraph. But she doesn't have any immediate plans to do that.

15) On the scope of the last book: Laini didn't want the final book to be all about Jael. She wanted it to be a bigger story. Because of that she knew she wasn't going to tie the story with a bow, but could finish the original elements. 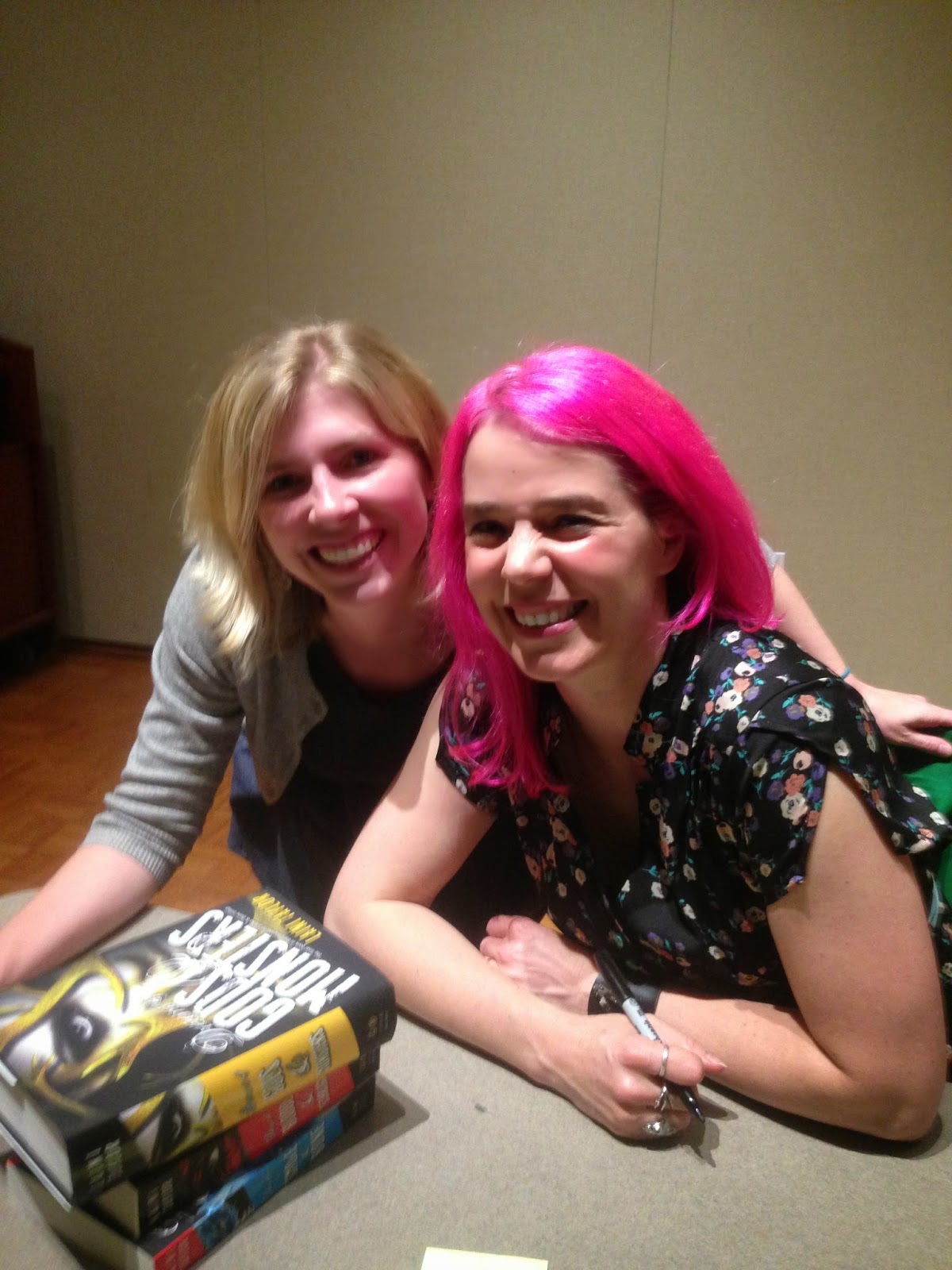 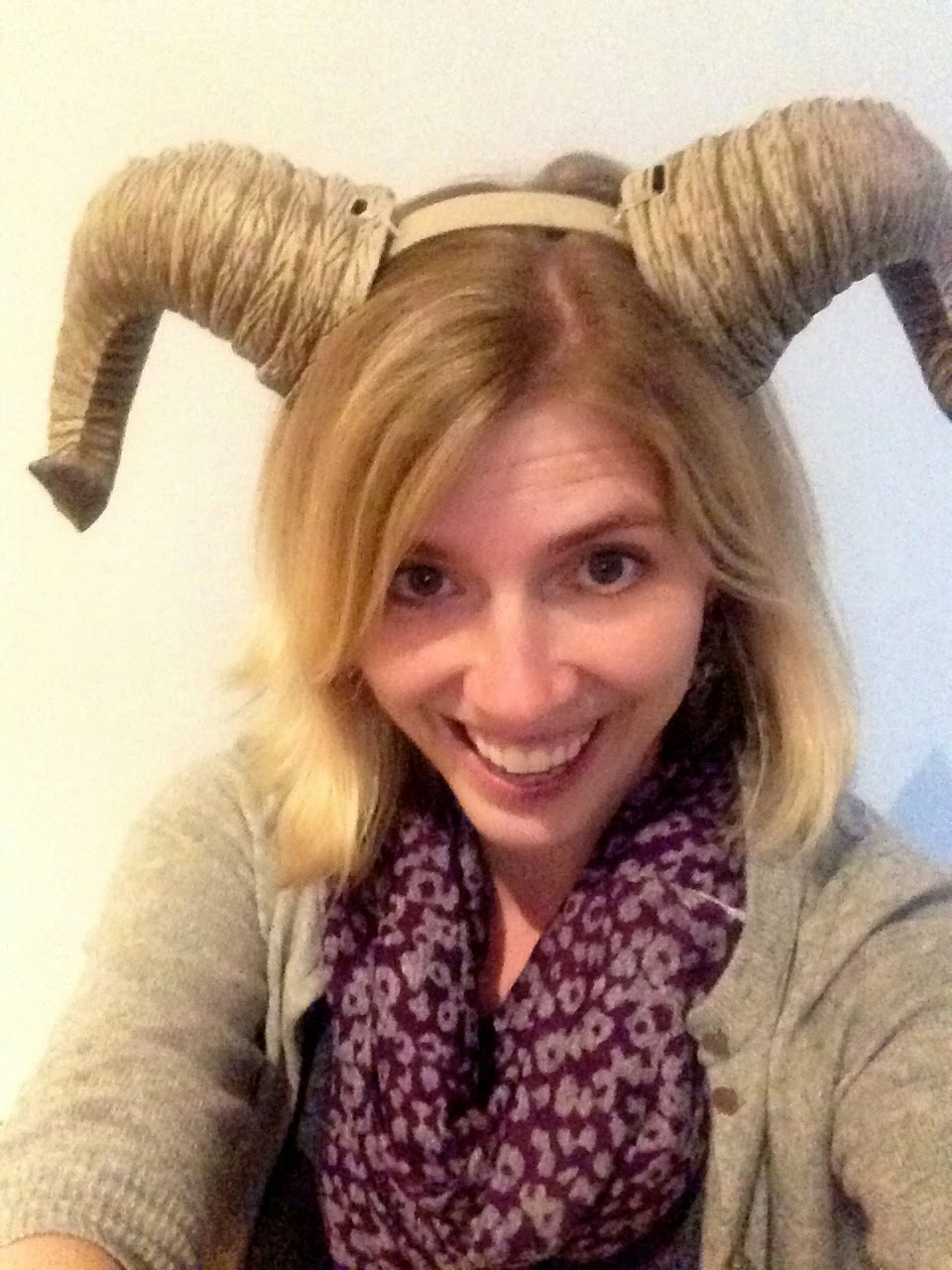 Laini's hair is casting a magical pink glow on my face.
I think I could rock ram horns.

* Click through for more information on the artists and better images of the artwork.
Posted by Lauren @ Love is not a triangle at 12:00 AM