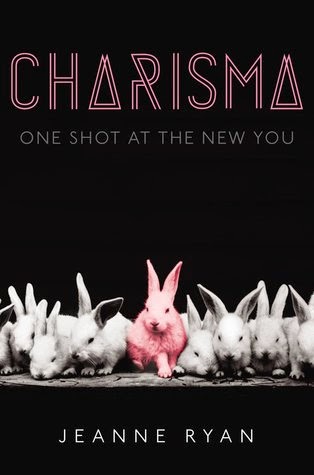 A chance at the ultimate makeover means deadly consequences in this Sarah Dessen-meets-Robin Cook thrillerAislyn suffers from crippling shyness—that is, until she’s offered a dose of Charisma, an underground gene therapy drug guaranteed to make her shine. The effects are instant. She’s charming, vivacious, and popular. But strangely, so are some other kids she knows. The media goes into a frenzy when the disease turns contagious, and then deadly, and the doctor who gave it to them disappears. Aislyn must find a way to stop it, before it's too late.Part medical thriller, part social justice commentary, Charisma will have readers on the edge of their seats.
________________________________________________________________________

My Thoughts on Charisma

Set-up
Aislyn suffers from crippling shyness and social anxiety. Speaking in public paralyzes her, parties are a nightmare and even going through her regular day leaves her a mess of nerves. Aislyn wishes desperately that she could just speak up for herself, or even have a regular conversation with Jack, the cute guy from her class who's started noticing her, but those seemingly simple tasks are nearly impossible for Aislyn to manage.

Aislyn's spent her semester researching a science fair project with  Nova Genetics, a company working on gene therapy treatments for diseases like cystic fibrosis, which Aislyn's own brother Sammy has. When the doctor Aislyn's been working with offers her an experimental gene therapy called Charisma that's supposed to give her a personality boost and get rid of internal anxieties, Aislyn is hesitant but quickly decides to go for it. Almost immediately Aislyn can feel the changes: she's less inhibited, enjoys being the center of attention at a party and starts hanging out more with Jack. But Aislyn soon learns that the treatment comes with nasty side effects - fainting, ear ringing, comas and even death - and that it's spreading, while the doctor involved is getting harder and harder to reach.

Breakdown
To be honest, I didn't relate very well to Aislyn at the beginning of the book. I've never struggled with speaking up for myself or been nervous in public situations. However, I do know that it's absolutely a real condition and that Aislyn is not alone in her fears and struggles. I also think Aislyn was pretty crazy for taking a mystery drug from a doctor who told her that she couldn't tell anyone about what she had taken (red flag!). But I can understand being a teen who is desperate to stand out a little bit in the world, and not suffer so much as a result. If someone in authority that I trusted and admired, told me they could fix me quickly, I could imagine being tempted by that.

As expected, there are consequences for Aislyn's decision, and we get to see all of them play out in her life and the lives of others who took the same treatment. These characters face social stigma, media attention, loud public opinion, both good, negative and creepy, as well as physical side effects and even death. It is intense, and I became riveted to the story as it all unfolded. Like I was a spectator to a situation that began secretly but ended up a public spectacle. I couldn't look away, even as the situation got more and more dire.

Although Aislyn alters herself at first via a treatment. I enjoyed watching her find and maintain her voice through the madness, and learn to speak up - and act for herself when necessary. Aislyn has to figure out how much of these changes she's going to claim for her own. But also how to live with and within the consequences of her actions.

This book was very message focused on the dangers of gene therapy and sketchy drug trials, but it's also very clear to point out their benefits. Or at least their potential for curing or lessening the affects of incurable diseases like cystic fibrosis, or even cancer and AIDS one day. I didn't really understand all of the science of what was going on, and I'm pretty certain that a therapy like Charisma is impossible - or at least not something that is probable anytime soon. But the idea of it was frightening, and also I could see how it could be very appealing, like steroids or other treatments that "enhance" a person. I can also see how a therapy like this could explode into a national health crisis, which author Jeanne Ryan did an excellent job outlining.

A sweet romance is an underlying plot in the story, and it helped to ease some of the tension in the story. I also very much enjoyed Aislyn's friendship with Shane, which started off antagonistically at first but turned into a mutual bond of two people supporting each other through the same situations. However, I was very happy to see that there wasn't any love triangle, and Jack was pretty adorable and very supportive.

How much of the concepts in Charisma are real - or even possible?
(A fact vs. fiction discussion)
by Jeanne Ryan

First things first, confession time: I dropped out of tenth-grade biology and only barely partook in any lab science classes beyond that. Fortunately, I plowed through a lot of research methodology in grad school, so I can usually separate well-done studies from hacks. This was enough for me to get excited about the real potential of gene therapy when I ran across an article about it.

But before I could write about this complex approach, I needed to go back to the basics and make sure I understood it. This meant spending time on the same website my kids often turn to for homework help: Khan Academy. I studied DNA, genetics, and other related topics before graduating to specific gene therapy information. I also made real world visits to the medical and research libraries at the University of Washington to collect journal articles, and I found a few books on the subject that were actually understandable to a civilian like me. I was even able to meet a scientist who worked on a treatment for a type of congenital blindness. (After all my research, chatting with her was a fan-girl moment.)

So, is gene therapy fact or fiction? Well, it’s fact, but presently in limited operation, because of how complicated and costly it is. However, there have been successes in curing certain types of blindness (as mentioned above) and treating “bubble boy” disease among other disorders. Many additional gene therapies are under study, with the hope of treating big diseases such as cancer and AIDS one day. Although the current mission of gene therapy is targeted toward curing disease, folks have already tried to use genetic modification as an enhancement, for example the “gene doping” used in sports to enhance athleticism.

But, as far as I know, a gene therapy treatment of personality issues is fiction at this time. For one thing, personality is incredibly complex, involving many variables of both the nature and nurture varieties. Even so, I tried to create a scenario that was at least theoretically possible. For example, it would’ve been a really hard sell to convince a character to agree to an injection directly to her brain tissue, so I searched the literature for a viral vector that could transport modified genes via the bloodstream through the blood-brain barrier. As it turns out, scientists have been developing a virus for just this purpose with the hope of using it to treat diseases such as Parkinson’s.

Despite my best efforts, I’m sure there will be folks in the medical or scientific fields who find things to critique in my book. But since this is a novel not a text, my goal is for the science to feel authentic enough to propel the story without bogging it down in technical detail. Hopefully, I’ve found a working balance.


I’ve lived all over the world, raised in a family with eleven brothers and sisters. I spent my early childhood in Hawaii and the rest of my growing-up years trying to figure out a way to get back there, with stops in South Korea, Michigan and Germany along the way. Before writing fiction, I tried my hand at many things, including war game simulation and youth development research. But I decided it was much more fun to work on stories than statistics.

These days, I still love Hawaii, but have found my home under the moody skies of the Pacific Northwest.

Win a finished copy of Charisma