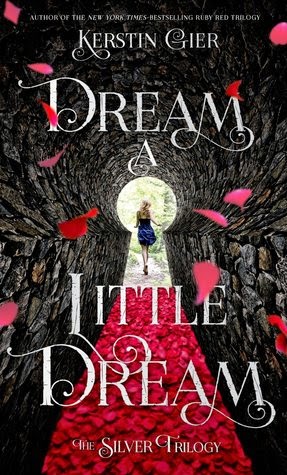 Mysterious doors with lizard-head knobs. Talking stone statues. A crazy girl with a hatchet. Yep, Liv’s dreams have been pretty weird lately. Especially this one where she’s in a graveyard at night, watching four boys perform dark magic rituals.
The really weird thing is that Liv recognizes the boys in her dream. They’re classmates from her new school in London, the school where’s she’s starting over because her mom has moved them to a new country (again). But they seem to know things about her in real life that they couldn’t possibly know, which is mystifying. Then again, Liv could never resist a good mystery. . . .
_______________________________________________________________________

As expected, Dream a Little Dream was delightful. Author Kerstin Gier is the master at combining amusing heroines with clever, twisty plots that somehow manage to be fun and also surprising.

I wish that Liv was my friend in high school. She is both hilarious and intelligent, and it was endearing and fun to live inside her head for a while. When the book begins, Liv and her sister have just moved to London with their mother, who has just gotten a job as a professor at Oxford. They thought they were going to be living in a cute country cottage, but instead they're in the city meeting their mom's new boyfriend and attending a posh private school. Not at all what they expected, but after constantly moving with one or the other of her divorced parents, Liv is nothing if adaptable. She's 15 when the book begins and turns 16 during the story. That's a little younger than I prefer in YA, but Liv's age worked well for her voice, and the fact that people are constantly underestimating her.

On her first day at school, Liv encounters four blond boys - Arthur, Jasper, Grayson and Henry. One of whom is likely to become a stepbrother, and another a love interest for Liv. Although it is a little strange that all four boys and Liv have the same colored hair, it's also fairly amusing (ironic?). All four boys are also involved in a secret club of sorts that involves visiting each other's dreams. I really liked the dreams element of the story. Figuring it all out was one of my favorite parts of reading this book. I am quite intrigued by the whole concept, and can't wait for more. I was surprised by the turn of events near the end of the story, and didn't see some of the dangers coming.

There is one thing that bugged me in the story, but it's slightly spoilery so I'm going to hide it. Also, it's more of a personal preference thing than a huge issue.

No love triangle, and I'm crossing my fingers there won't be one. The romance is sweet but the guy in question has a lot of secrets, which makes me nervous. However, knowing Gier, that's all part of her plan.

Like with Gier's last series, I'm regretting the fact that I don't know German and can't obtain the next installment immediately! A note on the translation: This book is translated from German, and while it doesn't have the same overuse of exclamation points that the Ruby Red series did, there's definite confusion about Liv's school year. Actually, about the whole education system in the book. Liv attends a posh private school in London. She's 15 when the story begins but turns 16 a few weeks into the school year. The book mentions that she's in "class eleven," but she's not in the "upper school," she's a "middle-school girl." It doesn't seem to equate to the German or English system. Despite the strange language, it's clear that Liv is in high school. My guess is that she's a sophomore (grade 10) and the "upper school" comprises the junior and senior classes. But it's not clear. Hoping that is changed in the final version. (It's funny how something small like that can really throw off one's reading experience - or at least mine!)

Love Triangle Factor: None
Cliffhanger Scale: Low/Medium - Book doesn't end at a high stress moment, but Gier carefully weaves her series together, so we know there's more to come.