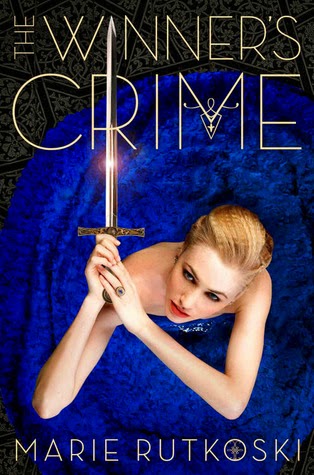 Book description: Following your heart can be a crime

A royal wedding is what most girls dream about. It means one celebration after another: balls, fireworks, and revelry until dawn. But to Kestrel it means living in a cage of her own making. As the wedding approaches, she aches to tell Arin the truth about her engagement: that she agreed to marry the crown prince in exchange for Arin's freedom. But can Kestrel trust Arin? Can she even trust herself? For Kestrel is becoming very good at deception. She's working as a spy in the court. If caught, she'll be exposed as a traitor to her country. Yet she can't help searching for a way to change her ruthless world . . . and she is close to uncovering a shocking secret.

This dazzling follow-up to The Winner's Curse reveals the high price of dangerous lies and untrustworthy alliances. The truth will come out, and when it does, Kestrel and Arin will learn just how much their crimes will cost them.

Today, I'm thrilled that author Marie Rutkoski is stopping by for a chat.
Welcome back to Love is not a triangle, Marie!

LAUREN: When we met last, we talked about Kestrel and Arin’s identities as were-beasts. According to you, Kestrel would be “a Kestrel of course,” and Arin would be a “lean, sexy, tiger,” the preceding adjectives being an important part of Arin’s animal nature (If he were to have one). What I want to know is what animal forms some of the other characters in the sequel would take, especially, The Emperor, Verex, Tensen and Jess?

MARIE: The emperor: a mink. They’re nasty. Have you read Tana French’s Broken Harbor? The animal believed to be living in the house is maybe a mink. OR SOMETHING WORSE.

Verex: The very best kind of loyal and loving dog.

Tensen: A friendly yet cunning monkey.

LAUREN: It’s well documented that Kestrel and Arin love games. There are also points in their stories where like it or not, they’ve had to fight for their own or others’ survival. I want to know how you think each would do in the ultimate survival game: the Hunger Games. If Arin and Kestrel were somehow transported to Panem and Reaped into the games, how would they do? Who would last the longest? Do you think either of them could win?

MARIE: The only way to answer this is to pretend that Kestrel and Arin don’t and won’t know each other in these games, because otherwise they’d probably try to ensure the other’s survival.

Kestrel would win. Strategy counts for a lot in the Hunger Games, and she can usually keep her head. Arin would get far, but he’d find the whole situation so intolerable that he’d make a mistake, he’d let his emotions get the best of him, or he would do something both noble and dangerous.

LAUREN: Let’s go crazy for a minute and pretend that that you, I, Kestrel and Arin are hanging out together, and we decide to play a game of “Would You Rather.” This might be hard for those two, because there’s no right or wrong answer in this game. Though maybe they’d argue that there is one.

How would you and they answer the following questions:

A) Would you rather wear the same outfit every day for the rest of your life OR eat the same meal?

B) Would you rather always have to say everything on your mind OR never speak again?

C) Would you rather fail or never try?

D) Would you rather always laugh at sad things OR always cry at funny things?

(laughing at sad things seems too cruel, and I frequently cry when something is hilarious—they are happy tears. I think Kestrel and Arin would feel like I do)

LAUREN: If Kestrel and Arin went to a job interview and were asked the classic “name one of your strengths and one of your weaknesses” question, how would they answer for themselves? Would that answer change between the beginning and end of The Winner’s Crime?

At the beginning of the book?

KESTREL: Strength - Determination
Weakness - I worry that I will never be the person I want to be.

ARIN: Strength - Survival
Weakness - Sometimes I let loneliness rule my decisions. Also, I want what I can’t have. I wonder whether I do this deliberately to punish myself.

LAUREN: As you know, some of us have started a support group for those who have finished The Winner's Crime. We’re pretty sure that anyone who finishes the book is automatically going to want to join. Does it fill you with glee to cause us inner pain? Just kidding! But seriously, if you were going to attend one of our hypothetical meetings, what words of advice or comfort would you offer your readers? Anything you can tell us that might ease our pain a little bit? Or are you more of a tough love kind of person?

MARIE: Probably if you got me alone and in person I’d spill lots of secrets, because I’m not a good secret-keeper (as you yourself know). But it’s easy for me to use tough love online, so I’ll just say that you’re going to have to decide whether you trust me or not. How far would I go with these characters?

But I’m really not gleeful about causing unhappiness in readers. When I finished writing Crime I was (really, still am) worried that it’s going to be too dark for some people, and I care about my characters. I don’t want to hurt them. On the other hand, their natures drive their decisions, and their decisions have consequences….sometimes writing a book is like chess. Once you move a piece (or character) into a position based on the kind of movement they can make (the one that fits their nature, like how a knight piece can only move in the shape of an L), only certain scenarios can unfold before you. That is the plot.

Of course, characters aren’t chess pieces. Their movements (their nature) change. One of the exciting things about writing The Winner’s Kiss is seeing how Kestrel and Arin change. They’re not the same people we saw in Curse or Crime. I’ll let you decide whether this worries or comforts you.

That settles it. I'm going to have to get you alone again and ask some more questions…that wasn't meant to be as creepy as it sounded. Or was it?!

Marie Rutkoski is the author of The Winner's Curse, The Shadow Society, and the Kronos Chronicles, which includes The Cabinet of Wonders. She is a professor at Brooklyn College and lives in New York City. Find her at marierutkoski.com and @marierutkoski

Win a finished hardback copy of The Winner's Crime