DNF: A Court of Thorns and Roses by Sarah J. Maas 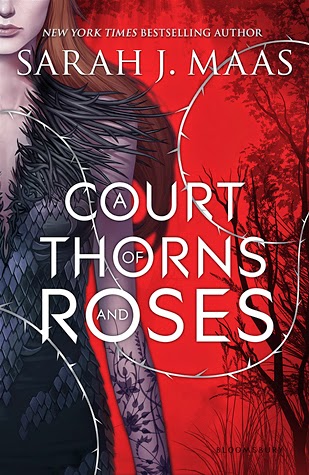 A thrilling, seductive new series from New York Timesbestselling author Sarah J. Maas, blending Beauty and the Beast with faerie lore.
When nineteen-year-old huntress Feyre kills a wolf in the woods, a beast-like creature arrives to demand retribution for it. Dragged to a treacherous magical land she only knows about from legends, Feyre discovers that her captor is not an animal, but Tamlin—one of the lethal, immortal faeries who once ruled their world.
As she dwells on his estate, her feelings for Tamlin transform from icy hostility into a fiery passion that burns through every lie and warning she's been told about the beautiful, dangerous world of the Fae. But an ancient, wicked shadow grows over the faerie lands, and Feyre must find a way to stop it . . . or doom Tamlin—and his world—forever.
Perfect for fans of Kristin Cashore and George R. R. Martin, this first book in a sexy and action-packed new series is impossible to put down!
_____________________________________________________________________________

To my deep disappointment, I'm going to be the lonely black sheep on this book. I've made it to 50%, and I am not sure if I can continue reading without increasing frustration. If I'm not able to get into a story by this point, I usually don't have any hope. As of now I'm marking A Court of Thorns and Roses DNF, which hurts a lot, because I wanted to love it. But alas, it wasn't meant to be :(. Some specific notes:1) The first half of this book reads very much like a Beauty and the Beast retelling, and like many of them, the pacing is slow. I LOVE Beauty and the Beast, which is another reason I've been so sad that this hasn't been working for me. The slowness isn't often an issue for me, but that compounded by the fact that I struggled all along to connect to these characters, made it hard for me to get through the first half of the book. 2) In the place of Belle we have Feyre, and though I can see objectively why readers like her character, I've not been able to connect with her at all. She's read very much like the a typical New Adult heroine, exactly the type I actively avoid. And one reason I stay away from NA these days. I tried to change my feelings towards her, but I never quite managed it. Although her character does make sense for the life she's faced - past traumas and holding together her useless family entirely by herself - she reads like a type to me, stubborn, closed off, unwilling to accept any help or advice or to listen to anyone. She also spent much of the first half overly obsessed with a promise she made to her dying mother to protect her father and sisters, and it was hard for me to understand her continued commitment to her useless family (thankfully, her focus on that does lessen by mid book). I really wanted to like Feyre, but I don't think I can keep reading without that happening. 3) Tamlin was growly and demanding, as well as frustrating in his refusal to reveal clear information to Feyre, but still, I was intrigued by him through most of the first half. However, a big faery event happens around the midpoint, which I think is supposed to be the turning point in his relationship with Feyre - (spoiler) it's a moment when Feyre and Tamlin acknowledge their feelings for each other, it's also supposed to be a really sexy scene (end spoiler) -  but instead, the whole thing made me uncomfortable and completely creeped out. On several levels, it just isn't the type of thing that works for me At All. I was starting to really like Tamlin before that but after it, I'm just not feeling this romance any more. The more I think about this part, the less I like it. But I realize I'm way way in the minority on that feeling.
4) Many people who have already read this book have warned me about the second half, including the introduction of another guy. Some have warned me about the possibility of a love triangle to come in future books. Others say no way to the triangle, and all of that is playing on my nerves. I really need to feel confident in my feelings about Feyre and her relationship with Tamlin to continue to enjoy the story. That isn't happening thus far. I'm not sure I could deal with the uncertainty of a looming triangle on top of struggling to connect to the MC and the main romance. I will admit to reading the end of the book, and while some things about it made me feel better, other aspects greatly worried me. 5) I've tried to step away from this story for a while and see if I could go back into it refreshed, but so far, I can't read more than a page or two without needing to put it down again. All that is to say: at this point I'm going to put this book on hold until the next one is released. I need to get a better sense of where the romance and storyline is going before diving back in again. If it doesn't delve into triangle territory, I might try to start over from the beginning and see if I can connect in better to it.I'm usually not this upset about DNFing or not liking a story, but I really, really am with this one! I've been feeling terrible about it for a few weeks now. It seems like something I should love and I know that many do, but I'm thinking that this book and this author may not be for me, sadly. I'm hugely grateful to Bloomsbury for giving me an opportunity to read this galley. THANK YOU!

Love Triangle Factor: Main romance has just started up by this point. Undecided on future of it. From what I've read there's at least a 50/50 chance of a love triangle happening.
Cliffhanger Scale: Book one of three. I did read the end, and it was fairly settled, though with two more books to come, that doesn't mean much.

For those of you Maas fans out there, I'd love to know if you think I should still give the Throne of Glass series a shot? Am I going to like it more than this?