Today I'm thrilled to have Anna Banks sharing her favorite quotes from her upcoming contemporary YA release. 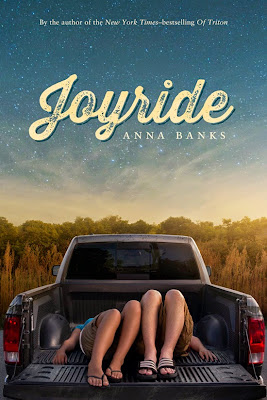 A popular guy and a shy girl with a secret become unlikely accomplices for midnight pranking, and are soon in over their heads—with the law and with each other—in this sparkling standalone from NYT-bestselling author Anna Banks.
It’s been years since Carly Vega’s parents were deported. She lives with her brother, studies hard, and works at a convenience store to contribute to getting her parents back from Mexico.
Arden Moss used to be the star quarterback at school. He dated popular blondes and had fun with his older sister, Amber. But now Amber’s dead, and Arden blames his father, the town sheriff who wouldn’t acknowledge Amber's mental illness. Arden refuses to fulfill whatever his conservative father expects.
All Carly wants is to stay under the radar and do what her family expects. All Arden wants is to NOT do what his family expects. When their paths cross, they each realize they’ve been living according to others. Carly and Arden’s journey toward their true hearts—and one another—is funny, romantic, and sometimes harsh.
_________________________________________________________________

You might say JOYRIDE was a joy to write. Not trying to sound conceited, but I really cracked myself up with this one, and what’s more, it pulled on my heart strings in a lot of ways. Here are some of my favorite quotes from the book; if you’ve read JOYRIDE and your faves aren’t mentioned here, feel free to share them below!

His green eyes, his honey-colored hair, the way his biceps bulge without flexing. He’s mesmerizing. And I don’t have time for mesmerizing.

In the second it takes for me to nod, his lips are on mine. Gentle at first, as if tasting me, as if determining whether or not this is the right thing to do. It doesn’t take him long to decide. I feel the second our friendship ends and something else starts.

They pull into the Uppity Rooster Café and Arden revs the truck engine to let Carly know they’ve arrived. This earns a disapproving look from Uncle Cletus. “Is that supposed to be some sort of mating call, boy?”

He’s gone to a lot of trouble on my behalf. This boy who has pulled a gun on me, scared my friend half to death, stolen my bike (twice), insulted me in front of practically the entire school (accounting for gossip), and held me hostage for one-point-five minutes.

“So, the point of mudding is to get your truck stuck?”
“We’re not stuck. And point? There’s no point to mudding. It’s just fun.”
But by the tone of his voice, it doesn’t sound like he’s having fun. It sounds like he might be a bit frustrated. Which is why I shouldn’t say, “It’s like the road took a crap on us.” But I do.

“You little Robin Hood, you.”
He grins. “Does that make you Maid Marian?”
“I think I qualify more as Will Scarlet, don’t you?”
“A cute, high-strung Will Scarlet?”
“You mean like your mom?”
“Really? You told a mom joke?”

I’m like a sponge teeming with oil; I can’t absorb what happened. I can’t accept that Arden and I are never going to speak to each other again.

I live with my husband and daughter in the Florida Panhandle. I have a southern accent compared to New Yorkers, and I enjoy food cooked with real fat. I can’t walk in high heels, but I’m very good at holding still in them. If you put chocolate in front of me, you must not have wanted it in the first place. 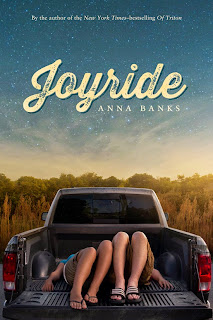 Win a finished copy of Joyride

Policies
Giveaway is for US or Canada residents only (Sorry, other international readers!)
You must be at least 13 years old to enter
See my policies HERE