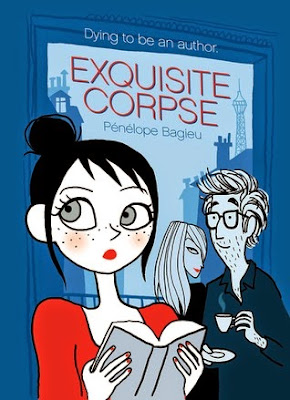 I have a confession to make: this is the first graphic novel that I've ever read in full. Before I started it, I was worried about getting into the flow of a story that combines pictures with words, instead of just one of those. But after a few pages I was completely absorbed, and the story began to come to life. Kind of like when I watch a foreign movie with subtitles and forget later that I read the words instead of hearing the actors say them. I love that I didn't need long descriptions or dialogue to get into the book and understand what was happening.

Exquisite Corpse is the story of Zoe who is working a dead end job and has a loser boyfriend that she keeps thinking of leaving, but can't seem to quite make it happen. One day she randomly ends up in the apartment of a guy who turns out to be a famous author...who's supposed to be dead. Of course Zoe doesn't know anything about Thomas Rocher or his "death," because she doesn't do much reading. (She's never been into a bookstore, WHAT? Poor girl!). Zoe unwittingly gets caught up in a book selling scheme being carried out by Rocher and his ex-wife Agathe. She's in way over her head and nobody will guess how she'll get herself out of the situation.

Zoe and I do not have much in common at all, but I like her laid back approach to life, and I think everyone has moments where they get stuck and feel paralyzed to change their situations. I could definitely feel how much Zoe was weighted down by that as I was reading, and I was excited when she began to get out of her rut and started to take charge of her life.  I also enjoyed that she saw things very differently from Rocher and Agathe, and I was cheering her on when she got angry and told them exactly what she thought of their plan.

This was a great first graphic novel. It's not super long, and I was able to absorb it in one sitting. The images were clear but also a little gritty. This is not a YA book, by the way. The heroine is 22 and the themes and pictures are more adult focused. I don't have a lot of books to compare this one with, but I like the way author Pénélope Bagieu's art matched her honest storytelling, and especially that she threw some unexpected twists into it. The ending is especially hilarious.

After such a positive graphic novel reading experience, I'm excited to try out more of these books. What are your favorites?

Pénélope Bagieu was born in Paris in 1982, to Corsican and Basque parents. She is a bestselling graphic novel author and her editorial illustrations have appeared all over the French media. She blogs, drums in a rock band, and watches lots of nature shows. 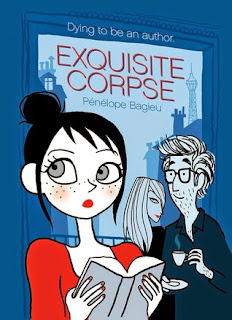 Policies
Giveaway is for US or Canada residents only (Sorry, other international readers!)
You must be at least 13 years old to enter