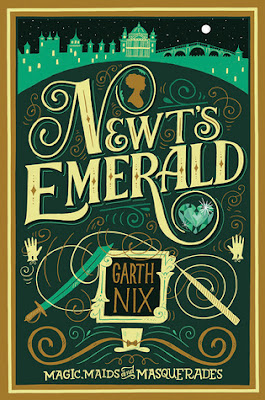 Lady Truthful will inherit her family’s most valued heirloom on her eighteenth birthday. Until the Newington Emerald is stolen.
Lady Truthful, nicknamed “Newt” by her boy cousins, discovers that to her horror, the people closest to her have been framed for the theft. But Newt won’t let their reputations be damaged by rumors from a false accusation. Her plan is simple: go to London to recover the missing jewel. Despite her best intentions, a young lady travelling alone is frankly unacceptable behavior. So Newt and her aunt devise another plan…one that entails men’s clothing and a mustache.
While in disguise, Truthful encounters the handsome but shrewd major Harnett, who to her amazement volunteers to help find the missing emerald under the assumption that she is a man, Henri de Vienne. But once she and her unsuspecting ally are caught up in a dangerous adventure, Truthful realizes something else is afoot: the beating of her heart.
Truthful has far more than romantic complications to worry about. The stolen emerald is no ordinary heirloom-it is the source of the family’s luck and has the power to yield vast magic. It would be completely disastrous if it fell into the wrong hands. The fate of England depends on Truthful securing the emerald.
_________________________________________________________________________

After reading two long middle-in-a-trilogy books in row I needed something lighter and quicker and that's exactly what I got with Newt's Emerald. This book is a little bit silly and a whole lot of delightful fun. Plus as a huge fan of regency romance, it was a wonderful nod to a favorite genres. Along with the mystery of a lost emerald, are hidden identities, a cross dressing girl, balls, spies and high speed boat chases. I never fully became engaged in the magic of this world. I was more interested in the historical aspects. But I loved following Lady Truthful and Charles on their adventures as they slowly come to terms with how they really feel about each other in a sweet slow romance.