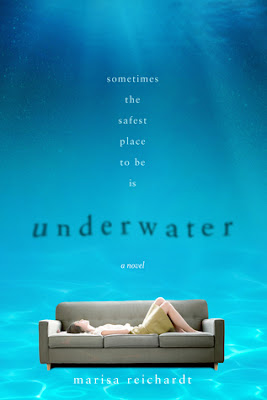 Book Description: Morgan didn’t mean to do anything wrong that day. Actually, she meant to do something right. But her kind act inadvertently played a role in a deadly tragedy. In order to move on, Morgan must learn to forgive—first someone who did something that might be unforgivable, and then, herself.But Morgan can’t move on. She can’t even move beyond the front door of the apartment she shares with her mother and little brother. Morgan feels like she’s underwater, unable to surface. Unable to see her friends. Unable to go to school. When it seems Morgan can’t hold her breath any longer, a new boy moves in next door. Evan reminds her of the salty ocean air and the rush she used to get from swimming. He might be just what she needs to help her reconnect with the world outside. Underwater is a powerful, hopeful debut novel about redemption, recovery, and finding the strength it takes to face your past and move on.
__________________________________________________________________________

Morgan is afraid. After surviving a school shooting, she feels safer in her small apartment, which she hasn't left for the past 6 months. But when Evan moves in next door, she begins to remember what life was like before. Slowly, as Morgan works though what happened that day in October, she searches for that person again.

Overall, I really enjoyed reading Underwater. Here are five thoughts I had after finishing this book: 1) Underwater is extremely timely. The MC Morgan asks the question during the book "don't you think it's ok to prepare yourself for the worst case scenario?" and it made me think about how my kindergartener (the same age as Morgan's little brother Ben) did a whole day active shooter drill at school so that they'd know what to do if one ever happened. Her class even got an award for handling the different scenarios so well. It's hard to believe that in addition to fire and hurricane drills, we're preparing our children to encounter guns. It is something that scares me, but I'm also thankful that schools are teaching children strategy and preparedness, and seeing the after affects of the shooting on Morgan, makes me thankful that my child's school is being proactive in preparedness.2) This book made me think a lot about how one person's destructive choice has lifetimes affects on all the people it touches. And bow everyone's experience and healing process is different. I appreciated the fact that Morgan's decision to stay in her house isn't criticized, because it's how she's coped with fear from that day, but we're also able to see her work her way out of that place. I also liked seeing the small glimpses of different characters who were affected by that October day.3) I really liked Morgan's relationship with Brenda her therapist. I loved seeing the trust they built, and the way Brenda pushes her forward.  It was rewarding to watch as Morgan makes real changes in her life, and great to see a therapy relationship really work well.4) The romance with Evan was sweet, and though they have some bumps along the way, this book doesn't have the Big Break at the same point in the story that most contemporaries do. I enjoyed the gradual building of their relationship, and the way discovering something new, in many ways, brings Morgan back to herself. However, I wish we'd have been able to see more of Morgan rebuilding her friendship with her school friends, in addition to a relationship with a new person. I especially wish we'd seen more of a focus on her growing friendship with Taylor, who has dealt with the shooting in a different way.
5) The parallels between Morgan and her father's journeys with PTSD, gave me another layer to consider, and I think it's realistic that his situation isn't resolved perfectly at the end.

6) A huge message in this book is Morgan forgiving the shooter to be able to move on and forgive herself. I think forgiveness is important for healing, and everyone's experiences are different, but I'm not sure that everyone would take the same approach as Morgan did, and I wish we'd gotten more of others' perspectives. For instance, I would have loved to have heard Taylor's. She just seemed awesome, and like she had a story to tell.

I didn't have much of any expectations when I picked up Underwater, but I was pleasantly surprised with how much this book made me consider a topic that is frighteningly prevalent in today's world. Morgan's journey was rewarding to watch, and I enjoyed the addition of the romance. I would have liked a few elements to have been fleshed out more, but overall, this was good read for me.