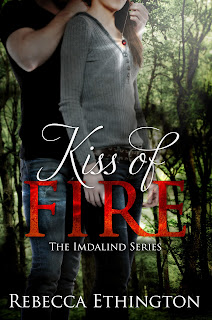 Joclyn Despain doesn't want anyone to notice her. After receiving a mysterious brand when she was a child, which led to the breakup of her parent's marriage and childhood ridicule, Joclyn has been working hard to blend into the background. She does everything she can to keep the mark - and herself - hidden from sight. She hides behind long hair, large clothing and hooded sweatshirts. The only person besides her mother who truly sees her is her best friend Ryland LaRue.

Joclyn and Ryland have known each other practically their whole lives, ever since Joclyn's mother began working as a chef for Ryland's wealthy father. They have grown up together and are each other's best friends. It was refreshing to read about a love interest that is not a mysterious new boy that pops into Joclyn's life, but someone with whom she shares a strong emotional bond, born of their years spent playing, growing, and knowing each other. Not surprisingly, both have started to look at each other in a different light and there is the possibility of something more developing between them.

However, everything is complicated by Ryland's father Edmund who doesn't seem to think that Joclyn is good enough for his privileged son. Although I never questioned whether or not I could trust Ryland, it is clear from the beginning that he is under a lot of pressure from his father and that he keeps much of that part of his life from Joclyn. Ryland is also going overseas to college in the fall, and Joclyn does not know how much time she has left with him. I really liked that this story appeared to start off with two kids with normal teenage worries, but then morphed quickly into something different and much bigger.

When I started Kiss of Fire, I had no idea where it was going, or how intense it would be by the end. The story started off slowly. Joclyn is painfully shy, introverted and bullied at school, but a few things happen that begin to bring her out of her shell. She starts to to realize the strength of her feelings for Ryland (and that he reciprocates them). She makes her first girl friend at school. And most importantly, she receives a mysterious letter from her absent father that results in a series of strange events that she she doesn't understand. Although I was a bit frustrated with Joclyn at first over her constant worry about someone seeing her mark, as the story progressed, I really enjoyed watching her begin to stand up for herself and become comfortable with who she is. Instead of letting everyone protect and save her, she starts to realize that she is strong too, especially in the second half of the book. Although Joclyn still has a lot of growing to do, I have high hopes that she will be something to behold in the books to come.

The second half of Kiss of Fire really picks up in exciting and surprising ways. There are several intense battle scenes, and the content of the story gets much darker as it progresses. I was impressed with how far the author took her story, though a lot of the information also broke my heart (she doesn't hesitate to punch you in the gut). Although there were some stereotypical characters - a mean girl and a super villain - many of the others became much more complex as the story went along. I am excited to spend more time with them in the future. This is still an approachable, very readable book, but these characters have dealt with a lot of deep issues, and the have some big obstacles ahead of them.

I did have some trouble with a few elements in the book, however. Although the story is strong, it could use another round of editing. Nothing major, but a lot of little details that added up over time. Also, though I enjoyed discovering a completely new paranormal society, and the world the author created definitely intrigued me, I still have a lot of questions about it. I'm a tad confused about the origin and nature of these beings and what exactly they're trying to accomplish (besides defeating the bad guy). This series is planned to be several books, so I'm hoping that we will learn more as it progresses.

Finally, let's talk a little more about the love story. I discussed Joclyn and Ryland above, and I really love the strength of their bond and how far they're willing to go to protect each other. But this book also hints at a possible love triangle (Please note that I am projecting  my personal worries here. I do not know what is going to happen next. Joclyn also does not strike me as the heroine to go back and forth between two people.). If you read this book, you will know who this new potential love interest is. Although I find him to be a very interesting character, he is still so much of a mystery that I'm not sure what I think of him yet. I don't distrust him, but I'm not certain of his endgame either. I also found some of his behavior and general level of physical comfort around Joclyn (him for her - not her for him) to be a tad off-putting. Thankfully, she felt the same way as I did. If he does not become a love interest, I am very intrigued about him and what his motives are. This story has surprised me thus far, and I'm eager for it to continue to do just that.

Kiss of Fire goes out with a bang, with a huge scene that is exciting, shocking and highly emotional. I am eager to get my hands on book 2 to find out what happens next. If you are love triangle wary, I will be reading and reviewing Eyes of Ember soon.

I am thrilled to have the opportunity to ask Rebecca Ethington a few questions today. I will admit that I wrote these before I read the book, and now I have about a bajillion more that I want to ask her! But her insight here is definitely tantalizing.

1) What's the first thing you'd like people to know about KISS OF FIRE?

Hmmmm… Probably that this isn’t your average Paranormal Romance. I’ve been told by quite a few reviewers that nothing is predictable about the book (that and people tend to cry a lot). I take pride in that. I want my stories to be new and unpredictable. I want them to keep you up, and stay with you.

Well you accomplished both of those things for me. Yikes! My poor heart.

For Joclyn, in the beginning, she is very introverted. She doesn’t want anyone to notice her, to talk to her. Her only friend is Ryland, and only because of their history and his persistence. By the end of the book she is starting to gain confidence in herself, and find her voice. It’s a long journey and one that can’t be completed in one book, but Joclyn is a very powerful person, she just has to find her strength.

Ryland is a bit more complex. He is a very caring, if not a little arrogant, guy that puts on a tough guy façade. (SPOILER PAST THIS POINT:) Ryland’s journey isn’t quite as great though, by the end that big heart has become a way for his father to use him, turning him into a monster.

I think I was having a Taylor Swift moment with this next question??? But the answer is interesting!

3) If you could only represent KISS OF FIRE using colors, what color(s) would you choose? What about for book 2?

Interesting question. For the whole series I would have to say the base color would be red. There is lots of hate, danger, violence, a love throughout the series – all heavy in the color red. For Kiss of Fire I would say the other main color would be Black, you can hide in black, danger comes in black, you can’t trust black, and all of those themes tend to be a very dominant in Kiss of Fire. For Eyes of Ember I would have to say gold, while not a complimentary color with red; together they really encompass the depth and shifting nature that book two has.

About Rebecca Ethington:
4) What is one thing you wish you could go back and tell your high school self?

Ha. High school was a weird time for me. I essentially dropped out so I could perform full time. And strangely I would probably tell my high school self to perform more. High school sucks. lol

5) If you were a paranormal being, what would it be?

Anything that flies; which is really weird because I am terrified of heights. I can’t even go on a standard Ferris Wheel without a panic attack.

6) If you were on the beach right now, would you be reading or playing in the water? (It is freezing where I live and I am imagining the sunshine)

It’s freezing here too, in fact it’s snowing as I write this. The only time I have been to a warm beach I spent the whole time in the water riding waves, which drove my kids crazy as they just wanted to go home. I would probably do that again. Heck, maybe I’ll have to learn to surf one of these days.

Oh I know all about snow here! I've never tried surfing, but I love to play in the water - although the cold New England waters aren't as fun as farther south. I'm a beach reader at heart, though.

Thanks for talking with me today, Rebecca!

Rebecca Ethington has been telling stories since she was small. First, with writing crude scripts, and then on stage with years of theatrical performances. The Imdalind Series is her first stint into the world of literary writing. Rebecca is a mother to two, and wife to her best friend of 14 years. She was born and raised in the mountains of Salt Lake City, and hasn’t found the desire to leave yet. Her days are spent writing, running, and enjoying life with her amazing family.

I am notoriously bad at getting these tour giveaway forms to show up.
Click HERE for the rafflecopter page.