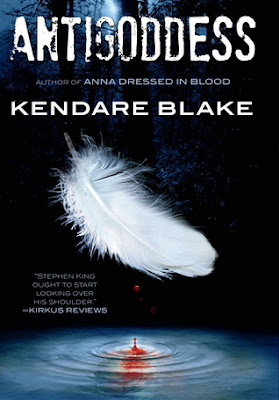 The Goddess War begins in Antigoddess, the first installment of the new series by acclaimed author of Anna Dressed in Blood, Kendare Blake.

Old Gods never die…
Or so Athena thought. But then the feathers started sprouting beneath her skin, invading her lungs like a strange cancer, and Hermes showed up with a fever eating away his flesh. So much for living a quiet eternity in perpetual health.
Desperately seeking the cause of their slow, miserable deaths, Athena and Hermes travel the world, gathering allies and discovering enemies both new and old. Their search leads them to Cassandra—an ordinary girl who was once an extraordinary prophetess, protected and loved by a god.
These days, Cassandra doesn’t involve herself in the business of gods—in fact, she doesn’t even know they exist. But she could be the key in a war that is only just beginning.
Because Hera, the queen of the gods, has aligned herself with other of the ancient Olympians, who are killing off rivals in an attempt to prolong their own lives. But these anti-gods have become corrupted in their desperation to survive, horrific caricatures of their former glory. Athena will need every advantage she can get, because immortals don’t just flicker out.
Every one of them dies in their own way. Some choke on feathers. Others become monsters. All of them rage against their last breath.
The Goddess War is about to begin. (From Goodreads)

Set-up:
The immortal gods are dying. Slowly. In individual ways meant to cause each of them the most psychological and physical harm. Athena, the mighty goddess of war and justice is painfully (and annoyingly) choking on the feathers of her beloved owls, which are literally growing inside her. Eventually, feathers will fill Athena’s lungs and cover body, and that will be that. Unless she can figure out why it’s happening and how to stop it. Determined to find answers, Athena travels with her brother Hermes to ask for help from her Aunt Demeter.

Battle lines are drawn and the Goddess War begins.

On the other side of the country, Cassandra is a sophomore in high school. She's in love with her boyfriend Aidan, hanging out with her best friend Andie, and making cash on the side at lunch-time with her ability to call a coin toss right every time. Although Cassandra’s psychic abilities have always been a neat party trick, recently she’s started experience strange visions that are far more serious and sinister. What is her connection to the mighty goddess?

Thoughts:
I’ve been dying to get my hands on Antigoddess ever since it eluded me at BEA. I’m a big fan of Greek mythology, and I was excited to find out how Kendare Blake, known for the gruesome and also amusing Anna Dressed in Blood, would tackle the subject. For the most part, it was a great success.

Unfortunately, however, the book started off slowly for two reasons. The first is that I think I’ve recently gotten a little oversaturated with Greek myths in YA. I had a bad case of Other Book Comparison Syndrome when I started Antigoddess. As much as I tried to avoid this slippery slope, I kept getting flashes of both Percy Jackson and another series. It took me some time and mental effort to stop comparing them. I kept thinking, wait that's not what that character is like! But then I'd remember this is a different story. That’s not really this book’s fault, but it definitely confused me at first and affected my reading.

Secondly, the split story-lines, told in alternating chapters, affected the pacing a lot. It wasn’t until about 50% that we get a convergence, although we know it’s coming far earlier. At that point the book really picks up the pace, and I was flying through the story by the time I reached the end. Although I was interested in both story-lines, it took me some time to engage in this book, because the narrative switches back and forth between Athena and Cassandra.

However, once I disentangled myself from those two issues, I really enjoyed Antigoddess. Blake infuses a darkness into her tale as she challenges the gods' most fundamental element - immortality. By confronting their inhumanity she creates a story with wonderfully grotesque elements. I love the concept of the gods' decaying immortality as something new and scary for them to face. It was certainly different from anything I'd read before. I also really like that this is their tale. Not just a retelling of an old myth, or a human's reaction to their scheming. The gods are changing, which is quite a rude awakening for them. All that is to say that despite my earlier comparison problems, Blake's story is a fresh and exciting addition to Greek based YA books.

Death is a frightening concept for creatures that have always been indestructible. Despite their constant competition with each other, gods have always been far above human fragility. Now that they’re dying, how different are they from the humans who once worshipped them? I enjoyed the ways that Athena, especially, began to face her own perspective on mortality and humanity.

I know I haven't really talked about any of the other characters besides Athena and Cassandra, and that was intentional. This book has a wonderful cast of characters, but many of them pop up in surprising (or horrifying) ways, and I think it's more fun to discover them for yourselves. But I already have several favorite secondaries, and I think this story is going to be even more awesome as it continues to introduce more of them.

I really loved both romances in this story. They are different from each other but also pretty unique and very intriguing. One is an established relationship, which we don’t often get to experience. However, I was able to connect right into Cassandra and Aidan’s romance. The other explores a concept that I’ve not seen before, although it feels like a natural progression. I like that both love stories felt important to the growth of the story and the characters (aka they weren't just in here to throw in a romance). I’m quite interested to see how both progress in the future. (Confession: there's something BIG I want to talk about in this section, but it's a huge spoiler. You'll know what I mean when you read the book.)

Antigoddess is the first book in the Goddess War series. It has a fairly settled ending that greatly unsettled me. It's also pretty exciting. Although we have some clues about where the series is headed, at this point it's difficult to predict what is coming next. That makes it an excellent book for a hearty discussion, which is my favorite. If you've read this book, what do you think is going to happen? (Please note SPOILERS here, or visit my Goodreads review and comment under a spoiler tag.)

Conclusion:
Despite some initial complications, I found Antigoddess to be a fresh and fascinating take on Greek mythology, and I'm definitely eager for book 2 Aristeia (look up that word and you'll have some clues about what is to come).