How to Love by Katie Cotugno 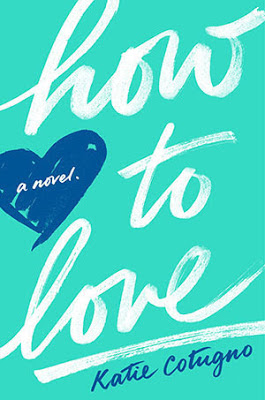 Before: Reena Montero has loved Sawyer LeGrande for as long as she can remember: as natural as breathing, as endless as time. But he’s never seemed to notice that Reena even exists…until one day, impossibly, he does. Reena and Sawyer fall in messy, complicated love. But then Sawyer disappears from their humid Florida town without a word, leaving a devastated—and pregnant—Reena behind.After: Almost three years have passed, and there’s a new love in Reena’s life: her daughter, Hannah. Reena’s gotten used to being without Sawyer, and she’s finally getting the hang of this strange, unexpected life. But just as swiftly and suddenly as he disappeared, Sawyer turns up again. Reena doesn’t want anything to do with him, though she’d be lying if she said Sawyer’s being back wasn’t stirring something in her. After everything that’s happened, can Reena really let herself love Sawyer LeGrande again?In this breathtaking debut, Katie Cotugno weaves together the story of one couple falling in love—twice. (From Goodreads)
_______________________________________________________________________

I had this great plan when I got back from BEA* to chronologically work my way through the books I picked up. Then I was looking through them one day and picked up How to Love, thinking, "I'll just read the first chapter and see what this is all about." I couldn't put it down. The story of these two people and their messy, complicated relationship, climbed right inside of me, and I couldn't move from this book on until I lived inside of them and experienced their story for myself.

How to Love is told in alternating chapters of Before and After, chronicling Reena and Sawyer’s chaotic love story in high school, and then after, when Sawyer returns from an unexplained 2-year absence. The two time periods are woven together seamlessly in a way that increases both the intensity of the heartbreak and the rush of falling in love. I hated both Reena and Sawyer at times, and I was incredibly proud of them in others. But I was completely immersed in their world the entire time I read, and I never stopped FEELING.

Before: Reena's been in love with Sawyer since she was a child. She has two dreams in life, dating him and traveling the world. One of those two goals seems much more attainable than the other, and it isn't a relationship with Sawyer. And yet, after years of feeling invisible to him, all of a sudden Sawyer notices her, and they form an immediate and explosive connection. But how long do they have until it all blows up, and what will the damage look like?

After: Reena is raising her daughter Hannah. She still dreams of getting away from her small town, but is learning to accept the life she's been given. Of course being head over heals in love with her daughter helps. What doesn't, is the judgement she still feels from her family for getting pregnant in the first place. But all of the settling she's worked so hard to achieve, disappears when Sawyer shows up back in town.

Before: Reena and Sawyer's relationship is a mess. They make terrible decisions, and I could see it all slowly unraveling around them. I wanted to tell Reena to stay away from  Sawyer. That the boy she's loved all her life is't worth it. But I remember being there as a teen, and I was rooting for them despite the dread I felt watching them. These two have a lot of very big issues that they need to work through, although they ignore them. But I could still sympathize with both of them. Though I constantly wanted to yell at Reena "DON'T DO THAT!!!" I still liked her, and I could definitely relate to her. And despite everything, I was desperate for them to figure it out.

After: What is great about this story is that while we are watching Reena and Sawyer fall in love for the first time, we simultaneously watch them reconnect again 3 years later. We see how they've changed and matured (and how they haven't). The contrast between the Before and After is incredible at times. It is breathtaking to see their transformation, and how well they fit the second time around. But healing takes time. These two have a lot of hurt between them, and some things can't be fixed. There were many times when I wondered if they'd ever be okay.

I've read a lot of stories like How to Love, but I've never read one quite like this. What I mean is that the guy leaving his high school girlfriend unexplainably and then showing up unannounced years later is a popular theme. For some reason I'm drawn to stories of first loves finding each other again, but I've always found something about them lacking. Perhaps I'm just pettier than most, but usually, it's that I'm still angry at him when the girl is ready to forgive. How to Love hits all the emotional points that I needed to read.

How to Love is an ode to first love. To being young and in love and making mistakes, but also what it means to grow up. This story is not about a girl saving a broken boy or vice versa. But it is about finding your own path, and how it changes both because of the choices you’ve made, and because of things out of your control. It is about holding on and letting go, and what it means to love and to forgive. And despite all the hurt and pain these characters cause themselves and each other, this story is about happiness and hope.


*I know I sound like a broken record, highlighting BEA over and over again. I apologize for this. It really was one of the biggest events of my year. It's also where I received most of the books I've been reading this summer, and I just find myself wanting to talk about my experience getting them, as much as the books themselves.