The Burning Sky by Sherry Thomas 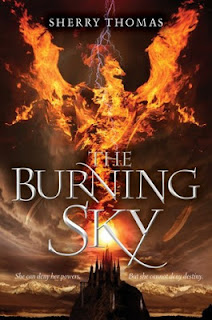 Iolanthe Seabourne is the greatest elemental mage of her generation—or so she's being told. The one prophesied for years to be the savior of The Realm. It is her duty and destiny to face and defeat the Bane, the greatest mage tyrant the world has ever known. A suicide task for anyone let alone a sixteen-year-old girl with no training, facing a prophecy that foretells a fiery clash to the death.Prince Titus of Elberon has sworn to protect Iolanthe at all costs but he's also a powerful mage committed to obliterating the Bane to revenge the death of his family—even if he must sacrifice both Iolanthe and himself to achieve his goal.But Titus makes the terrifying mistake of falling in love with the girl who should have been only a means to an end. Now, with the servants of the Bane closing in, he must choose between his mission and her life. (From Goodreads)
__________________________________________________________________________

"This is the story of a girl who fooled a thousand boys, a boy who fooled an entire country, a partnership that would change the fate of realms, and a power to challenge the greatest tyrant the world had ever known."*


Fantasy, fairy tales and magic.
A magical realm and Victorian London.
One girl and one boy.

The girl: Iolanthe Seabourne has been told that she's the greatest elemental mage of her generation. She doesn't really believe it. But after she powerfully displays her ability to the world, and ends up being hunted by for what she can do, she figures out that she needs to take herself seriously. Iolanthe has never known her parents and she's practically had to raise herself. She's smart, resourceful and highly adaptable, but doesn't trust easily. Iolanthe does a few things at the beginning of this story that bugged me, but knowing her past, I can't really blame her. I grew to understand her better as the story progressed.

The boy: Prince Titus of Eberon (one of the magical realms) has spent his life preparing to train and protect Iolanthe. Because of his royal status and young age, he is constantly watched and monitored. As a necessity for survival, Titus is always deceiving and out maneuvering those around him. He's also willing to do nearly anything to succeed - lie, betray even kill if he has to. Titus is my favorite character in this book. I wasn't sure about him at one point early on, but I love how the author was able to alter my feelings about him throughout the course of this story.

girl + boy: I really enjoyed watching Iolanthe and Titus get to know each other, especially the ways they surprised and challenged the other. The nature of Iolanthe and Titus's deception means that they can't trust anyone and must keep everyone at arms length. I think that's why none of the other characters stood out as much as they did, even though there are a lot of secondaries. I do think this started to change some at the end of the book, and hope that they are able to gain a bit more trust from others in the future installments. Inevitably, there is also a romance brewing between Iolanthe and Titus. It's an important part of this series, but these characters are strong individually and aren't spending all their time mooning over each other (thank goodness). I'm really interested to see how their relationship progresses through the series. While I enjoyed this romance, I'm hoping that it becomes more epic as the series continues.

Settings: One third of The Burning Sky takes place in a land of magic where children are regularly born with the ability to control the elements (called mages), a third of the book takes place in the Crucible (read the book to find out about that) and the other third takes place in Victorian London, with its rain and trains and boys boarding schools.  One of these schools is exactly the place that Titus hides Iolanthe. Dressed as a boy named Arthur Fairfax, Iolanthe gets to attend the illustrious Eton College, where royalty still educates its sons. She drinks tea, plays cricket and recites Latin, while secretly training to overtake the magical authorities who are advancing on her.

Themes: I really enjoyed the contrast between the elemental world and the industrial one, and how Iolanthe talks about magic use changing because of the modernization of the world. I also liked the questions raised about fate and free will. Does a seer witness the future or help to create it? Is it possible to contradict a vision? I hope both of these themes come more into play in the next books.

Conclusion: The Burning Sky introduces three unique worlds, each with their own set of rules, and I still feel like I've only scratched the surface of them. Also, to me it seemed like the magical rules conveniently (or inconveniently) changed occasionally, as needed in the story. Or at the very least, I feel as if I've still not mastered all the rules for all the locations. I can already tell I'm going to need to re-read this book before the next one comes out!


Although it took me a little bit of time to warm up to these characters and immerse myself in this complex world, The Burning Sky is a great beginning to what I'm hoping is going to be a really exciting trilogy.

*Quote taken from an Uncorrected Proof. May change in the final version.