The Summer Series Challenge is happening now!
Hosted by Heather @ The Flyleaf Review
Lauren @ Love is not a triangle
Asheley @ Into the Hall of Books
Follow #serieschallenge

If you are already a fan of Megan Whalen Turner's The Queen's Thief series, I have a huge treat for you. Prepare yourself to fall in love with Gen and his world again.

If you haven't read these books yet, or *gasp* have never heard of them, it's time to jump on the train.

Even more enticing, this is a guest post, written by Monstrous Beauty author Elizabeth Fama. Her insight and critical mind wows me every time, and her love for The Queen's Thief series is truly unique and inspiring. Plus, she's the nicest, most welcoming person ever.

Beth's enthusiasm for Gen and his story helped encourage me to read these books last December. They are now on the list of my forever favorites.

When Lauren invited me to write a post about any of the series I've loved--cheerfully assuming that I must have more than one--I felt a twinge of embarrassment. The truth is that I almost never read series in their entirety. I haven't even finished the Harry Potter series, which might actually be against the law for a young-adult writer.

My reading time has to serve double duty: I don't just read for pleasure, I also read for work. That means I read a lot of non-fiction for research, and I always read fiction with a critical eye: I'm studying the author's voice, characterization, setting, and plot, and asking, "What can I learn from this?" Most often I read the first book or two in a series and feel I've gleaned what I need. Even if I'd enjoy the subsequent books on a recreational basis, it's time to move on. So why is it that I've read all four books in Megan Whalen Turner's Queen's Thief series (some more than once)? It's because, quite simply, I continued to learn as I was reading. In fact, you can see Turner herself growing as she writes.

The Thief is a spare piece at around 68,500 words. That's the first thing you learn about Turner's style: every word counts. There's no fluff, and you need to concentrate in order to capture the nuance. The second thing you'll want to study is the opening--because this is how you get someone hooked in only a few pages. It's a deceptively quiet first chapter, but we immediately wonder: Why is the thief so mistrusted by the king that he's the only prisoner chained in his cell? Why is this royal adviser, the magus, interested in him? What treasure is so important that the king is conscripting the thief to steal it? Why did the thief brag with such assurance that he could escape from prison and then not do it? At the same time we see intriguing features of his character: he leaves the manacles on his hands even though he can slip out of them; before his arrest he apparently crawled at will, unnoticed, through the king's megaron without being detected; even when filthy and dominated, he sits in the finest, most comfortable chair in the magus's study; he notices everything, like feet standing behind a curtain, and the character of his interrogator, but seemingly doesn't act on it; he allows the magus to think he's dumb. Then there is the finesse of Turner's prose: how does a character, in first person, manage to keep so much of himself in reserve from readers, as if we can't be trusted yet? And the characterization: each player is fully fleshed out and beautifully flawed, like a real person. Eugenides (Gen) in particular is overly sensitive, passionately loyal, secretly insecure, full of bravado, with outsized skills that he uses with assuredness while still feeling unworthy. And finally, there's the subtlety of the relationships and Turner's unsurpassed ability to show emerging respect between people who are at odds with each other.

Pretty great, huh? But wait, now here's Book Two, The Queen of Attolia, and Turner tests herself--and us--by writing in third person. Oh, no! We're out of our beloved Gen's head! But now we're able to see multiple points of view--which we start to realize is essential to understanding the complex geo-political world Turner is developing. Irene, the queen of Attolia, is a real person, struggling with internal backstabbing, national interests, and personal emotions. We had already grown to love the queen of Eddis, but something becomes compelling about the wounded, guarded Attolia. And Turner does this by daring to slide gently into the POV of multiple characters in the same chapter--a technique that in other hands has the potential to remove us from the story. Here it's done so deftly that we instead see a counterpoint being established. In a kind of alternating dance, Gen is brooding about his wound and its deep implications, while Attolia is sleeping poorly and asking her ambassador for information from Eddis's court. "We begin to see," my friend Mark Flowers pointed out to me, "that Attolia is as obsessed with Gen as vice versa." And yet nothing is as simple as it seems, because only pages later we read:

[Nahuseresh:] "You could have killed this thief."
"I could have," Attolia agreed. "This has been as effective and more...satisfying." She was lying. She already wished that she'd killed Eugenides and been done with him.


Attolia apparently hates Gen, or more likely hates the very obsession we're witnessing bloom in her. These are complicated relationships evolving in front of us, and subtlety of emotion through economy of words is Turner's genius. Take for instance Gen's self-pity that he can no longer be a thief, and Eddis's awareness of it (and peculiar mix of empathy and intolerance), conveyed in five brief lines:

[Eddis] held out a hand, and he stepped down the stairs and across the throne room to take it and bow over it.
"My Queen," he said.
"My Thief," she answered.
He lifted his head. She squeezed his hand, and he forbore to argue with her.
"Dinner, I think," said the queen....


In Book Three, The King of Attolia, the narration switches again to be primarily from the point of view of--huh?--an unknown palace guard? Who the heck is Costis? But soon we see how clever this is: Costis doesn't trust Eugenides or like him; Gen has been forced on him, which we grow to realize is the metaphor for an entire country. Brilliant.

Finally, Book Four, A Conspiracy of Kings, is Sophos's story, the heir to Sounis, told mostly in first-person. The other characters are important players--and there’s a charming love story with obstacles--but we're squarely following Sophos's personal and political growth and the continuing overarching game of thrones (yes, I said it). My favorite part is, as usual, the masterful use of "more is less" in Turner's language; specifically, the way we see that Sophos is growing into a force to be reckoned with, even though he envisions himself as the boy who cried when his tutor smacked his fingers with a switch. Sophos says self-deprecating things like, "I screamed at them every curse I'd ever practiced when I was alone, trying to imitate the Thief of Eddis, but I doubt I sounded anything but hysterical." Meanwhile, he fails to internalize the fact that the slaver hired to kidnap him persists in calling him "lionhearted" and "lion," and street-tough men give him a wide berth. Sophos describes, but doesn't see, that he has to look down on almost everyone because of his new adult height. It's not until well into his own story that he realizes the "man-killer" moniker is not a misguided description of him; that he has in fact killed two men.

While writing this post I found myself re-reading portions of the series, surfacing a day later before I knew what had happened. Turner's work has that effect. As an author she seems to feed her own creative energy by experimenting with points-of-view, and by unfolding emotions and relationships sparely and subtly. The effect for readers is a journey that holds your attention, that challenges you to read carefully, that encourages repeated visits.

THANK YOU, Beth for that inspiring post!
Now I want to go back and reread the series.

Elizabeth Fama is the author of 3 books. OVERBOARD (Cricket Books, 2002) was an ALA Best Book for Young Adults, MONSTROUS BEAUTY was an Odyssey honor winner and on YALSA's 2013 Best Fiction for Young Adults list. Her upcoming novel, PLUS ONE will be published next spring by Farrar, Straus and Giroux (BYR).


Elizabeth Fama's upcoming novel Plus One releases next spring! Although there's no cover yet, here's the Edelweiss description. I'm salivating already!

"Divided by day and night and on the run from authorities, star-crossed young lovers unearth a sinister conspiracy in this compelling romantic thriller.

Set in a vivid alternate reality and peopled with complex, deeply human characters on both sides of the day-night divide, Plus One is a brilliantly imagined drama of individual liberty and civil rights, and a fast-paced romantic adventure story."

Add Plus One to your Goodreads. 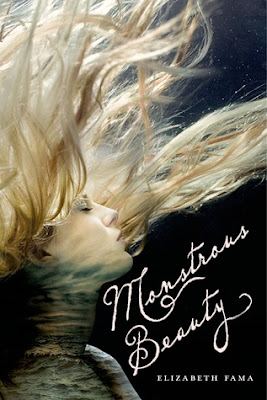 The paperback edition of Monstrous Beauty releases October 1, 2013.
If you win, your book will be mailed at that time.