Nowhere but Home by Liza Palmer 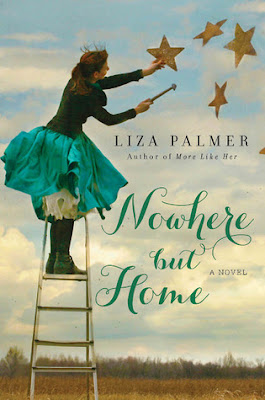 Summary: A brilliant, hilarious, and touching story with a Texas twist from Liza Palmer, author of Conversations With The Fat Girl (optioned for HBO)
Queenie Wake, a country girl from North Star, Texas, has just been fired from her job as a chef for not allowing a customer to use ketchup. Again. Now the only place she has to go is home to North Star. She can hope, maybe things will be different. Maybe her family's reputation as those Wake women will have been forgotten. It's been years since her mother-notorious for stealing your man, your car, and your rent money-was killed. And her sister, who as a teenager was branded as a gold-digging harlot after having a baby with local golden boy Wes McKay, is now the mother of the captain of the high school football team. It can't be that bad…
Who knew that people in small town Texas had such long memories? And of course Queenie wishes that her memory were a little spottier when feelings for her high school love, Everett Coburn, resurface. He broke her heart and made her leave town-can she risk her heart again?
At least she has a new job-sure it's cooking last meals for death row inmates but at least they don't complain!
But when secrets from the past emerge, will Queenie be able to stick by her family or will she leave home again? A fun-filled, touching story of food, football, and fooling around. (From Goodreads)
__________________________________________________________________________


I've talked about this before, but every summer my entire family goes on vacation, and the object is to relax on the beach for an entire week. For us, that inevitably means reading*, and we usually take stacks of books in which to indulge. Because we're all together, we often end up passing favorites around, and I have fond memories of many years of shared reads. This year, I made the executive decision that my mom and sisters, Allison and Christine, and I were all going to read Nowhere But Home by Liza Palmer. Thankfully, everyone liked the idea. I was told by several reliable reader friends that it was excellent. Then when I discovered it features food, family, football and forbidden romance, I knew it had to be a recipe for FUN. (Hint: I was right!)

My summary: In Nowhere But home, Queenie Wake (that's Queen Elizabeth Wake) is forced to move back to her hometown in Texas, after refusing to let a patron put ketchup on his eggs, and spectacularly losing her job as a chef in New York City. Going home is not an easy decision for Queenie. She's spent the past 10 years trying to run away from her town. Including her broken heart over her first and only love, Everett Coburn, and all the gossips that made her life there miserable. You see, Queenie's notorious mother ensured that her family's reputation was forever tarnished. Back in North Star, Queenie slowly reconnects with her family, takes an unconventional job at a prison, and begins to realizes there really is Nowhere But Home (sorry, I couldn't resist).

Because Queenie is a chef and loves to cook for others, the story includes several shared meals with family and friends. Once my mom, sisters and I all finished Nowhere But Home, we too had an excuse to enjoy a lovely dinner out to discuss the book. By eating together and chatting about this story, I'm pretty sure we experienced the book to the fullest possible measure. Except that our dinner didn't include Texas BBQ, which is sadly lacking in the North East. None of us were going to stay up all night cooking it either. Although Nowhere But Home was a delightful experience from cover to cover, it also brought us together, which is even better.

My plan was to write out our comunal review, though I'm not very good at writing down conversation, and ours was pretty much exclusively made up of spoilers anyway. But I did manage to capture a few highlights.

Some unspoilery highlights from our discussion:

Our most memorable scenes:

Then for our own amusement, we made a list of the movies of which we decided Nowhere But Home is a conglomeration:

Bottom line: Reading is fun, but having someone to share it with is even better.

*Confession: now that children are involved in our vacations, we get much less reading done than before. I actually didn't do a whole lot of reading on the beach this year. But we still had lots of fun together.
Posted by Lauren @ Love is not a triangle at 12:00 AM