The Oversight by Charlie Fletcher 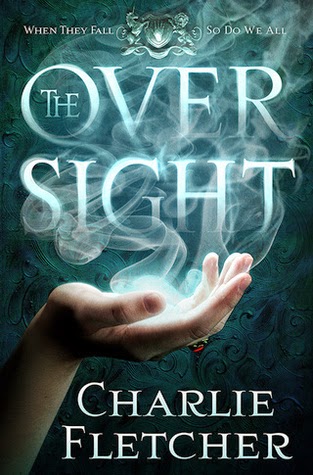 In this book there are a handful of good guys, a whole lot of scheming bad guys - both human and other, as well as many unknowns, including Lucy Harker the girl who begins it all. While reading The Oversight, I kept thinking that if Charles Dickens wanted to write about Fae, the book might have been set up something like this. Besides the very Dickensian 1840s London setting, we have quirky characters, many with names to match, a city teeming with people and fog, as well as a countryside with its meadows and mud, though no less perilous to danger and betrayals.

One fog filled night, the aforementioned Lucy arrives in a a sack, at a house on Wellclose Square in London. In so doing, she sets off a chain of events that affect a large group of people, and thus begins the plot of this story. Lucy is a trap. Though whether she is a conscious or unconscious part of the the trapping, remains to be seen. The home at which Lucy arrives belongs to The Oversight, an organization dedicated to upholding the Law and Lore of supranatural creatures (in simple terms they police the Fae in London). The five members of The Oversight, also called The Hand are the self proclaimed good guys and have dwindled quite a bit in numbers in recent years. Some would like to see that number dwindle even further, hence the trap.

As this book progresses we are privy to what is happening on both of the story, as well as in between. Watching the bad guys close in and the often unsuspecting good guys try to hold their line, continually increasing the intensity of the storytelling. Thankfully, the members of The Hand are really good at what they do. Although Lucy is the catalyst for the action in this book, she is only one of many players. Seeing all angles of this story, means continuously switching viewpoints and no main character. (Don't worry, there is a helpful cast list at the start of this book.)

However, this many people to follow, along with all the different plots attached to them, had me feeling at times like I was unable to grasp one thing. Especially in this first series installment, where so much of the larger puzzle was unknown. Though I knew all the pieces had a purpose, following so many at once meant it took me longer to emotionally attach to any one character. This is a requirement for me to fully enjoy a book, and thankfully, by the end of this installment, I was successful with some of them (some I decidedly want to stay away from). But it took a fair bit of the story to get there. There were also parts along the way that were a bit slow and left me itchy for something to happen, or stressed because the narration would change again just when something was about to occur. Even so, the storytelling method was very effective at heightening the tension in this book. It was like ever tightening cogs, that left you holding your breath for when the machine would all of a sudden take off (or explode).

The end of this book is exciting and solves some questions while leaving several open. We find out on which side most every character stands. Though there are still a very few unknowns.  This is definitely a set up book in many ways, and I think it will be easier to engage in the next installment after learning all these characters. But as a whole I enjoyed this book a lot. It was a bit different from what I've read recently, so it felt fresh. And it's historical setting reminded me of the classics I used to read, so it also felt like a little bit of literary nostalgia. I very much liked that mix.